Pituitary apoplexy is a rare but serious condition caused by hemorrhage or infarction of the pituitary gland (1). Generally, it presents with acute onset headache, visual defects, ophthalmoplegia and altered mental status, which rapidly progress from hours to days. (2). Due to its pathogenic complexity, infrequent complications can masquerade the clinical picture, leading to wrong diagnoses and management. To the best of our knowledge, this is the first literature report describing the simultaneous occurrence of a stroke mimic and Takotsubo syndrome as the clinical presentation of pituitary apoplexy. We present the following article in accordance with the CARE reporting checklist (available at https://jeccm.amegroups.com/article/view/10.21037/jeccm-22-4/rc).

An 80-year-old man presented to the Emergency Department with a one-day complaint of dull frontal headache, drowsiness and vomiting. He had a history of atrial fibrillation on warfarin and mild cognitive impairment. The patient underwent a brain CT scan, which documented a mass in the suprasellar cistern, with a lobulation extending to the right carotid artery (Figure 1). On the initial medical evaluation, he was lethargic but arousable on verbal stimuli, able to obey command and confused but capable of answering questions, scoring 13 on Glasgow Coma Scale (E3, V4, M6), with normal vital signs. An electrocardiogram (ECG) was performed and it showed inverted T waves in V4–V6, DI and AVL leads, and isodiphasic T waves in V1–V3 leads. Myocardial ischemia was then suspected, a troponin curve was requested and an intravenous loading dose of salicylic acid was administered. The troponin curve peaked at 5,718 ng/L. On re-evaluation, vital signs had deteriorated, with hypotension, atrial fibrillation with rapid ventricular response, which was treated with intravenous metoprolol, and desaturation which required high flow oxygen administration; also, the ECG worsened with T wave inversion in antero-lateral leads (Figure 2). Neurological examination now revealed a new-onset left facio-brachio-crural hemiparesis. The neurology consultation could not exclude the occurrence of an acute ischemic stroke in the right middle cerebral artery territory with no indication for fibrinolysis. To determine the patient’s eligibility to mechanical thrombectomy, he underwent CT angiography of the intracranial and supra-aortic arteries, which was normal. A subsequent brain MRI found no evidence of acute ischemic lesions on DWI sequences, but revealed a pituitary macroadenoma with inhomogeneous contrast enhancement, a necrotic component and signs of recent bleeding (Figure 3A,3B). The lesion caused right cavernous sinus invasion and encased the cavernous segment of the internal carotid artery, the lumen of which remained patent. A working diagnosis of pituitary apoplexy with secondary adrenal insufficiency was made and subsequently confirmed by laboratory tests. A neurosurgery evaluation excluded indications for surgical intervention on the expansive lesion, because of the patient’s age and comorbidities. The patient was started on intravenous hydrocortisone with almost immediate increased alertness, improvement of hematochemical parameters and gradual subsidence of focal neurological signs. To further evaluate the patient’s heart function, he underwent a transthoracic echocardiography, which revealed left ventricular apex akinesia with an apical ballooning phenomenon and a moderate-severe left ventricular ejection fraction reduction (33%). The following coronary angiography displayed no evidence of haemodinamically significant stenoses, as seen in Takotsubo syndrome (Figure 4). The patient was started on cortisone acetate, thyroid replacement therapy and bisoprolol. Due to signs of intracranial bleeding and no evidence of cerebral or myocardial infarction, antiplatelet therapy was immediately stopped. The patient was discharged from hospital with a diagnosis of pituitary apoplexy caused by bleeding of a non-secreting macroadenoma, secondary adrenal insufficiency, Takotsubo syndrome and transient left-sided hemiparesis. At the 1-month follow-up evaluation, pituitary function was found to be well compensated by replacement therapy, so the patient was kept on cortisone acetate and levothyroxine; heart function had fully recovered so bisoprolol was stopped. Neurological examination was normal and a control brain CT scan displayed full reabsorption of the hemorrhage, so warfarin for atrial fibrillation was restarted. The patient was reassessed one year later and no signs of relapse were found. 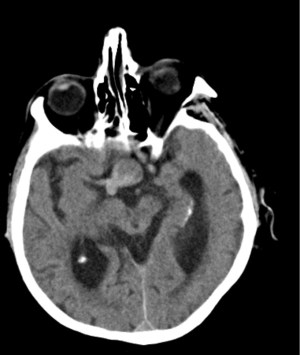 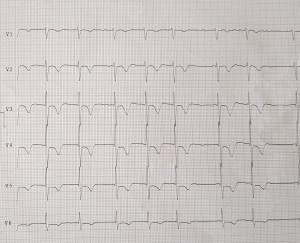 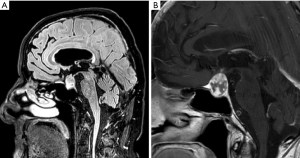 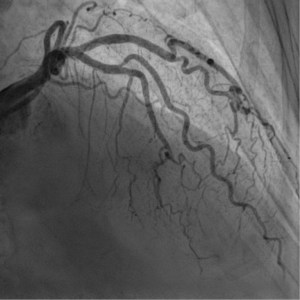 All procedures performed in this study were in accordance with the ethical standards of the institutional and/or national research committee(s) and with the Helsinki Declaration (as revised in 2013). Verbal informed consent was obtained from the patient for publication of this case report and accompanying images.

Pituitary apoplexy is a rare clinical syndrome caused by infarction and/or hemorrhage of the pituitary gland, typically occurring in the context of pituitary adenomas (1,2). It presents acutely with sudden headache and vomiting, visual disturbances and altered mental status. Non-functioning macroadenomas are most often responsible for pituitary apoplexy (2,3). Abnormal tumor vascularization probably plays a role in its pathophysiology, but additional factors, such as anticoagulation, may trigger the onset of this condition (4). Once clinical suspicion is established, diagnosis relies on biochemical evaluation, typically showing reduced levels of pituitary hormones and hyponatremia and neuroradiological testing, with CT being less sensitive than MRI (5-7). Treatment is directed towards hemodynamic stabilization, electrolyte correction and hormone replacement therapy; in some cases, surgical management is needed (6-8).

Cerebrovascular involvement in pituitary apoplexy has rarely been described and is associated with poor outcome (9,10). Mechanisms leading to cerebral infarction are mainly represented by internal carotid artery compression in its cavernous or supraclinoid portion and vasospasm due to subarachnoid hemorrhage (11,12). The possibility of acute ischemic stroke in the context of pituitary apoplexy should therefore be kept in mind by clinicians and it should prompt urgent neuroradiological testing. Interestingly, even though our patient presented with left-sided facio-brachio-crural hemiparesis, no acute ischemic lesions were described on diffusion brain MRI, nor was reduction of arterial caliber observed on either contrast-enhanced CT and MRI cerebral angiography. While a transient compression of the internal carotid artery leading to cerebral hypoperfusion was hypothesized, this explanation for the acute onset of focal neurological signs seems unlikely, because the internal carotid artery lumen was found to be patent at urgent neuroradiological testing. Moreover, the neurological deficits lasted for more than 24 hours, without evidence of cerebral infarction on diffusion brain MRI and they gradually resolved in a few days with hormone replacement therapy and correction of dysionemias. We therefore speculate that the endocrine, metabolic and electrolyte disturbances, especially hyponatremia, played a relevant role in mimicking an acute ischemic stroke.

Despite the rarity of this clinical scenario, we are aware that a complete diagnostic work-up should have included an EEG, to rule out the possibility of a seizure or a prolonged postictal phase manifesting with stroke-like symptoms; however, our patient fully recovered without antiepileptic therapy and no epileptic motor phenomena were noted.

Takotsubo cardiomyopathy has been described in both neurological and endocrine conditions, including pituitary apoplexy (13,14). It is characterized by mild troponin elevation, ECG changes and transient apical left ventricular dysfunction (15). It develops in the absence of epicardial coronary disease (16,17). The pathophysiology of Takotsubo syndrome has yet to be fully understood, but one proposed mechanism revolves around toxic direct effect of high levels of catecholamines on apex cardiomyocytes (18). Albeit reversible, it can present with haemodynamic instability and therefore needs prompt recognition and support treatment (19). In our case, haemodynamic worsening occurred acutely with T wave inversion and troponin elevation, which led to a working diagnosis of myocardial ischemia and to the risky administration of a loading dose of salicylic acid in the context of intracranial bleeding.

In conclusion, pituitary apoplexy is an uncommon yet life-threatening condition, that needs to be rapidly recognized and treated. To the best of our knowledge, a stroke mimic has never been presented in relation to this disease; moreover, this is the first literature report describing the simultaneous occurrence of a stroke mimic and Takotsubo syndrome as the clinical presentation of pituitary apoplexy. Emergency physicians should be aware that, due to its pathogenic complexity, unusual complications can confound the clinical picture, easily leading to wrong diagnoses and, in turn, mismanagement.

Reporting Checklist: The authors have completed the CARE reporting checklist. Available at https://jeccm.amegroups.com/article/view/10.21037/jeccm-22-4/rc

Conflicts of Interest: Both authors have completed the ICMJE uniform disclosure form (https://jeccm.amegroups.com/article/view/10.21037/jeccm-22-4/coif). The authors have no conflicts of interest to declare.

Ethical Statement: The authors are accountable for all aspects of the work in ensuring that questions related to the accuracy or integrity of any part of the work are appropriately investigated and resolved. All procedures performed in this study were in accordance with the ethical standards of the institutional and/or national research committee(s) and with the Helsinki Declaration (as revised in 2013). Verbal informed consent was obtained from the patient for publication of this case report and accompanying images.