Zinc is an essential trace element in the body and has crucial roles in numerous enzymatic and metabolic processes, including gene transcription, immunoregulation, cellular restoration and protein synthesis (1). The liver plays an important role in zinc homeostasis. Zinc levels are abnormally decreased in chronic liver disease (CLD) and may lead to metabolic complications such as hepatic encephalopathy (2). Hypozincaemia is observed in the critically ill and is associated with increased mortality and illness severity scores (3). Zinc deficiency in CLD patients may increase their susceptibility to endotoxaemia by increasing intestinal barrier permeability via oxidative stress pathways (4). Epithelial dysfunction causing intestinal hyperpermeability with alteration of intestinal microbiota is also described in critical illness. This leads to local and distant tissue injury resulting in multiple organ dysfunction syndrome (5).

We present the following article in accordance with the STROBE reporting checklist (available at https://dx.doi.org/10.21037/jeccm-21-48).

Sixty-nine critically ill patients with CLD formed the CI-CLD group, whereas 73 critically ill controls without a background of CLD formed the CI-CONTROL group. The study was conducted between November 2011 and December 2015 across two university hospital ICUs. Patients with established CLD were enrolled on ICU admission. Controls were matched for age, gender, admission diagnosis and organ support required; admitted to ICU concurrently without any history of CLD or significant alcohol intake. Patients with end stage renal failure on regular haemodialysis, receiving parenteral nutrition and with a history of receiving radiologic contrast in the previous 4 days were excluded from the study. The study was conducted in accordance with the Declaration of Helsinki (as revised in 2013). The study was approved by the Hospital Human Research and Ethics Committee of The Queen Elizabeth Hospital (ethical approval ID number 2011121). Informed consent was taken from all the patients.

In all subjects, blood samples were collected at admission to examine haemoglobin, white cell count, and platelet count, coagulation profile including international normalised ratio (INR), C-reactive protein, liver functions and renal function. Zinc levels were collected during ICU admission on inclusion in the study. Blood for zinc levels were collected in metal-free vacutainer tubes, at the same time point (0600) in all patients. Plasma zinc was measured by mass spectrometry which has a validated normal range (9.02–11.32 µmol/L) (7). Twenty-four-hour urinary zinc levels were measured in a subgroup of patients with normal renal function in both groups (36% of CI-CLD patients, 33% of CI-CONTROLs). Urine was collected in a specialised metal-free container with 50 mL dilute nitric acid. All patients were followed up for the length of stay (LOS) in ICU and hospital as well as for mortality in ICU, in-hospital and at 6 months post-discharge, using hospital patient information systems.

Survival was estimated using the Kaplan-Meier method, and differences in survival between groups were assessed using the log-rank test.

Cox proportional-hazard regression analysis was used to evaluate the association between variables and mortality, with an adjusted P value <0.05 considered statistically significant. The hazard ratios (HRs) and 95% confidence intervals (CIs) were calculated. Within the Cox model the explained variation (R2) was assessed using the user-written Stata™ module “str2d”, with 95% CI determined by the bootstrap procedure (1,000 samples) (8). Variable collinearity was evaluated by the condition number (in non-linear models, values >15) and the correlation between variables (rho >0.8). Non-linearity of continuous covariate effect was determined using multivariate fractional polynomials. Model development was guided by clinical expert opinion, progressive reduction of Akaike Information Criteria and Bayesian Information Criteria.

Patient demographics and admission diagnoses were well matched (Table 1). APACHE-III and SOFA scores were significantly higher in the CLD group, reflected by high mean MELD scores of 26.4±7.8 (Table 1). Hypoalbuminaemia and hyperammonaemia were noted in the CI-CLD group. Serum creatinine was not different between the groups (Table 1). The requirement of organ support with vasopressors, mechanical ventilation and renal replacement therapy was similar in both study groups. Predictably, coagulopathy was statistically significant in the CI-CLD group as compared to CI-CONTROL (mean INR 2.3 vs. 1.5, P=0.010) (Table 2). 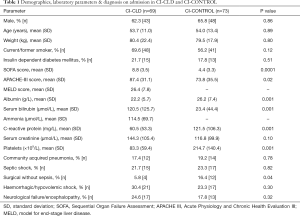 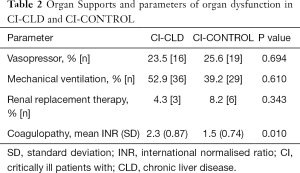 Plasma zinc concentrations in CI-CLD patients were significantly lower than CI-CONTROLs (CI-CLD vs. CI-CONTROLs, 5.3±2.2 vs. 8.1±2.9 µmol/L, P=0.0001) (Table 3). Notably, patients in the CI-CONTROL group had zinc levels either low or at the lower limit of normality. Time to collection of zinc levels from ICU admission varied from 0 to 30 days [P50 2 days, interquartile range (IQR) 4 days]. There was a time relationship of zinc assay (β coefficient 0.156, P=0.003), but the explained variance (R2) of plasma zinc levels by time to assay was small at 0.06. 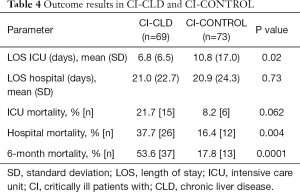 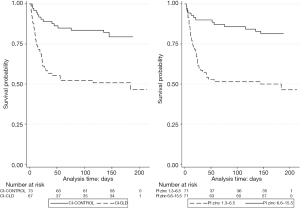 Zinc deficiency is common in CLD, reported in up to 83% of patients (9). Normally, zinc is absorbed in the small intestine, 11% being stored in the liver and skin and is excreted by the kidneys. Zinc transporters play a key role in absorption, excretion and transport of zinc (4,11). Patients with CLD have decreased zinc absorption, altered zinc transport, decreased hepatic content of zinc and increased urinary zinc excretion (9).

Hypozincaemia, as observed in CI-CONTROL, is noted in 95% of ICU patients (12). This is partly due to increased tissue sequestration of zinc as an acute phase response in critical illness and is associated with reduced survival (9). In an experimental murine model of polymicrobial sepsis, subacute zinc deficiency was associated with increased systemic inflammation, organ damage and mortality (13). Suboptimal zinc concentrations in critical illness with increased oxidative stress and inflammatory biomarkers may contribute to damage of crucial proteins (14).

Urinary zinc excretion is normally inhibited in states of acute severe dietary zinc deficiency (15). Contrarily, urinary zinc levels were high in both study groups. Tissue zinc redistribution, hypoalbuminaemia and diuretic use (all common in both critical illness and CLD) result in increased urinary zinc losses irrespective of its intake (16,17). In hypoalbuminaemia, unbound zinc binds to amino acids such as alpha-2-macroglobulin (itself an acute phase reactant) with increased affinity to zinc, leading to increased zinc excretion (18). This association is so compelling that hypoalbuminaemia is used as a surrogate marker of underlying zinc deficiency in CLD (19).

We unsurprisingly observed hyperammonaemia in the CI-CLD group (114.5±69.7 µmol/L, reference range <50 µmol/L) (20). Zinc deficiency has been linked with altered ammonia metabolism since 1978, when Prasad et al. unexpectedly discovered hyperammonaemia in volunteers who consumed a zinc-free diet (21). Zinc deficiency reduces hepatic ornithine transcarboxylase activity, a crucial enzyme in the urea cycle required for the metabolism of ammonia. Randomised control trial data had demonstrated the effect of zinc supplementation in reducing ammonia levels in patients with CLD (22).

Hyperbilirubinaemia, as noted in our study, had previously shown a negative correlation with plasma zinc concentration in CLD (19). Zinc inhibits the enterohepatic circulation of bilirubin, leading to higher total circulating bilirubin levels in zinc deficiency (23). Thus, zinc supplementation is used to treat hyperbilirubinemia in specific high-risk patient groups (24). Hyperbilirubinemia is also common in critical illness and linked to increased mortality despite a lack of explanation as to its mechanism (25). Vanwijngaerden et al. reported the absence of association between cholestasis and inflammation in critically ill patients while confirming the strong association between the pro-inflammatory state of critical illness with hyperbilirubinemia, most likely due to altered handling of bile acids (26) which has been associated with zinc deficiency (24).

Declining plasma zinc levels were previously associated with increased illness severity scores in severe infections and increased mortality in ICU (27,28). It concurs with our findings of SOFA score and zinc levels as predictors of survival at 6 months. The observed association of hypozincaemia with increased mortality may suggest its prognostic value. Disruption of zinc’s critical role in antioxidant defence, DNA repair and immunoregulation in CLD patients (29), further worsened by critical illness may explain reduced survival in CI-CLD group. The study site difference identified in predictability of outcome was presumably related to our small study population and case-mix.

There is an established body of literature outlining the value of zinc in maintaining homeostasis, as well as the harmful sequelae of zinc deficiency (8,11,13,14). However, the effect of zinc supplementation in CI-CLD patients remains unclear and has not been investigated. Current guidelines do not make any specific recommendation regarding zinc supplementation. A systematic review by Diglio et al. concluded that zinc supplementation in CLD did not show benefit in clinical improvement or halting of disease progression, except possible benefit in hepatic encephalopathy (22,30). Similarly, supplemental antioxidants in critically ill mechanically ventilated patients with multisystem organ failure did not improve clinical outcome (31).

Although to our knowledge, this study is the first to assess the status of zinc levels in CLD patients with acute critical illness, it has some limitations. Only 1/3 of patients had urinary zinc analysis, so the results cannot be generalised. Ammonia levels were assessed only in patients with hepatic pathology. Critically ill populations may possess risk factors for non-hepatic causes for hyperammonaemia (32). Our small sample size, more recruitment of CI-CONTROL from one site and differences in case-mix may have affected the study outcome. Zinc levels were not repeated on discharge from ICU to ascertain if levels showed any improvement upon resolution of acute illness. It is possible that CLD patients predisposed to chronically low zinc levels may drop their levels further during an acute episode, while controls may have normal baseline zinc levels and merely drop acutely during illness.

In conclusion, this study demonstrates significantly low plasma zinc levels in acutely ill patients with CLD compared to hypozincaemia seen in other critically ill patients. Our data identifies the association of hypozincaemia with increased ICU, hospital and 6-month mortality. A large clinical trial is required to evaluate role of monitoring zinc levels and maintenance of normal zinc levels with supplementation in CI-CLD patients.

Reporting Checklist: The authors have completed the STROBE reporting checklist. Available at https://dx.doi.org/10.21037/jeccm-21-48

Conflicts of Interest: All authors have completed the ICMJE uniform disclosure form (available at https://dx.doi.org/10.21037/jeccm-21-48). The authors have no conflicts of interest to declare.

Ethical Statement: The authors are accountable for all aspects of the work in ensuring that questions related to the accuracy or integrity of any part of the work are appropriately investigated and resolved. The study was conducted in accordance with the Declaration of Helsinki (as revised in 2013). The study was approved by the Hospital Human Research and Ethics Committee of The Queen Elizabeth Hospital (Ethical Approval ID Number 2011121). Informed consent was taken from all the patients.