Wide complex tachycardia is commonly encountered by emergency and critical care providers. While ventricular tachycardia is the most common cause of wide complex tachycardia, supraventricular tachycardias account for roughly 20% of these tachydysrhythmias (1). The challenge providers face when encountering a patient with wide complex tachycardia is two-fold. First, differentiating between ventricular and supraventricular etiologies is difficult, with only complex and imperfect algorithms existing. Second, and most importantly, improper diagnosis can lead to inappropriate therapy with increased morbidity and mortality. In 2019, there were 5 reported deaths and 375 cases of major morbidity associated with diphenhydramine overdose in the United States (2). Death generally occurs after arrythmias from sodium and potassium channel blockade (3). Major sources of morbidity are also related to sodium channel blockade and include status epilepticus and sequelae of cardiogenic shock. Logically, overcoming sodium channel blockade with hypertonic sodium bicarbonate would improve both morbidity and mortality. The benefit of this therapy has been demonstrated in animal models and has been reported in human case reports (4).

The combination of difficult diagnostic algorithms and significant consequences to misdiagnosis make a thorough understanding of the pathophysiology of these two conditions essential. Fortunately, a thorough history and physical exam, with a focus on possible ingestions, can aid in elucidating the etiology of wide complex tachycardia. The assumption that a wide and regular tachydysrhythmia is ventricular in origin until proven otherwise is a reasonable approach for emergency medicine and critical care providers to take. However, in cases of ingestions where the etiology of the dysrhythmia is secondary to sodium channel blockade, this approach may be ineffective. A case report of massive diphenhydramine overdose by Schwarz et al. reveals a patient with a wide and regular tachycardia that was refractory to amiodarone and cardioversion. This patient developed cardiac arrest and when return of spontaneous circulation was obtained, had a persistently prolonged QT interval that was responsive only to sodium bicarbonate and intravenous fat emulsion (5). This patient did not respond to typical ventricular tachycardia treatments and required intervention aimed at countering the direct toxic effects of diphenhydramine’s sodium channel blockade.

Here we report a case, in accordance with the CARE reporting checklist (available at http://dx.doi.org/10.21037/jeccm-21-33), of massive diphenhydramine overdose that exhibited anticholinergic effects along with wide complex tachycardia that was initially interpreted as ventricular tachycardia by ancillary staff.

A 19-year-old female presented to a community emergency department (ED) with altered mental status. Emergency medical services (EMS) had arrived at the patient’s home 30 minutes earlier and found three empty bottles of diphenhydramine scattered around her room. Per EMS, the patient was breathing spontaneously throughout transport but was difficult to arouse, not responding to questioning, and seemed to be hallucinating. Per the patient’s father, the patient had no access to other pills with no prescription medications in the home; he estimated the diphenhydramine ingestion to consist of roughly 150 tablets of unknown strength. Time of ingestion was estimated to be 1 hour prior to EMS arrival to the home. No relevant social or family history was reported. Upon arrival to the ED, patient vital signs were as follows; blood pressure 139/82 mmHg, heart rate 162 beats per minute, respiratory rate 24 breaths per minute, temperature 98.5 degrees Fahrenheit orally, and oxygen saturation 100% on room air. Examination revealed a disoriented and altered female reaching out in space. Head, eyes, ears, nose, and throat (HEENT) exam revealed dilated pupils bilaterally and dry mucus membranes. Cardiopulmonary exam was significant for tachycardia without murmur and tachypnea with clear breath sounds bilaterally. Abdominal exam revealed a soft non-tender abdomen with decreased bowel sounds. Dermatologic exam was significant for diffusely dry and flushed skin. Neurologic exam was without clonus. Initial laboratory evaluation returned with a normal urinalysis. Urine and serum toxicology assays were negative for acetaminophen, amphetamines, barbiturates, benzodiazepines, cannabinoids, cocaine, ethanol, opiates, and salicylates. Initial electrocardiogram (EKG) was significant for sinus tachycardia with a rate of 149 beats per minute and QRS duration of 80 ms (Figure 1). 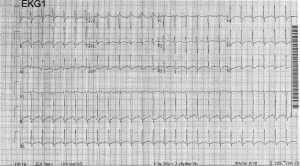 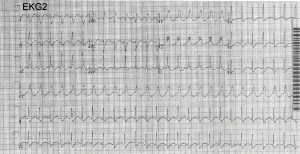 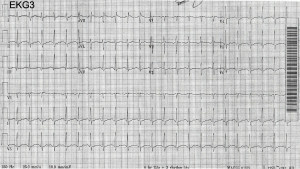 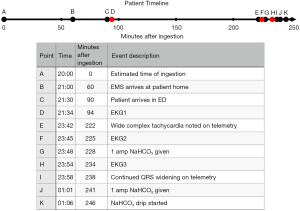 Once stable, the patient was admitted to the intensive care unit for close observation. This patient remained on the sodium bicarbonate drip for 12 hours, after which her mental status and tachycardia improved. She was discharged to an inpatient psychiatric facility on day 2 and is now doing well with no long-term morbidity.

All procedures performed in studies involving human participants were in accordance with the ethical standards of the institutional and/or national research committee(s) and with the Helsinki Declaration (as revised in 2013). Written informed consent was obtained from the patient.

This patient presented with the classic anticholinergic toxidrome; dry flushed skin, mydriasis, anhidrosis, altered mental status, tachycardia, and decreased bowel sounds (6). While diphenhydramine overdose is classically associated with anticholinergic symptoms, massive overdose can result in cardiac toxicity due to its ability to block fast sodium channels in a manner mechanistically similar to VW type IA antidysrhythmic agents such as procainamide (4).

It is important to understand the pathophysiology of widened QRS in diphenhydramine toxicity and to differentiate it from widened QRS in ventricular tachycardia, as these two conditions are managed differently in the emergency and critical care settings. The widened QRS seen in diphenhydramine toxicity is due to a blockade of sodium channels in depolarizing cardiac myocytes. The specialized conducting cells of the His-Purkinje system are most impacted by this delay in depolarization. As a result, these cells do not transmit electrical signals as efficiently, which translates to a prolonged duration of ventricular depolarization and a widened QRS complex. In these cases, the sinoatrial (SA) node still determines rate, and the tachycardia is due to decreased parasympathetic tone with relatively unopposed sympathetic input.

Conversely, the widened QRS seen in ventricular tachycardia is due to the impulse for contraction developing in an irritable ventricular focus rather than the SA node. Because the electrical impulse does not originate in the atria, it does not utilize the electrical conduction highway of the His-Purkinje system. Instead, electrical impulses are transferred inefficiently from myocyte to myocyte. The inefficient conduction between myocytes results in slower depolarization of the ventricular mass and a widened QRS complex. Treatment involves suppressing the irritable ventricular focus with electrical cardioversion or antiarrhythmic medications to allow the heart to regain normal automaticity.

Diphenhydramine-induced cardiotoxicity from massive ingestion is physiologically similar to TCA-overdose; both acting analogously to VW type IA antiarrhythmic agents. While sodium bicarbonate is a well-known antidote for TCA overdose, it is less commonly thought of as treatment for QRS widening secondary to diphenhydramine overdose (7). However, due to the similarities of these medications in terms of the mechanism of cardiotoxicity, the use of sodium bicarbonate makes intuitive sense. Furthermore, because this QRS widening results form mechanisms similar to VW type IA antiarrhythmics, treatment with another VW class of antiarrhythmic (such as amiodarone) would be contraindicated, as all of these agents have a potential to worsen QRS widening.

This case of massive diphenhydramine overdose emphasizes the importance of the emergency and critical care providers’ ability to differentiate between etiologies of wide complex tachycardia in order to provide optimum care and decrease morbidity and mortality. This patient suffered from a massive diphenhydramine overdose that resulted in a wide complex tachycardia and understanding that the etiology of this widened QRS was due to sodium channel blockade, rather than an irritable ventricular focus, lead to the correct management with sodium bicarbonate. A thorough understanding of the underlying pathophysiology is crucial to ensure critical care and emergency medicine providers provide the best care possible.

Reporting Checklist: The authors have completed the CARE reporting checklist. Available at http://dx.doi.org/10.21037/jeccm-21-33

Conflicts of Interest: All authors have completed the ICMJE uniform disclosure form (available at http://dx.doi.org/10.21037/jeccm-21-33). The authors have no conflicts of interest to declare.

Ethical Statement: The authors are accountable for all aspects of the work in ensuring that questions related to the accuracy or integrity of any part of the work are appropriately investigated and resolved. All procedures performed in studies involving human participants were in accordance with the ethical standards of the institutional and/or national research committee(s) and with the Helsinki Declaration (as revised in 2013). Written informed consent was obtained from the patient.