Blood loss from major trauma is a significant cause of morbidity and mortality (1). Tranexamic acid (TXA) administration is indicated for trauma patients suspected of major haemorrhage (2). NICE recommends “Use intravenous tranexamic acid as soon as possible in patients with major trauma and active or suspected active bleeding” (3).

Two large studies have shown that the sooner TXA is administered, the greater the clinical benefit (4,5). A meta-analysis suggests that the survival benefit of administering TXA decreasing 10% for every 15 minutes of delay (6).

Within most pre-hospital systems, TXA is drawn up at the time of need. This can take several minutes and is performed in an already high-stakes high-hazard environment. We hypothesized that predrawing TXA may mean it is given earlier and may mean medication drawing or administration errors are reduced. Making it more easily accessible may also increase its frequency of administration.

As a quality improvement project, our service aimed to reduce the time from injury to administration of TXA in trauma patients with suspected significant haemorrhage by using predrawn TXA.

Predrawn TXA was introduced in April 2018, with TXA being drawn up at the same time as the other daily drugs (1 g/10 mL, in a 10-mL colourless syringe), as shown in Figure 1. 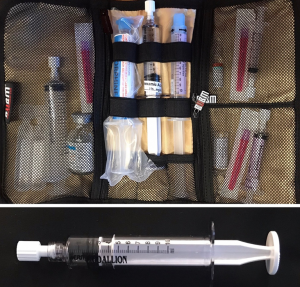 Figure 1 TXA is predrawn in to a white-coloured labelled syringe (lower image) and stored within “drug roll” (upper image) held by the paramedic member of the PHEM team. TXA, tranexamic acid.

Following this introduction, a database (HEMSBase, MedicOne Sytems, UK) search included all patients who had had TXA administered by the PHEM team 6 months prior to and 4 months after the change in practice.

The case records were reviewed and timings of arrival at patient’s side and administration of TXA noted. There were a total of 105 cases in which patients attended were given TXA. Forty cases were excluded as TXA was administered by the ambulance service. Three cases did not have time of administration recorded and were therefore excluded. In 62 cases the PHEM team administered TXA.

An analysis of variance (ANOVA) test was used to determine the statistical difference in means pre-and post-introduction of predrawn TXA.

Following the change in practice the PHEM team members were asked their views using an online survey tool (SurveyMonkey®, London, UK). The active members were emailed a link to the survey which asked if they had used the predrawn TXA, what they liked about it, what they disliked about it and whether they thought we should keep predrawing the TXA as a service improvement.

Characteristics of the two groups are given in Table 1.

TXA was administered according to the institutional standard operating procedure in 100% of cases.

TXA was used more often following the change in practice, based on the suspicion of haemorrhage.

95% of team members of the team were satisfied with the changes introduced.

Where there was a prolonged time (>60 minutes) between arrival at the patient’s side and administration of TXA, it was found that the delay was due to prolonged extrication of the patient from a vehicle.

Following the change all patients who received TXA were documented to have had a suspicion of bleeding, regardless of whether there was evidence of clinical shock present.

Twenty-two team members (55%) responded to the TXA survey. Twenty-one (95%) of team members were satisfied with the change to predrawn TXA and were keen to continue predrawing TXA. One team member preferred to not predraw the TXA, though commented that they had yet to use the predrawn TXA on a mission since the change.

Following the introduction of predrawn TXA, the time to administration of TXA was reduced by an average of 20 minutes. Statistical process control charting demonstrated this was a statistically significant improvement (Figure 2).

Regional suppliers are used and the lowest-priced product available is purchased.

Not all predrawn syringes are used, so some will be discarded. When a dose is used, a further dose of TXA is predrawn in preparation for the next patient.

Predrawn medications have been shown to be faster to administer (7). There are no published reports of predrawn TXA being used in the pre-hospital setting. We recognised there was room for improvement with regard to the time interval between injury to administration of TXA. It is already routine practice to have predrawn anaesthetic drugs, so it was a natural evolution for us to consider extending this to other high-importance drugs. Predrawn prehospital medications have been shown to be microbiologically safe for up to 48 hours (8).

Prior to the change, there was a concern that predrawn TXA might be used too liberally. However, we observed that TXA was administered appropriately in all cases, either with signs of shock, a suspicion of bleeding or both, prior to and following the change of practice.

Following the change in practice, TXA was administered more often, especially if there was a suspicion of bleeding without signs of shock, in accordance with NICE guidance (3). As well as being given more often, it was also given much quicker on arrival on scene, which can improve patient outcomes. The statistical process control chart clearly showed the sustained reduction in time to TXA administration continuing for months after the change in practice had been introduced. Although predrawing TXA results in an additional yearly expenditure of £570 we feel it is an investment worth making given the step increase in quality of patient care provided. We explored the use of syringes pharmaceutically prepared with prefilled, ready-to-inject syringes of TXA but the shelf-life and costs were prohibitive.

In the UK, approximately 5,000 patients per year suffer injuries that lead to major haemorrhage, of which approximately one third die (9). The reduction in median time to administration of 20 minutes is clinically meaningful, translating to an additional survival benefit of more than 10% (4).

A review of TXA use in the UK concluded that “It could be argued that whenever an intravenous cannula is inserted in a potentially severely injured patient, TXA should be given before considering any other fluid” (10). Our experience has shown the immediate availability of TXA facilitates this approach.

As a result of the improvement in speed of administration and the satisfaction of the PHEM team members with the change, the team elected to adopt the predrawing of TXA as routine practice.

Thank you to the generosity of the people who support the Magpas Air Ambulance, whose donations allow the provision of the clinical care and research activities.

Reporting Checklist: The authors have completed the MDAR checklist. Available at http://dx.doi.org/10.21037/jeccm-20-108

Conflicts of Interest: All authors have completed the ICMJE uniform disclosure form (available at http://dx.doi.org/10.21037/jeccm-20-108). The authors have no conflicts of interest to declare.

Ethical Statement: The authors are accountable for all aspects of the work (if applied, including full data access, integrity of the data and the accuracy of the data analysis) in ensuring that questions related to the accuracy or integrity of any part of the work are appropriately investigated and resolved. Institutional approval was given, and the project was deemed service evaluation and the need for formal ethical approval was waived.