A 44-year-old Chinese man presented with thyroid storm and circulatory collapse requiring multiorgan and extracorporeal life support in the intensive care unit. Extracorporeal membrane oxygenation (ECMO) is now a well-established, lifesaving option for patients with acute cardiorespiratory failure as described in the Extracorporeal Life Support Organization Guidelines in 2017 (1). Thus far, there have been several case reports and case series describing the successful use of ECMO in patients with thyrotoxicosis. As early as 2011, a case series (2) described the survival of 3 out of 4 patients in which ECMO was used as a rescue for thyrotoxicosis induced cardiovascular collapse. Another case series published in 2015 (3) described the use of ECMO in 5 patients with thyroid storm, out of which 3 survived. A case series published in 2018 (4) described 14 cases of the use of ECMO for thyrotoxicosis induced cardiomyopathy of which 11 patients survived. 3 other case reports described the successful use of ECMO as a rescue therapy for thyrotoxicosis induced cardiogenic shock and haemodynamic collapse (5-7). One case report described the use of ECMO with plasma exchange (8). We describe the successful use of both VA-ECMO, plasma exchange as a bridge to total thyroidectomy for control of thyrotoxicosis in a patient with thyroid storm complicated by multiorgan failure. To our knowledge, this is the first report combining veno-arterial extracorporeal membrane oxygenation, plasmapheresis, and total thyroidectomy to control life-threatening thyrotoxicosis. We present the following case in accordance with the CARE reporting checklist (available at http://dx.doi.org/10.21037/jeccm-20-147).

The patient subsequently suffered downstream complications of prolonged cardiac arrest, i.e., ischemic hepatitis, acute kidney injury requiring renal replacement therapy, and disseminated intravascular coagulopathy. He was treated with esmolol infusion, hydrocortisone 100 mg 6 hourly and cholestyramine 4mg 8 hourly while targeted temperature management at 36 °C was maintained for 24 hours. As thioamides were precluded by severe hepatic dysfunction, he underwent plasmapheresis with rapid clinical and biochemical stabilization after 3 days (T4: 22 pmol/L; T3: 6.0 pmol/L). ECMO speed was set at 3,385 rpm achieving a flow of 3.7 to 4.2 L/min. Fractional inspired oxygen concentration (FiO2) was set at 100% and the gas sweep speed was maintained at 2 L/min to achieve adequate carbon dioxide clearance and maintain the arterial partial pressure of carbon dioxide of 35 to 40 mmHg. A heparin infusion was used to maintain an activated clotting time of 150 to 200 sec. Haemoglobin levels were maintained between 9.5 to 10.5 g/dL without any need for transfusion. Marked improvement in left ventricular ejection fraction from 20% to 35% facilitated a short 3-day VA ECMO run. On the 3rd day on VA ECMO, a trial of weaning to facilitate was done to facilitate surgical thyroidectomy. ECMO flow was successfully weaned with Noradrenaline support; the cannulas were explanted, and the heparin infusion stopped. Thyroidectomy was performed the following day (Figure 1).The coagulation profile was sent off on the morning preceding surgery and blood products prepared based on the laboratory coagulation tests. His activated partial thromboplastin time (aPTT) was 52.0 sec more than 6 hours after stopping heparin, prothrombin time was 22.5 sec, international normalised ratio (INR) 2.4, platelet levels were 57×109/L and fibrinogen was 0.53 g/L. Thus, 1 litre of fresh frozen plasma, 2 units of cell separated platelets, 10 units of cryoprecipitate were transfused prior to incision. In the operating theatre, a rotational thromboelastometry was performed which showed an EXTEM A10 of 33 mm, and FIBTEM A10 of 6 mm, thus another 10 units of cryoprecipitate was given intra-operatively. Adequate surgical haemostasis was confirmed with a Valsalva manoeuvre prior to closure. Post procedure, the INR remained below 1.5, aPTT remained less than 1.5 times the upper limit normal, fibrinogen remained above 1 g/L and platelets remained above 50×109/L without any further transfusion. Postoperatively, sinus rhythm was restored, and levothyroxine started as T3 level had fallen below normal. However, the patient remained comatose. Equivocal clinical findings (preserved pupillary/corneal reflexes but absent motor response) rendered neuroprognostication challenging and ancillary testing necessary. The presence of thyroid eye disease with resultant divergent gaze also confounded our findings (Figure 2). Brain magnetic resonance imaging revealed preserved grey-white differentiation, and electroencephalogram was consistent with severe diffuse encephalopathy (maximum bi-frontal bursts, generalized suppression). Due to insufficient predictive evidence of a poor neurological outcome, tracheostomy was planned for the patient in the interim. The derangements from presumptive metabolic encephalopathy (ammonia: 228 µmol/L; urea: 10.4 mmol/L)were managed with lactulose and RRT while awaiting neurological improvement. On the day that he was due for tracheostomy, the patient regained full consciousness (Glasgow Coma Scale 15) and was promptly liberated from mechanical ventilation. All procedures performed in studies involving human participants were in accordance with the ethical standards of the institutional and/or national research committee(s) and with the Helsinki Declaration (as revised in 2013). Written informed consent was obtained from the patient. 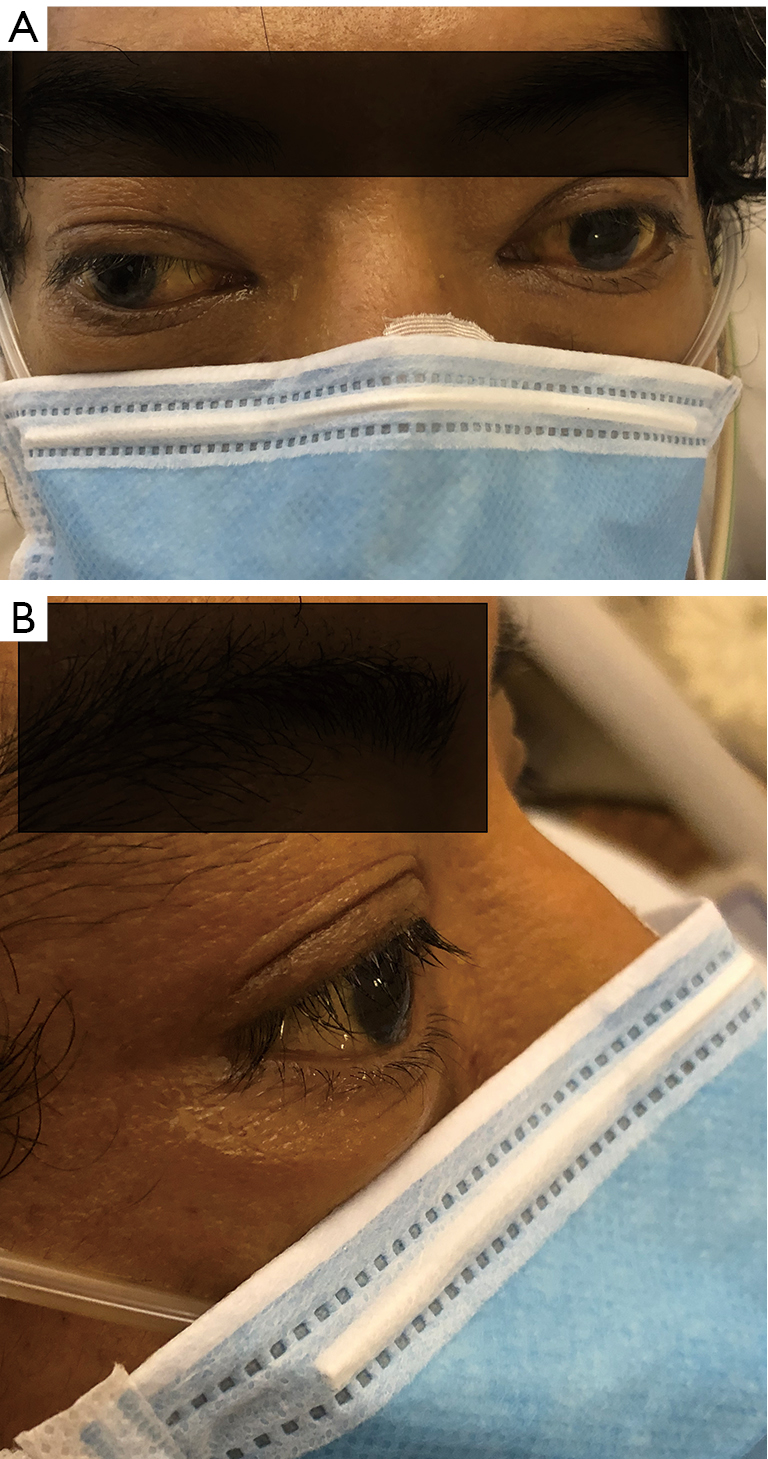 The patient was grateful for the care he received and felt fortunate to be alive. However, he feels tired easily, requiring assistance with and unable to do many of the activities he could do for himself prior to his illness.

Thyroid storm is a rare, life-threatening condition associated with multi-organ dysfunction and high mortality rate. It may be precipitated by an acute event such as trauma, surgery, infection, or non-compliance to medication. A multimodal approach is recommended which involves blockage of thyroid hormone production, symptom control and organ support in an intensive care unit (ICU) (9). There is insufficient evidence for the routine use of plasma exchange as first line therapy for management of thyroid storm. However, in cases where anti-thyroid medications are contraindicated or where first line treatment have failed it has been successfully used (10,11). It has also been used to achieve rapid symptomatic control of thyrotoxicosis prior to definitive surgical treatment (12). A significant proportion of patients with thyroid storm have cardiovascular symptoms even leading to cardiovascular collapse. Extracorporeal membrane oxygenation (ECMO) is now a well-established, lifesaving option for patients with acute cardiorespiratory failure (1).

As thyroid cardiomyopathy is potentially reversible, VA ECMO could rescue circulatory collapse and bridge the patient to improvement or recovery of cardiac function while other treatments are ongoing. The successful use of ECMO in patients with thyrotoxic cardiomyopathy, and the feasibility of performing plasmapheresis on ECMO have been reported (4,6,7,13,14). However, to our knowledge, this is the first reported case of combining the use of both VA-ECMO, and plasma exchange as a bridge to urgent thyroidectomy in an extreme case of thyroid storm.

VA ECMO and plasmapheresis are temporizing measures to bridge to definitive thyroidectomy in thyroid storm management. This case illustrates the importance of expediency in instituting the stepwise treatment modalities in a time-sensitive manner that led to a favourable outcome.

The case has been presented in part as a poster at the CHEST World Congress, Thailand in 2019. All authors played an active role in management of the patient in the intensive care unit.

Reporting Checklist: The authors have completed the CARE reporting checklist. Available at http://dx.doi.org/10.21037/jeccm-20-147

Conflicts of Interest: All authors have completed the ICMJE uniform disclosure form (available at http://dx.doi.org/10.21037/jeccm-20-147). The authors have no conflicts of interest to declare.

Ethical Statement: The authors are accountable for all aspects of the work in ensuring that questions related to the accuracy or integrity of any part of the work are appropriately investigated and resolved. All procedures performed in studies involving human participants were in accordance with the ethical standards of the institutional and/or national research committee(s) and with the Helsinki Declaration (as revised in 2013). Written informed consent was obtained from the patient.