Infectious diseases are most commonly found in the intensive care units (ICUs). Drug-resistant bacterial infections are the most challenging of these (1). With the widespread use of broad-spectrum antibiotics, the antibiotic susceptibilities and resistance patterns of infectious diseases might be changed accordingly (2). Optimal antibiotic use is crucial in septic patients (3). Unfortunately, 30% to 60% of the antibiotics used in the ICU were suboptimal, inappropriate and unnecessary (4-7). Continued monitoring of local epidemiological data is crucial to reflect current trends and appropriately guide disease management. The CHINET surveillance system has done lots of meaningful work to collect and report the changes and trends in antimicrobial resistance across China (8,9). However, data about the species distributions and antibiotic resistance of infections in local ICUs in East China are limited (10). Therefore, we aimed to establish a database of the species distributions and antibiotic resistance of infectious diseases in our local ICUs. We present this article in accordance with the STROBE reporting checklist (available at http://dx.doi.org/10.21037/jeccm-20-121) (11).

Clinical isolates from 34 ICUs participating in the Shandong Provincial antimicrobial resistance surveillance network were collected during 2010–2016. All of the pathogens isolated were included in this study. The study was conducted in accordance with the Declaration of Helsinki (as revised in 2013). The study was approved by the institutional review boards of Qianfoshan Hospital, Shandong University (ethics approval number: 2009-S068). The institutional review board specifically approved the informed consent waiver because of the anonymous and purely observational nature of this study.

The susceptibilities were determined by the disk diffusion method in accordance with the Clinical and Laboratory Standards Institute guidelines (12,13).

Data collected from 34 ICUs were recorded by WHONET 5.6 software (14,15) (http://www.whonet.org). A database was established in WHONET 5.6 for samples from the same hospital with all of the antibiotics used in the antimicrobial susceptibility test selected from the list of antibiotics. Patient information, the sample category, and the pathogen index according to the rule of WHONET were stored while documenting the pathogen information. Double entry and validation were performed. Any missing data were retrieved from the hospital medical system. At each participating hospital, databases were updated quarterly, and data from all 34 hospitals were compiled annually.

ICUs participating in the Shandong Provincial antimicrobial resistance surveillance network held an annual meeting. The ICU department of Qianfoshan Hospital collected the WHONET databases from the 34 hospitals, which were shared and discussed during the annual meeting. Figure S1 shows the location of the 34 ICUs in Shandong Province.

The most common isolations in different specimens were reported in Table 1. The isolation distributions in each kind of specimen were significantly different (P<0.001). 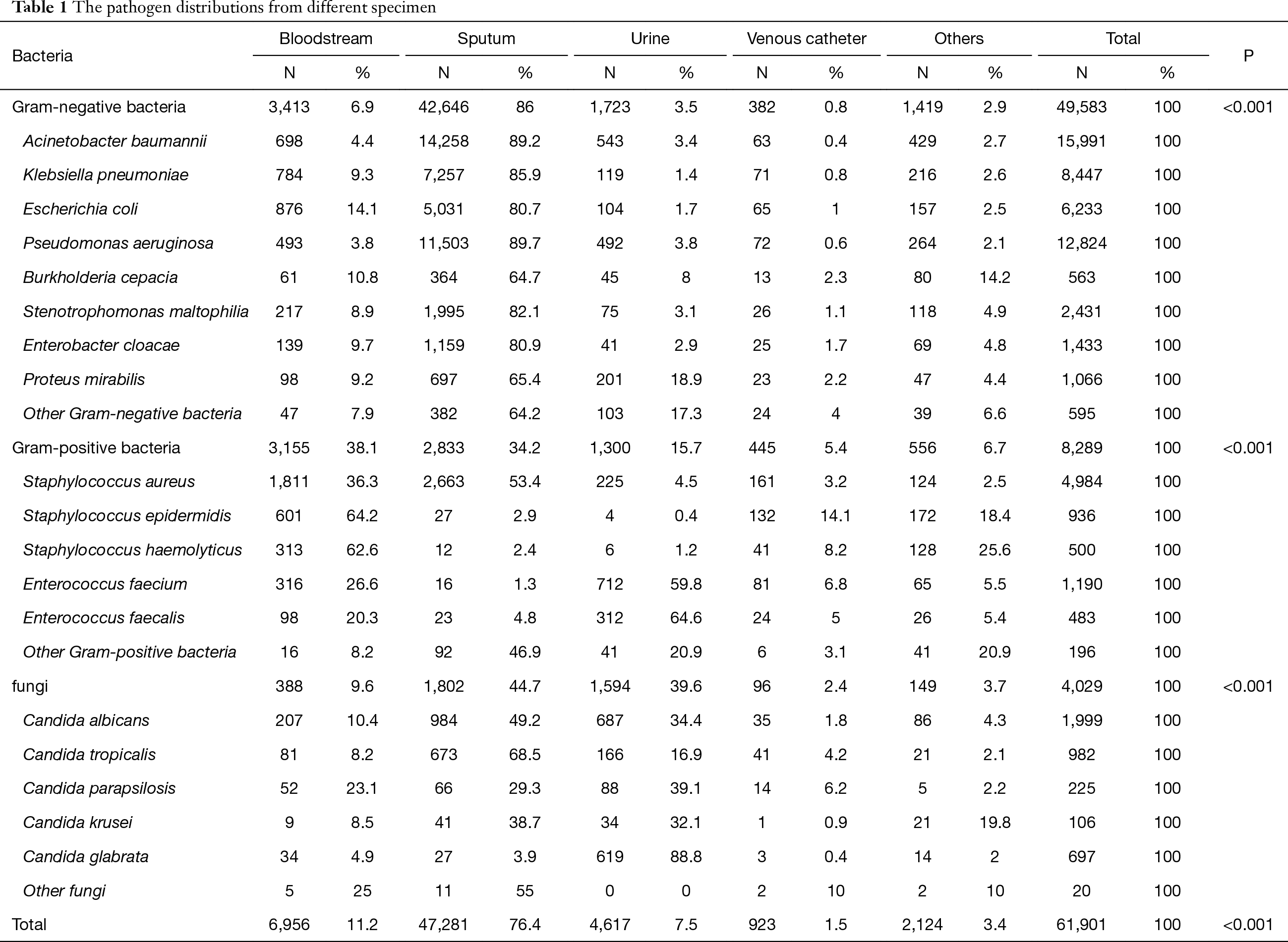 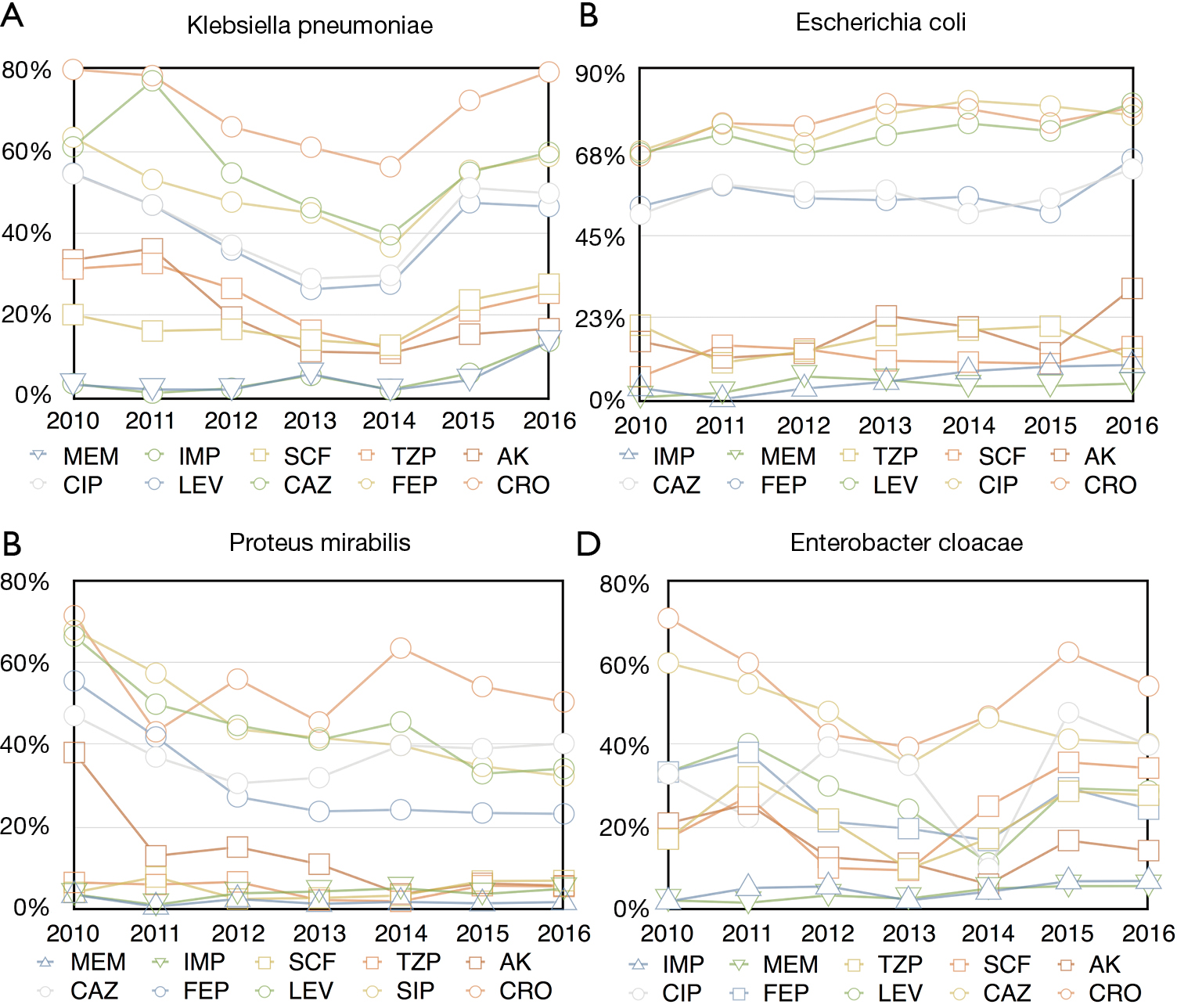 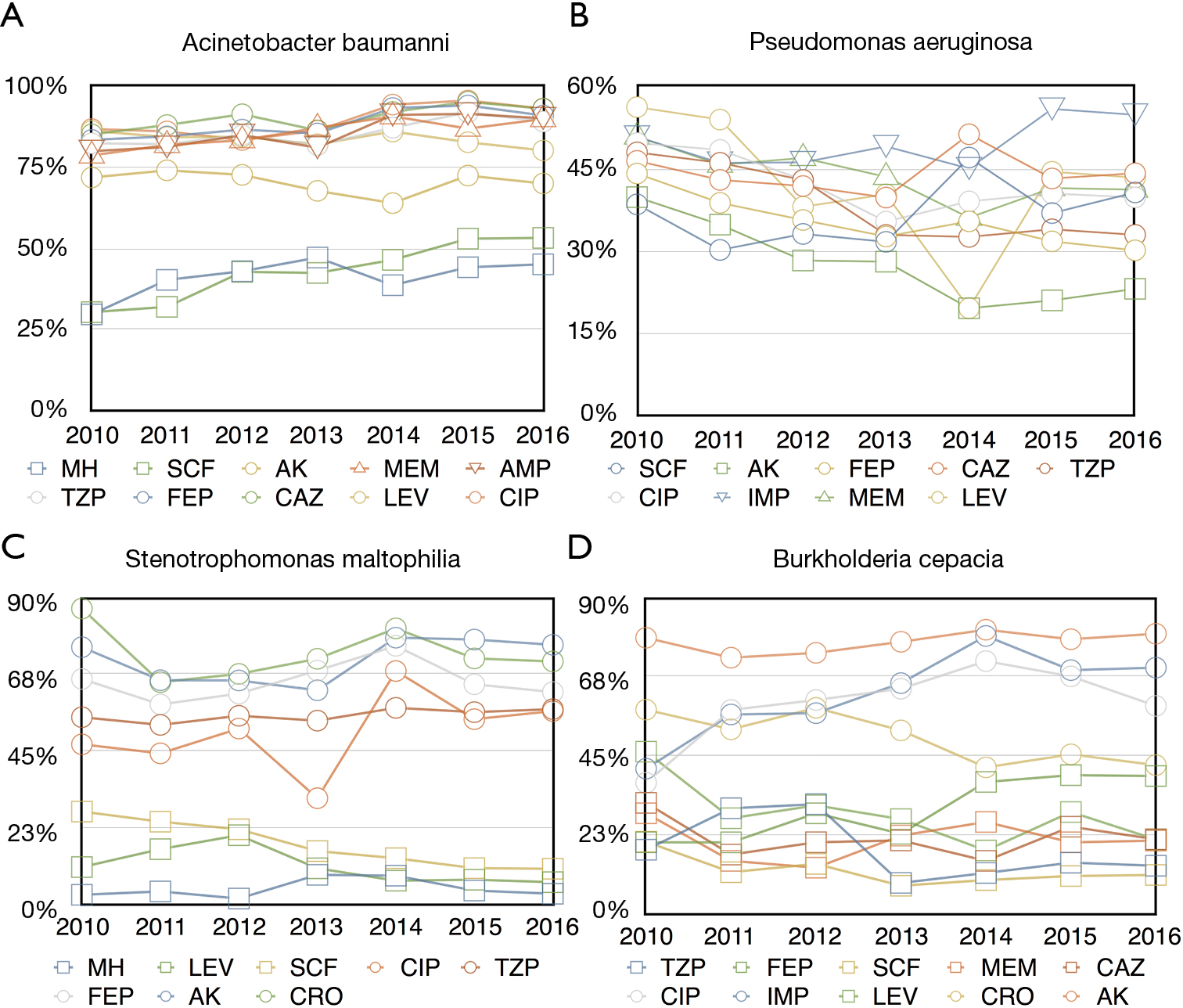 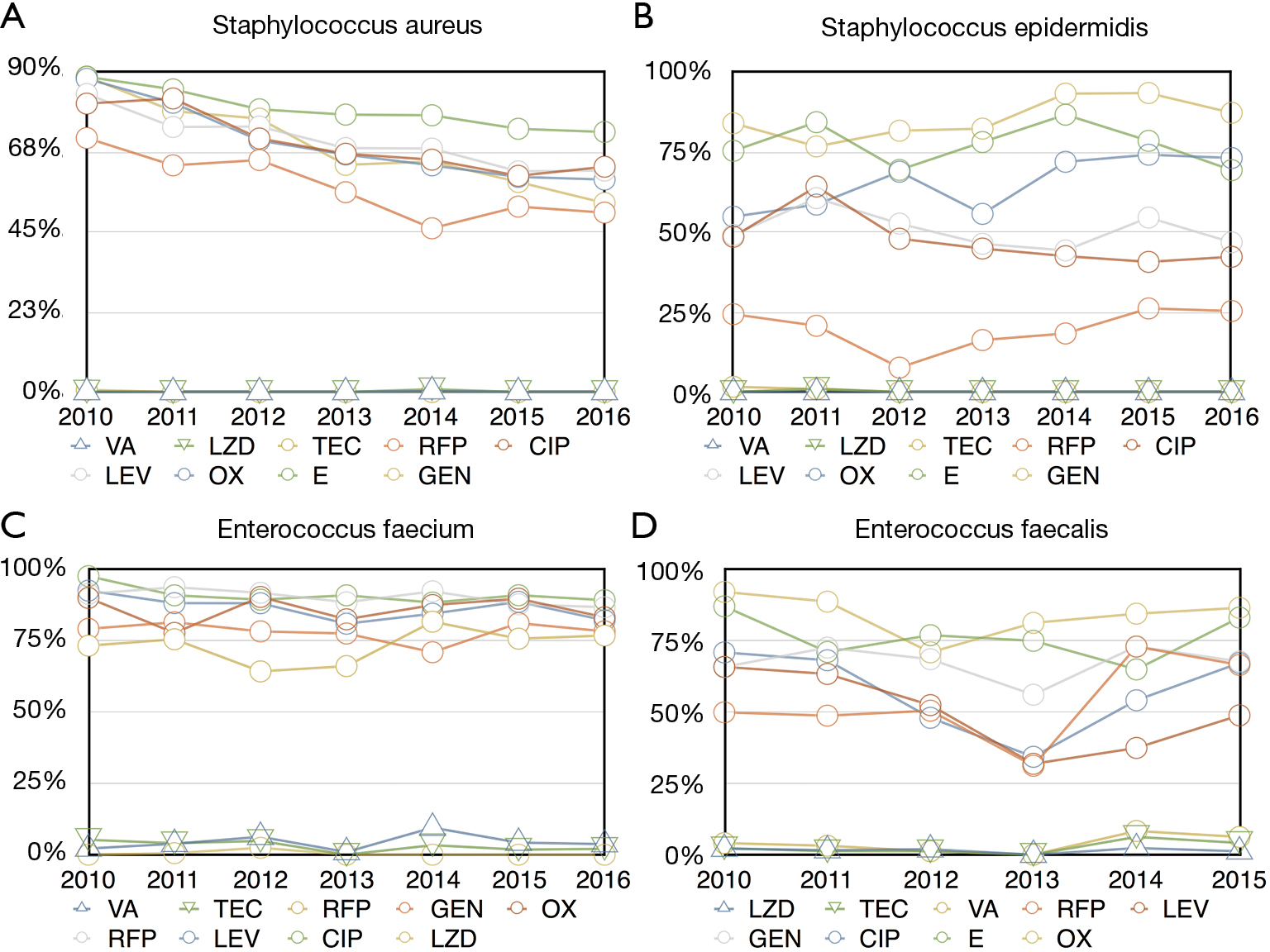 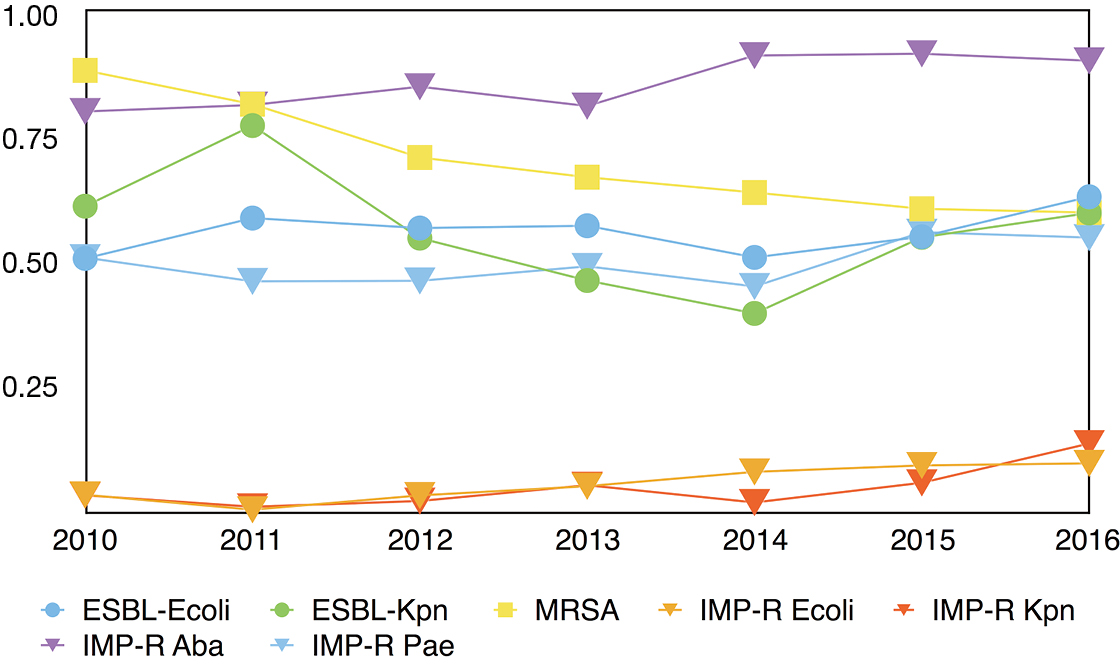 Our research indicated that non-fermentative bacteria are the most commonly isolated pathogens in our ICUs, representing more than 60% of the overall isolates, in comparison with 33% in ICUs in Taiwan (16). The high proportion of non-fermentative bacteria isolated might be related to the following causes. First, we conducted frequent routine bacterial cultures. The isolated non-fermentative bacteria were, to some extent, colonization rather than pathogenic bacteria, which might limit the meaning of their prevalence. Also, it should be noted that frequent cultures from the same patients might lead to the same isolates being included in the data collection over and over again. Second, we might have a suboptimal level of infection control. Since non-fermentative bacteria widely exist in the environment, suboptimal hand hygiene might result in the transmission of this type of bacteria (17,18). Our results prompted us to improve the hand hygiene and project-related infection control schemes in our ICUs.

From these data, the overall level of resistance to Carbapenems was on the rise. Notably, the resistance of Acinetobacter baumannii increased tremendously and rapidly. We noticed that the carbapenems resistance Klebsiella pneumoniae decreased in the first several years and then gradually increased in recent years. We compared our results with the CHINET surveillance (www.chinets.com). The fluctuations of the carbapenems resistant Klebsiella pneumonia rates through the seven years were similar with our results in Beijing. However, the specific rates differed tremendously from regions across China. Carbapenem resistance is a tough problem worldwide (19-21). There is a lack of potent and effective antimicrobials to Carbapenem-resistant Gram-negative bacterial infections since such strains are usually extensively drug resistant (22). As novel potent antibiotics could not be counted on, the prevention of clonal dissemination and the avoidance of Carbapenem overuse are vital to preventing the spread of these bacteria (23). Surveillance of bacteria distribution and drug resistance is also important (24).

There are strengths in our study. We conducted a continued, long-period surveillance in our local ICUs and included almost all of the major cities in Shandong Province. The data should be more related to our local clinical conditions in comparison with the surveillances of various medical departments and areas across China. To sum up, we shared the data and held a meeting annually between all member ICUs. Therefore, we kept adequate communication and made efforts to reduce the variations in bacterial cultures, data processing and also infection controls. There are several limitations to our study. First and foremost, this study did not make a distinction between pathogenic and colonized bacteria. For the vast majority of candida in sputum, the isolates had no much clinical meaning. Besides, we did not further classify the sources of specific sputum. We reported the isolates; yet, the relations between the isolates and infections were not analyzed in this study. Moreover, the clinical severity data of these bacteria were not recorded; thus the associations between bacteria and clinical severity were uncertain. Second, there was no controlled design in this study, so the relations between the variations of bacterial resistance and clinical outcomes were unclear. And without clinical interventions recorded, we could not analyze the associations of resistance changes and clinical practice. Third, the data were recorded according to the reports from the microbiology laboratories and no further genetic testing were conducted. The further identification of resistant strains was therefore limited. Fourth, we described the distribution and resistance patterns of pathogens in ICUs in our region. However, resistance patterns vary in different regions. The meaning for other regions is limited.

Funding: The research was supported by Shandong Provincial Natural Science Foundation (ZR2015CL012), and grants from the Medical Science and Technology Development Program of Shandong Province (2017WS363 and 2017WS761).

Reporting Checklist: The authors have completed the STROBE reporting checklist. Available at http://dx.doi.org/10.21037/jeccm-20-121

Conflicts of Interest: All authors have completed the ICMJE uniform disclosure form (available at http://dx.doi.org/10.21037/jeccm-20-121). The authors have no conflicts of interest to declare.

Ethical Statement: The authors are accountable for all aspects of the work in ensuring that questions related to the accuracy or integrity of any part of the work are appropriately investigated and resolved. The study was conducted in accordance with the Declaration of Helsinki (as revised in 2013). The study was approved by the institutional review boards of Qianfoshan Hospital, Shandong University (ethics approval number: 2009-S068). The institutional review board specifically approved the informed consent waiver because of the anonymous and purely observational nature of this study.