Acute pulmonary embolism (PE) is a potentially life-threatening condition that carries a high risk of morbidity and mortality (1). A recent observational study in Canada has estimated the 30-day and 1-year mortality rates from this disease to be 3.9% and 12.9% respectively (2). A systematic review of the global disease burden of thrombosis has also found venous thromboembolism, a closely-linked precursor to PE, to be one of the leading sources of disability-adjusted life years lost globally (1).

While early diagnosis and management have been shown to improve survival rates, diagnosis of the disease is notoriously difficult, particularly in the emergency department (ED) (3). The early signs and symptoms of PE are nonspecific and often overlap with those of other cardiopulmonary conditions (2). Clinical screening modalities such as the Well’s Score have also been shown to be limited in sensitivity (4). In addition, research has found differences in PE risk and mortality amongst different ethnic groups, raising concerns that current risk assessment tools, which were developed from studies done in mainly Caucasian populations, may affect risk stratification and treatment efficacy in non-Caucasian populations (5-7).

Despite its relatively low incidence in Asia, representative literature about PE among its population remains important for improving survival rates from the disease (5,6). A paper published in 2017 evaluated the clinical characteristics, risk factors and clinical outcomes of hospitalised patients diagnosed with acute PE in Singapore (8). Another local paper proposed a new model of risk stratification in comparison to other clinical prediction tools such as Pulmonary Embolism Severity Index (PESI) (9).

The aim of our study was to (I) describe the profile of patients diagnosed with acute PE in the ED of a tertiary hospital and (II) examine patient and management factors associated with 30-day mortality among these patients.

We present the following article in accordance with the STROBE reporting checklist (available at http://dx.doi.org/10.21037/jeccm-20-96).

This was a retrospective observational study of patients conducted at the ED of Changi General Hospital, a tertiary healthcare institution in Singapore. Patients 21 years of age and older who presented to the ED between 1st January 2016 and 31st December 2017 with an ED diagnosis of acute PE were included in the study. Patients with known diagnosis of PE on active treatment and patients who arrived at the ED in a state of cardiopulmonary arrest with no subsequent return of spontaneous circulation were excluded from the study. The study was conducted in accordance with the Declaration of Helsinki (as revised in 2013). The study was approved by institutional ethics review committee (CIRB 2018/2260) and individual consent for this retrospective analysis was waived.

The electronic medical records were reviewed and relevant information pertaining to demographics, clinical presentation, investigations, management, disposition and outcomes were extracted. The extracted clinical and management factors were summarized in Table 1. 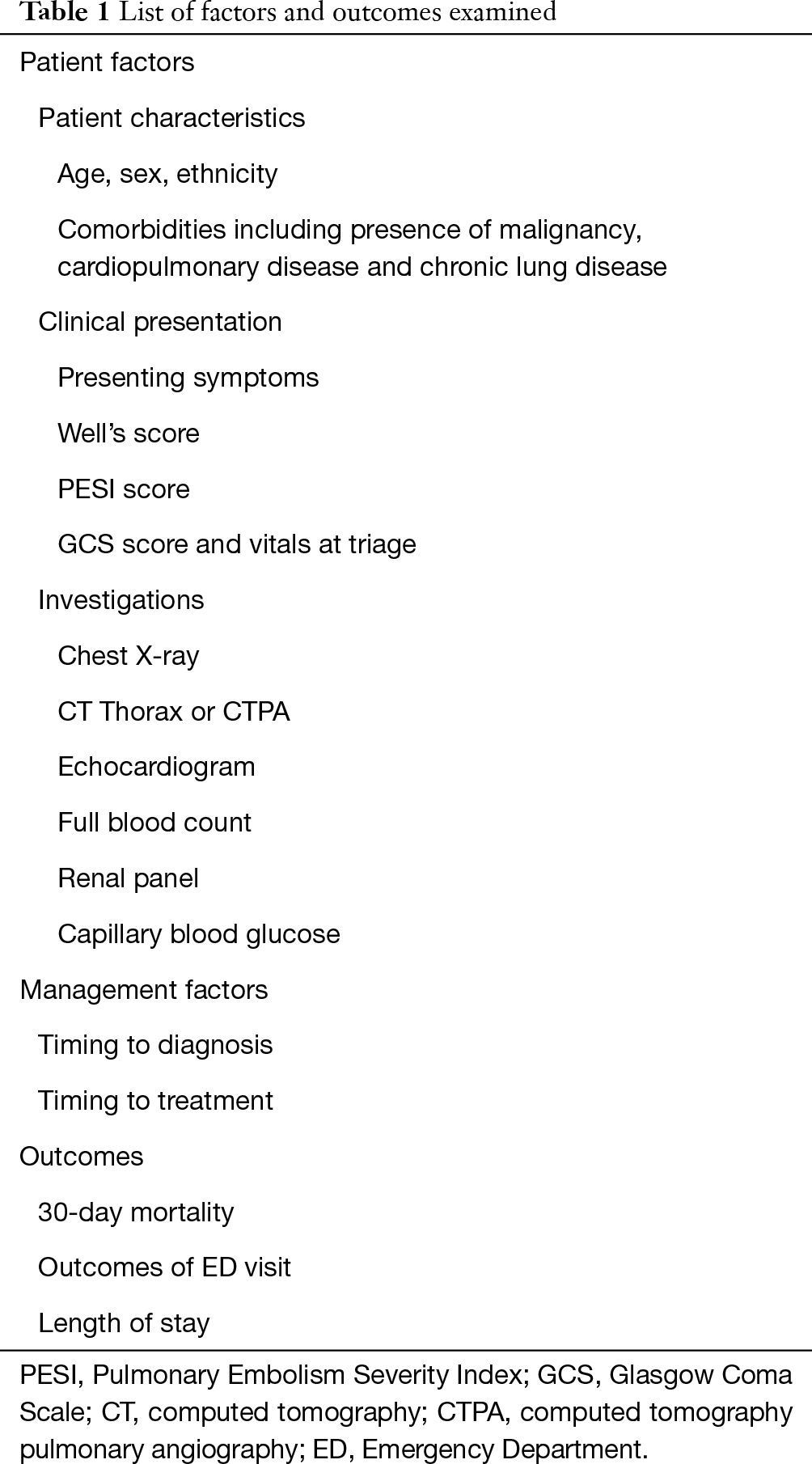 The list of variables was obtained based on literature review and included variables required in computation of PESI (8,10). The presence or absence of a recording of Well’s score in the medical records was looked for and PESI was computed retrospectively for all patients.

The primary outcome of interest was 30-day mortality, defined as event of demise either in the ED or during inpatient stay within 30 days of ED presentation. Other variables collected were outcome of the ED visit and length of inpatient stay. Outcome of ED visit was categorized into: demise in ED, admission to Intensive Care Unit (ICU), admission to High Dependency (HD) unit, admission to general ward (GW), transfer to other hospitals and discharge against medical advice.

The data was subsequently analysed using SPSS Statistics Version 26 to correlate patient and management factors with 30-day mortality. Bivariate analysis was performed with subsequent logistic regression to determine odds ratio for all suitable variables. For categorical variables with null or complete events, comparison was done via Pearson’s chi-square instead. Statistical significance was determined by P value less than 0.05.

The study included a total of 70 patients (as illustrated in Figure 1) with a mean age of 61.8 (SD 16) years. Fifty-seven percent of the study population was male, 44% was of Chinese ethnicity and 77% had at least one comorbidity (Table 2). None of these patient demographics correlated significantly to 30-day mortality (Table 3).

Most patients presented with at least 1–2 symptoms (71%) related to PE and/or deep vein thrombosis, with the commonest presenting symptom being dyspnoea (76%) as seen in Table 2. Out of the 14 patients presenting with loss of consciousness, 10 of them required HD or ICU care. There were only two patients (3%) who presented with hemoptysis but both had poor outcomes. They were both admitted to HD and one later demised during inpatient stay. The total number of presenting symptoms did not correlate significantly with 30-day mortality (P=0.554).

In terms of objective parameters taken at triage, the patients were mildly tachycardic (median heart rate 103 beats per minute, IQR 83–122) and tachypneic (median respiratory rate 21 breaths per minute, IQR 19–26). The median oxygen saturation reading without oxygen supplementation was 93% (IQR, 88–98%). Temperature and blood pressure readings were within normal ranges (Table 2). Majority of the patients (90%) had a GCS score of 15 at presentation. Higher respiratory rates and lower oxygen saturation levels were both significantly associated with 30-day mortality (P=0.043, P=0.027 respectively) while GCS score and blood pressure measurements at presentation did not demonstrate any correlation with 30-day mortality (Table 3).

Sixty-four patients (91%) received CT imaging which were all diagnostic of PE. Six patients (8%) had CT thorax without contrast while 58 patients (83%) had CTPA (Table 2). Chest X-rays were performed for 60 patients (86%) of which 27 (39%) showed abnormalities (such as lung opacities and pleural effusions). The presence of abnormal chest X-ray findings (found in 86% of those who demised versus 60% in survivors) were significantly associated with 30-day mortality (P=0.047, Table 3). 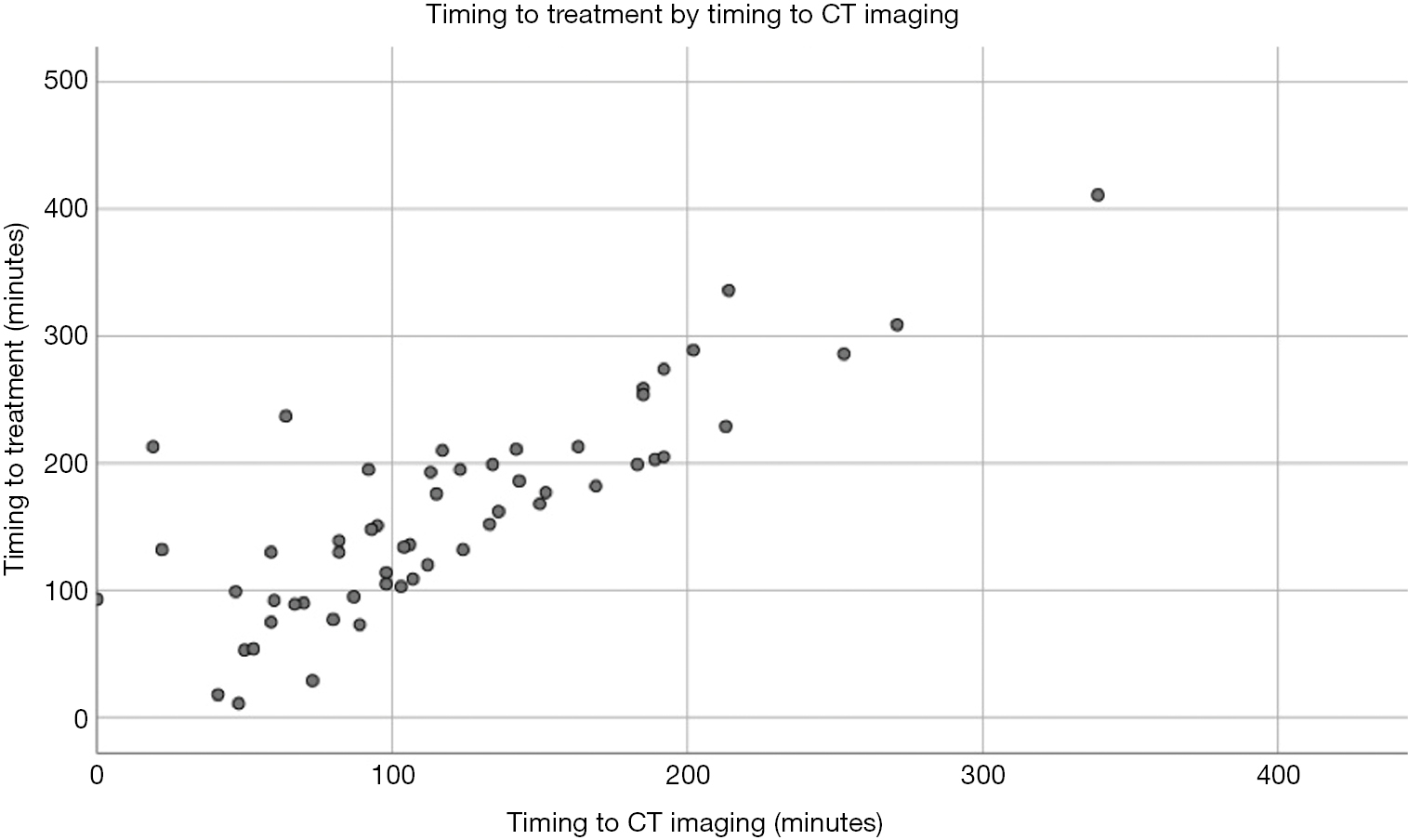 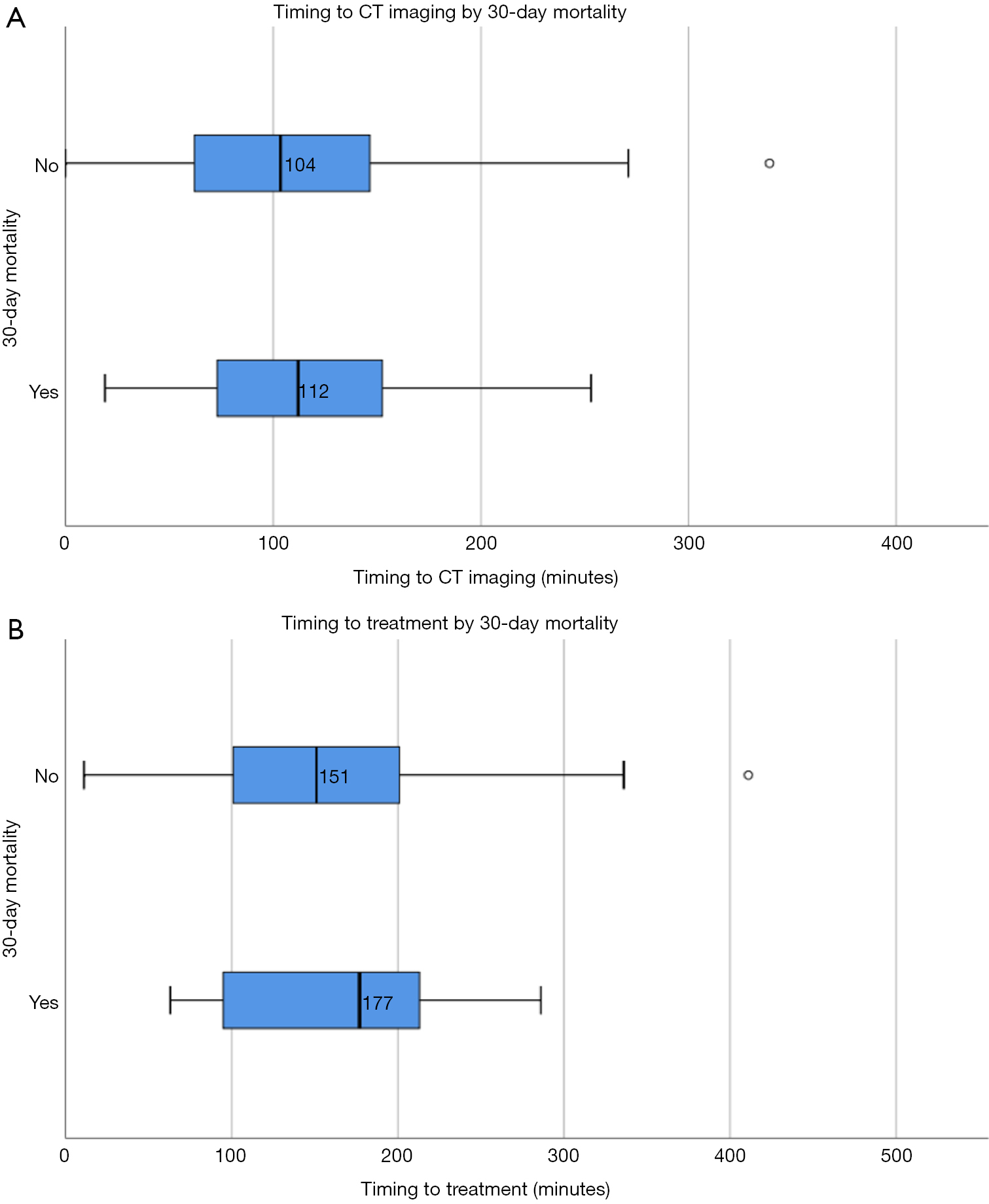 Looking at the various markers that make up PESI and simplified PESI score, only two variables—raised respiratory rate and low oxygen saturation levels—correlated significantly with 30-day mortality in our study. The other variables—history of cancer, history of heart failure, history of chronic lung disease, tachycardia, altered mental state, hypotension and hypothermia—had no significant correlation with 30-day mortality. Nevertheless, it is important to note that although GCS score was not found have significant correlation to 30-day mortality, all patients with a GCS less than 15 did not survive beyond 30 days.

On the other hand, there were other variables not part of the PESI or simplified PESI score (e.g., raised troponin levels) which correlated significantly with 30-day mortality in our study—some of which were also found to be consistent with findings in other studies. As a marker of right ventricular dysfunction, the utility of raised troponin levels as a prognosis indicator in PE has been proven to be meaningful in both mortality and disposition outcomes (15-17). It may also be a good discriminator for outcomes in normotensive PE (18). In our study, low serum bicarbonate levels and high anion gap were significantly associated with 30-day mortality. This correlation between low bicarbonate levels and high anion gap with poorer outcomes may be attributed to the presence of lactate acidosis—one of the independent prognostic markers proposed by the SHiELD model for normotensive PE (19).

Thus, the construction of another tool to further distinguish prognosis in PE especially for the low to moderate risk groups, would be beneficial to instituting earlier treatment strategies. Our study findings may help to guide further research in developing this tool. For example, of all the various markers that make up PESI and simplified PESI score, raised respiratory rate and low oxygen saturations were the only ones found to have significant correlation to 30-day mortality, as such, they may be more meaningful to distinguish poorer outcomes. Hence, using the novel respiratory index (oxygen saturation in air to respiratory rate ratio) as part of a prognostic tool for PE severity and mortality may be prove to be more relevant (20).

In our study, early PE diagnosis is significantly associated with earlier delivery of treatment. Our overall population had earlier diagnosis (104 minutes) and therapeutics given at ED (152 minutes) compared to other published literature. Other studies reported median timing to diagnosis of 288 minutes (21) and timing to therapeutics of 756 to 978 minutes (22). Another study defined prompt timing to diagnosis as less than 2 hours (23). Forty-six (66%) patients in our study population were diagnosed within two hours.

Our study also suggests that shorter time to diagnosis and definitive therapeutics may improve mortality. While there are no statistically significant correlations, we note that the subset of our study population that survived had a shorter time to diagnosis and definitive therapeutics. This supports current research findings which suggest that initial right ventricular dysfunction may be reversible with thrombolytics (24-26). Our study encourages future prospective research to establish causative relationships and better understanding of contrast-related or bleeding complications possibly associated with earlier CT imaging and therapeutics. These serve to improve guidelines and standardize recommended timeframe to deliver therapeutics which currently varies from 11 to 411 minutes (27).

There are several limitations to our study. In view of the small study population and retrospective nature of our study, a causative relationship between the treatment factors and outcome could not be definitively determined. Being a retrospective study, our results are also limited by recall bias and accuracy of available records. In addition, the exclusion of patients with cardiopulmonary arrest may have resulted in under-representation of high-risk PE in our study population. This study ultimately serves best as a preliminary analysis to support direction of future prospective research with larger populations.

The study identified several factors that are significantly associated with 30-day mortality in patients presenting with acute PE to the ED. These factors are somewhat consistent with prognostic factors present in validated tools. Further research into various distinctive features of acute PE in the low to moderate risk population is required to improve future management strategies for these patients.

Reporting Checklist: The authors have completed the STROBE reporting checklist. Available at http://dx.doi.org/10.21037/jeccm-20-96

Conflicts of Interest: All authors have completed the ICMJE uniform disclosure form (available at http://dx.doi.org/10.21037/jeccm-20-96). The authors have no conflicts of interest to declare.

Ethical Statement: The authors are accountable for all aspects of the work in ensuring that questions related to the accuracy or integrity of any part of the work are appropriately investigated and resolved. The study was conducted in accordance with the Declaration of Helsinki (as revised in 2013). The study was approved by institutional ethics review committee (CIRB 2018/2260) and individual consent for this retrospective analysis was waived.