What accounts for the delay in antibiotic administration in children with suspected sepsis in the emergency department?—a case control study

Delay in antibiotic administration is known to increase mortality in patients with sepsis and this has been described for the delay until shock occurs in a prospective study and in hypotensive septic shock retrospectively (1,2). What constitutes this delay is unknown. Our objective was to analyse the determinants in delay of antibiotic administration in children at risk of sepsis. We present the following article in accordance with the STROBE reporting checklist (available at http://dx.doi.org/10.21037/jeccm-20-74).

This was a retrospective case record review over a 6-month period of case records of children. A case control design was applied comparing data on children who received antibiotics within 1 hour of admission and those where there was a delay beyond 1 hour. Ethical approval or consent was not required for this service audit project. The study was conducted in accordance with the Declaration of Helsinki (as revised in 2013).

The setting was a dedicated paediatric emergency department and paediatric assessment unit of a municipal district general hospital in the United Kingdom. A sepsis pathway designed according to guideline 51 of the National Institute of Health and Care Excellence of the United Kingdom (3) alerting all staff to features and required rapid management of sepsis is in place. All staff is aware of this pathway which is taught and adherence audited regularly. Electronic patient records were analysed for all consecutive children up to 16 years of age seen over a 6 months period between beginning of July and end of December 2017 fulfilling the inclusion criteria (see below). The time intervals relating to diagnosis and decisions between admission and antibiotic administration were analysed and related to patient characteristics.

Inclusion criteria: Included were all children with suspected sepsis on admission as defined according to an agreed pathway as fever above 38 or looking sick or parent/carer very worried or has the paediatric early warning system (4) triggered and where data were complete in documentation of time of admission, time of triage, time seen by doctor, time of diagnosis with decision to treat, time of prescription of antibiotic and time of administration of antibiotic.

All children where the clinician did not suspect sepsis or there was no documentation of any of the time points mentioned in the inclusion criteria.

All data were extracted from electronic patient records retrospectively and transferred onto an Excel spread sheet (Microsoft word) and from there data were for statistical analysis after anonymization imported into SPSS version 20 (IBM) for analysis.

Compared were data on children who received antibiotics within 1 hour of admission and those where there was a delay beyond 1 hour. The 1-hour cut-off was chosen because previous research (1) revealed that each hour delay of antibiotic administration in septic shock was associated with an increase in mortality. The time interval between seen by doctor and time of prescription by the doctor was taken as doctor led management and the other time intervals: time between admission and seen by doctor and between time of prescription to time of administration by nurse as nurse led management and the proportion of the total delay attributable to medical and nursing time compared between groups.

For analysis of differences between components of the delay in antibiotic administration the Kruskal-Wallis test for multiple comparison was used. For comparison of patients with a delay of antibiotic administration of more than an hour and less than an hour and C-reactive protein levels the Mann-Whitney U test was used for comparison of age, duration of antibiotic treatment and PEWS score and the t-test for body temperatures heart rate, lactate levels. Chi-square or Fishers exact test were used as appropriate for sex, seniority of involved doctors, percentage of delay due to involvement of medical versus nursing staff, organisms isolated and final diagnosis. A two tailed P value of <0.05 was taken as indicating a statistically significant difference. 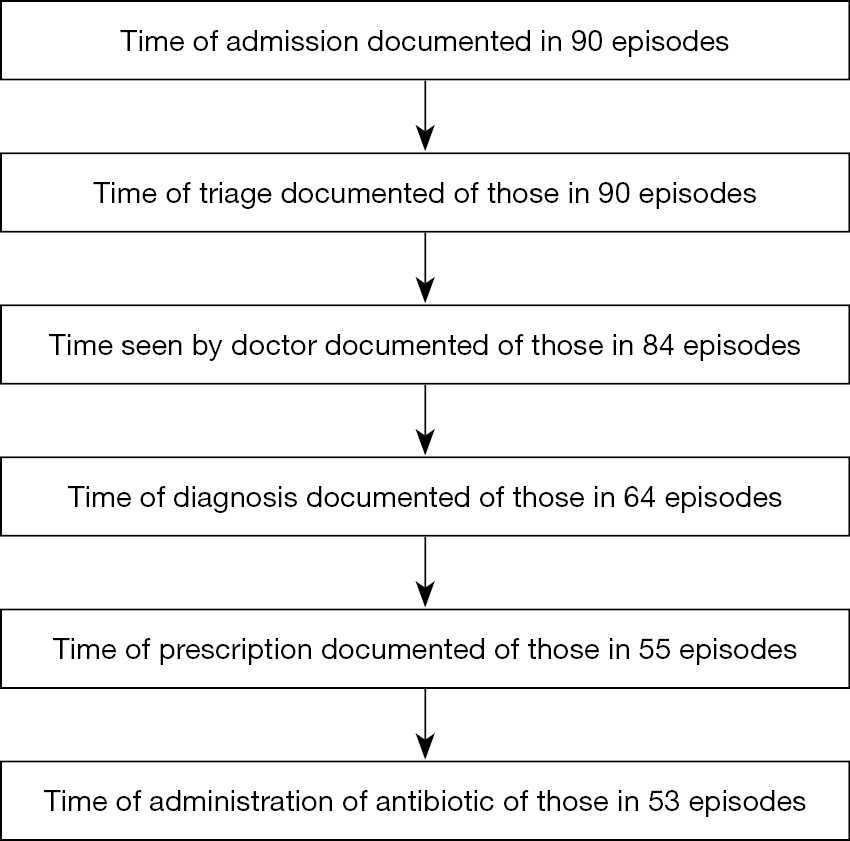 Figure 1 Flow chart of drop outs due to incomplete data.

According to guideline 51 of the National Institute of Health and Care Excellence of the United Kingdom (3) 32 episodes were at high risk of sepsis, 4 at moderate and 17 at low risk. There was no difference in delay of antibiotic administration between groups of differing risk: for patients with high risk it had a median (range) of 173 min (range, 26–488 min), with moderate risk 236 min (range, 32–293 min) and low risk of 163 min (range, 27–481 min) (Kruska-Wallis test P=0.624). The components of the delay in antibiotic administration are shown in Table 1. The comparison of personal characteristics of patients and management comparing patients with a delay less than to greater than an hour is shown in Table 2. None of the patients included had oxygen saturations of less than 94% on admission. All but three patients (who received benzylpenicillin, piperacillin or vancomycin) received intravenous ceftriaxone or cefotaxime. All patients survived the illness episode and without known long term sequelae. 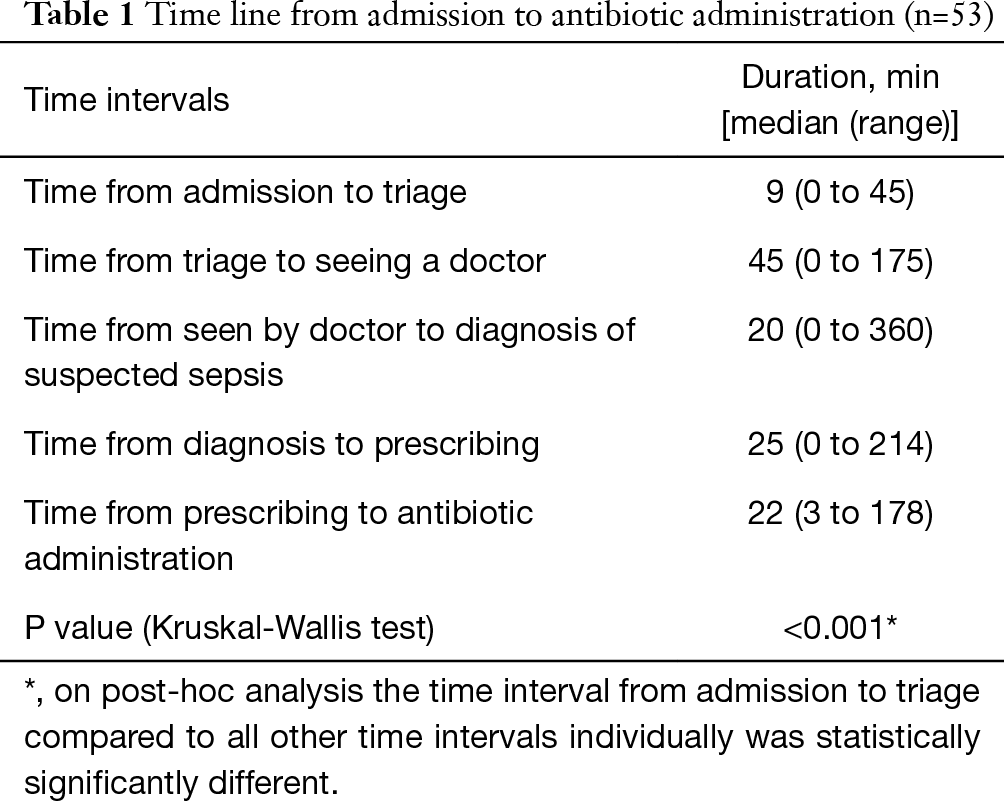 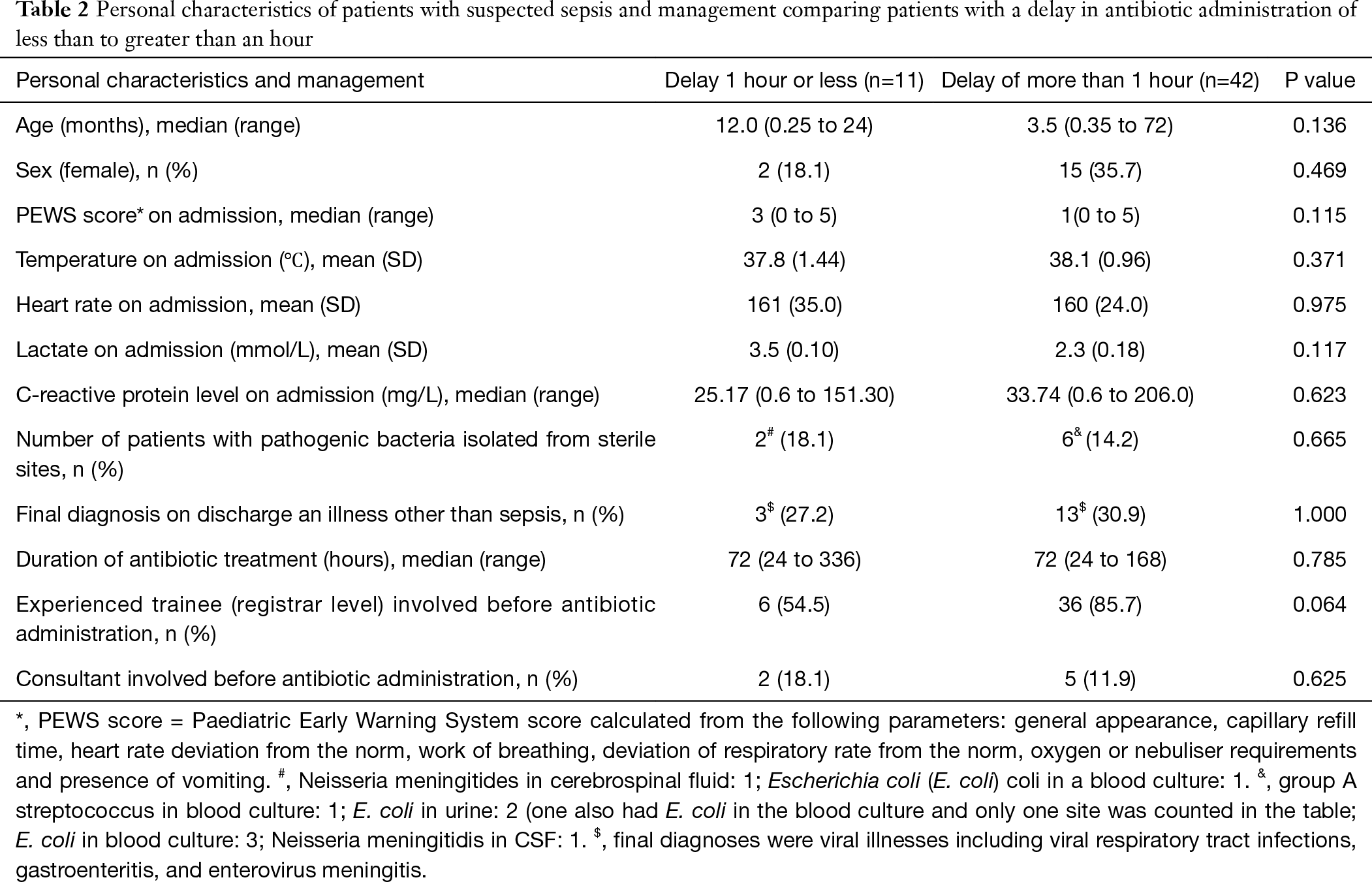 This is the first study analysing the components constituting the delay in antibiotic administration in children with a diagnosis of possible sepsis. The study identified easily avoidable delays including time until seen by a doctor and time from diagnosis to prescription of an antibiotic. There was no evidence of a relationship of a more rapid management of patients with suspected sepsis with risk of sepsis, final confirmed sepsis diagnosis or disease severity or seniority of doctor involved before antibiotic administration. The overall delay in antibiotic administration to more than an hour was mainly attributable to an increased time for the intervention by the doctor and between being seen and the antibiotic prescribed. Training nurses to do prescribing and pre-prescribed antibiotics as part of a sepsis care bundle may reduce this delay in situations of doctor shortage.

Limitations of this case control study include that the degree of proficiency in application of the sepsis pathway amongst doctors and the doctor/patient ratio was not known and may have influenced the time interval until seen by the doctor and time interval from sepsis diagnosis to antibiotic prescribing.

The delay between triage and being seen by the doctor, which was in absolute terms the biggest part of the overall delay in antibiotic administration could be shortened by training nurses at the point of triage to make the diagnosis following agreed pathways as outlined in national guidance (3) enabling them to alert doctors early and by training paramedics to pre-alert hospital staff during ambulance transfer. Delayed antibiotic administration in children with suspected sepsis resulted mainly from delayed review by a doctor and delayed antibiotic prescription after diagnosis.

Future larger studies in different settings (e.g., in a low-income country) need to check whether the results of this pilot study are reproducible in settings of different availability of medical and nursing staff and different levels of competencies of nursing staff, which in our setting were unable to prescribe antibiotics.

Reporting Checklist: The authors have completed the STROBE reporting checklist. Available at http://dx.doi.org/10.21037/jeccm-20-74

Conflicts of Interest: All authors have completed the ICMJE uniform disclosure form (available at http://dx.doi.org/10.21037/jeccm-20-74). The authors have no conflicts of interest to declare.

Ethical Statement: The authors are accountable for all aspects of the work in ensuring that questions related to the accuracy or integrity of any part of the work are appropriately investigated and resolved. Ethical approval or consent was not required for this service audit project. The study was conducted in accordance with the Declaration of Helsinki (as revised in 2013).