The feasibility of a novel, wearable Doppler ultrasound to track stroke volume change in a healthy adult

Over the last decade, point of care ultrasound (PoCUS) has grown substantially—not only as a diagnostic tool but also as a hemodynamic monitor (1,2). Indeed, Doppler ultrasound can detect instantaneous changes in stroke volume (SV)—allowing clinicians to know with greater accuracy when further intravenous fluid may be unwarranted and/or harmful (3). More specifically, both common carotid blood flow and corrected flow time (FTc) have been used as surrogates of SV to help refine fluid management in the emergency department and intensive care unit (ICU) (4-7). However, acquiring the arterial Doppler spectrogram is relatively time-consuming and prone to operator-dependent measurement errors secondary to: inadvertent manual displacement, angle-of-insonation error and/or changes in the aperture-to-depth ratio (8,9). Additionally, the blunted parabolic velocity profile in peripheral arteries (e.g. the common carotid artery) increases the variability of the sampling substrate for the operator (10). Sampling error and velocity over-estimation are well-known to occur in the common carotid artery (9) and may explain conflicting clinical data (11).

In an effort to simplify clinical acquisition of the arterial Doppler spectrogram and mitigate sampling error, we have built a wearable, continuous wave Doppler ultrasound patch that adheres to the neck at a fixed angle and insonates the entire velocity profile of the common carotid artery. Accordingly, the goals of this proof-of-concept technical note are to: (I) demonstrate the feasibility of measuring and monitoring change in the arterial Doppler spectrogram using a novel, wearable Doppler ultrasound patch (II) use pulse contour analysis and bioreactance technologies to quantify SV changes induced by preload modifying maneuvers; (III) establish that changes in SV are simultaneously observed in the Doppler pulse of the descending aorta and common carotid artery and (IV) show that the change in velocity time integral (VTI) standard deviation of the carotid artery (measured by the ultrasound patch) is less than that of the descending aorta (measured by a traditional, hand-held, pulsed wave system).

A healthy male volunteer with no known cardiovascular history and on no regular cardiovascular medications underwent a series of testing in a physiology lab. Written and informed consent was obtained and the study was approved by the Research Ethics Board of Health Sciences North.

The first protocol began with 60-seconds of quiet standing followed by 60-seconds of passive squat and a subsequent 60-second return-to-stand. The subject performed the first protocol in duplicate separated by at least 2 minutes of rest. The second protocol was identical to the first, however, rather than 60-seconds, each stand, squat and return-to-stand lasted 72 seconds. This second protocol was also performed in duplicate with at least 2 minutes of rest between maneuvers. The reason for the difference in protocol duration was the SV monitor. The pulse contour analysis device updates SV every 20 seconds, thus each stand, squat and re-stand portion of the protocol contained 3 distinct SV values. By contrast, the bioreactance device updates SV every 24 seconds. Accordingly, to obtain 3 distinct SV values for each stand, squat and re-stand, 72 seconds of recording at each position was made.

A traditional bedside ultrasound (Phillips Epiq 7, Cambridge, MA, USA) was employed to obtain a view of the descending aorta via the supra-sternal notch. The descending aorta was confirmed by identification of the left brachiocephalic artery and pulsatile flow away from the cardiac probe (2–7 MHz) in the supra-sternal notch; this method has been described previously (12). The sample area of the descending aorta was within 2 cm of the left brachiocephalic artery, mid-vessel with sample window of 4 mm and the angle of insonation was zero degrees as flow was directly away from the probe. The real-time spectral Doppler signal from the Phillips Epiq and the novel Doppler patch (Flosonics Medical, Sudbury, ON, Canada) (Figure 1) was cabled into at two-channel mixer (Roland Audio) to ensure synchronous recording of the aortic and carotid Doppler signals. The subject was a physician sonographer (JESK) who obtained the signal on himself and held the ultrasound probe in place during the SSS. He was blinded to the carotid signal and performed the protocol twice. He maintained the ultrasound probe in a fixed location by tightly pressing it into his suprasternal notch and maintained the Doppler gate mid-artery using simultaneous B-mode imaging. 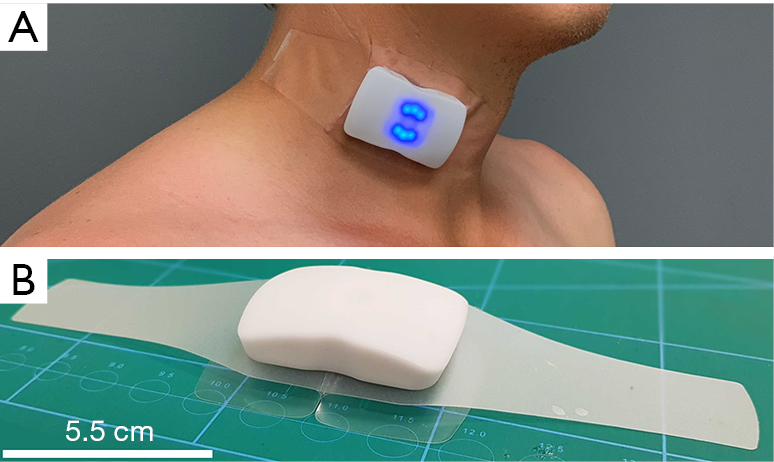 The carotid ultrasound patch was placed by palpation over the carotid artery below the angle of the jaw in an effort to ensure Doppler sampling below the bifurcation. The maximum velocity of the CW Doppler waveforms was automatically traced using an algorithm based on the approach described by Steinman et al. (13). The automated maximum velocity estimation for each timepoint in the waveform was used to calculate the VTI as the area under the curve. The duration of systole (i.e., from systolic velocity upstroke to the dicrotic notch, in milliseconds) was recorded from the CW Doppler patch and corrected for heart rate using Wodey’s formula (4) to obtain the corrected carotid flowtime (FTc):

As in the first protocol, the Clearsight® (Edwards Lifesciences) was applied to the subject in the standing position. In addition, the Cheetah® bioreactance monitor (Baxter Medical, Deerfield, IL, USA) was applied to the subject. In this protocol, we chose time 24–48 seconds as baseline (T1), and seconds 96–120 as peak squat (T2). Subsequently, T2 was compared to repeat stand at T3 (168–192 seconds). Descending aortic Doppler was not obtained in the second protocol, while the carotid artery Doppler patch was employed throughout. Both the VTI and FTc from the carotid artery were measured from the Doppler patch as described above; the second protocol was also performed in duplicate and was performed at a later date from the first protocol. The reason that the second protocol was performed at a later date was due to availability of the bioreactance device in the physiology lab.

The study was performed without any complication and hemodynamic parameters including blood pressure and heart rate remained within normal physiological ranges throughout the testing.

Hemodynamic effects of the stand-to-squat maneuver 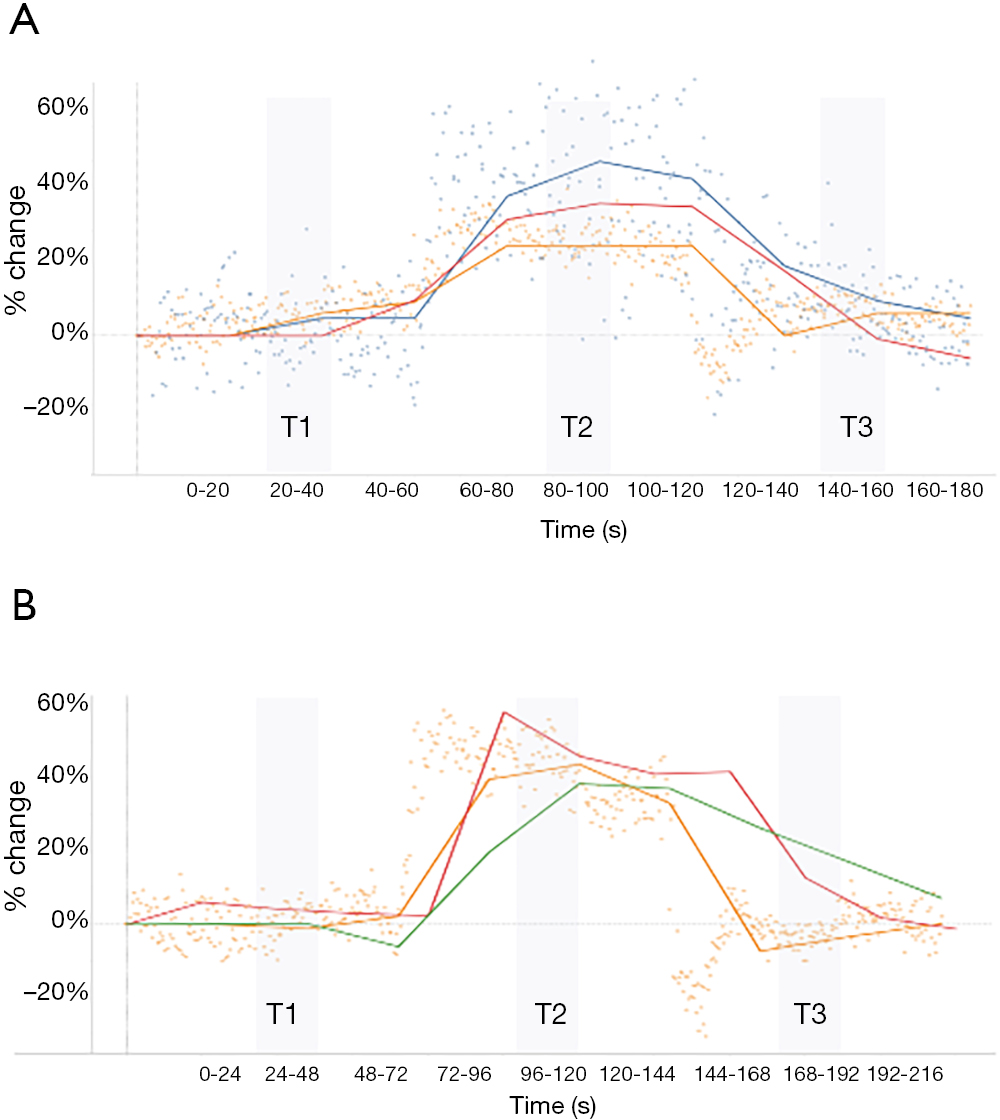 Hemodynamic effects of the squat-to-stand maneuver

Following the squat-to-stand in the first protocol, there was a clinically significant decrease in SV, aortic VTI, carotid VTI and carotid FTc. By pulse contour analysis, SV decreased by 27.9% (41.3 mL) while aortic VTI, carotid VTI and carotid FTc fell by 22.6% (6.5 cm), 13.9% (5.4 cm) and 18.2% (81.4 msec), respectively. In the second protocol, SV by bioreactance fell by 14.5% (47.4 mL), while SV by pulse contour analysis decreased by 27.0% (36.5 mL). Simultaneously, carotid VTI and FTc fell by 32.7% (13.1 cm) and 13.2% (46.6 msec), respectively. Table 1 reveals the summary for all changes recorded during the two protocols between T1–T3. Figure 2A,B shows the trend for all four devices across the two protocols. Overall, the standard deviation of the VTI measured from the descending aorta during the first protocol was 4.65 cm while from the common carotid it was 3.65 cm; these absolute standard deviations correspond to percent-change standard deviations of 21.2% and 11.8%, respectively. 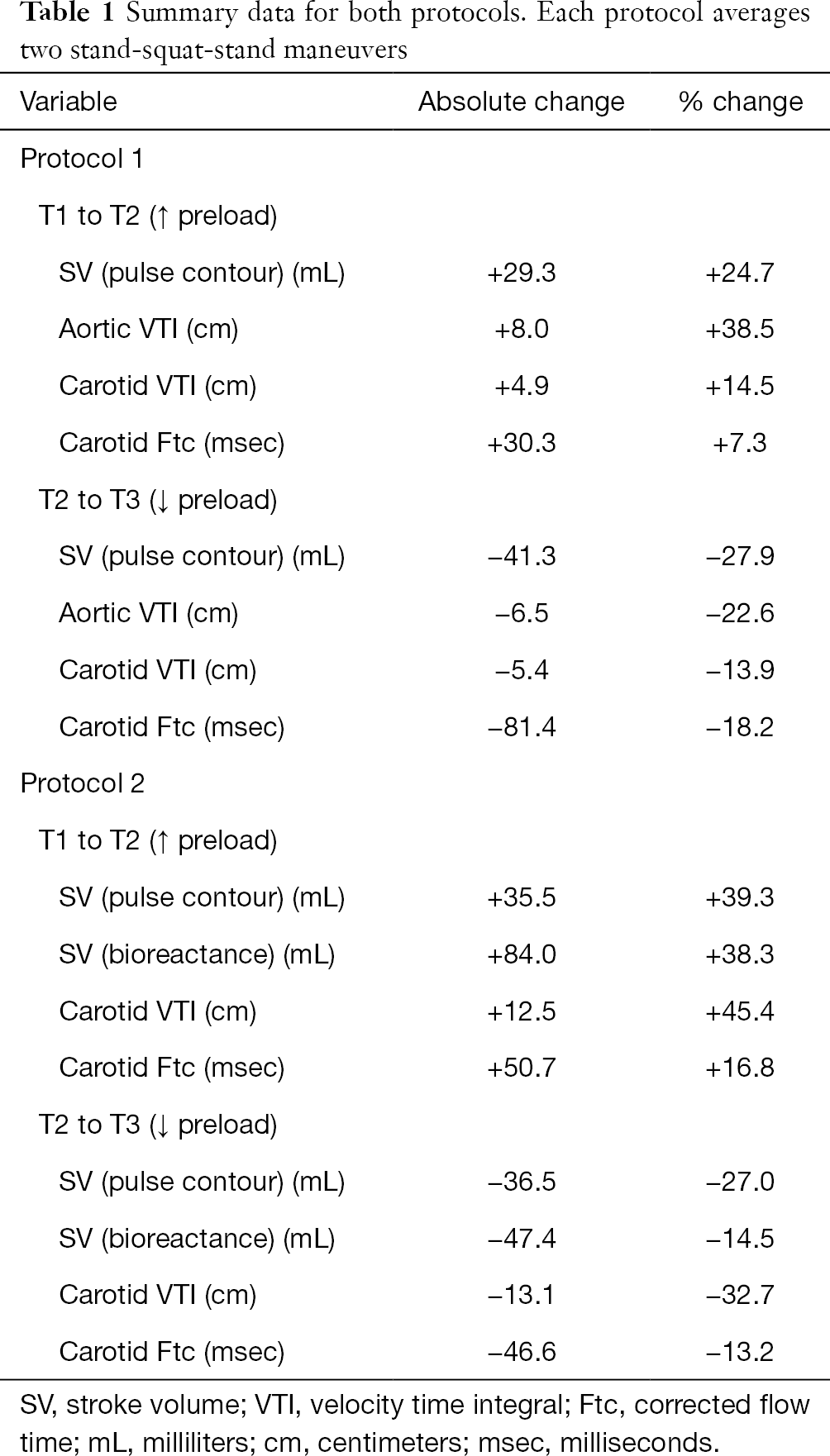 Our findings are clinically relevant because they represent, to our knowledge, the first report offering extensive and simultaneous comparison of multiple hemodynamic monitors with continuous monitoring of the carotid artery via a Doppler ultrasound patch. This analysis demonstrates that it is feasible to track instantaneous change in SV in a peripheral artery using a wearable Doppler ultrasound and supports previous studies that have successfully used the common carotid artery as a functional hemodynamic monitoring site.

We also note that in protocol 2, bioreactance SV monitoring appeared to lag in its response time as its percent fall from T2 to T3 did not match the percent rise from T1 to T2 (see Table 1 and Figure 2B). By contrast, on return-to-stand, pulse contour SV analysis as well as carotid VTI and FTc fell closer to baseline (T1) values, while SV by bioreactance did so only after the protocol ended (data not shown). Accordingly, the algorithms employed by the bioreactance monitor may be less able to detect rapid changes in SV. The change in SV between the two protocols likely represented differences in the subject’s volume status and, potentially, adrenergic tone, yet heart rate was similar. Nevertheless, despite there being different absolute change in SV between the protocols (Figure 2A,B), the change in carotid VTI was within 10% of both reference technologies.

Obvious limitations include the fact that testing was performed on a single volunteer and that reported alignment between the hemodynamic monitors on a healthy person may not be interchangeable with pathological conditions such as shock. In addition, all tested methods represent non-invasive technologies which could offer suboptimal accuracy in SV measurement. It is important to note that the reported accuracy of currently-available monitors vary without a widely-recognized gold-standard (18,19); this is the reason we chose to simultaneously test various technologies, applying a spectrum of methodologies to capture SV change. These limitations highlight the need for larger, more comprehensive studies of hemodynamically-compromised patients to extend our conclusions.

In summary, this technical note illustrates the clinical feasibility of measuring and monitoring the carotid artery Doppler pulse using a novel, wearable ultrasound patch. Our preliminary results corroborate previous investigations using Doppler ultrasound of the carotid artery for functional hemodynamic monitoring. Measurement variability may be reduced by using an adhesive Doppler patch with a fixed angle of insonation; further study in healthy subjects and in patients is needed.

The authors wish to thank Patrick Leonard for his technical assistance.

Conflicts of Interest: JEK, JKE, AME, MP and BFL are working with Flosonics, a start-up developing a commercial version of the Doppler patch. The other author has no conflicts of interest to declare.

Ethical Statement: The authors are accountable for all aspects of the work in ensuring that questions related to the accuracy or integrity of any part of the work are appropriately investigated and resolved. Written informed consent was obtained from the volunteer for publication of this manuscript and any accompanying images.