Perfluorocarbon was reported earlier before for treating traumatic retinal detachments (1), and it has been widely used since 1987. Perfluorocarbon liquids can compress and disorganize the retina and are used in a variety of ocular surgeries. Usually, because of the toxicity, residual perfluorocarbon is removed immediately after application and should not be seen in the radiology exams (2,3). Perfluorocarbon has barely been reported to enter the central nervous system. Malin et al. (4) reported a case of cranial perfluorocarbon, which for the first time, described the migration of perfluorocarbon in the cranial space.

A 65-year-old man was admitted to hospital because of a severe injury on the left eye. The man was hit by a rock 1 hour prior to the admission. His version was 20/60 of the left side. Examination showed left conjunctival congestion and swelling, corneal swelling, anterior chamber hematoma. The left pupil was deformed and dilated without a change in the levels of light. Lens was dislocated into vitreous chamber. Blood was seen in the vitreous body. Fundus was not seen clearly. The patient’s medical history was unremarkable. Preoperative laboratory tests were unremarkable. “Ultrasonic lens fragmentation + posterior vitrectomy + perfluorocarbon liquid instillation + photocoagulation + fluid-gas exchange” was performed to fix his left eye injury. In the surgery, 5 mL perfluorocarbon liquid was instilled. Right after the fluid-gas exchange, oxygen saturation and blood pressure dropped abruptly, and the patient was unconscious. The ophthalmologist immediately closed the incision, and epinephrine (1 mg) and rapid fluid replacement were given. After emergent intratracheal intubation, the patient was transferred to the intensive care unit (ICU) for further treatment. Despite 100% oxygen supplement and fluid resuscitation, the blood pressure and oxygen saturation failed to improve. Norepinephrine (1.0 µg/kg/min) was then pumped to maintain blood pressure. The positive end-expiratory pressure on the ventilator was set as 15 mmHg, arterial oxygen partial pressure/fractional inspired oxygen (PO2/FiO2) was 40. Brain natriuretic peptide, creatine kinase-MB, troponin, and electrocardiograph was normal. Bedside ultrasound showed pleural sliding, without “D” sign or pleural effusion. Ejection fraction (EF) was 68%. Thoracic X-Ray showed effusion in both lungs (Figure 1). Therefore, veno-venous extracorporeal membrane oxygenation (V-V ECMO) was performed to maintain oxygen saturation. Head computed tomography (CT) showed hyperdense aggregation around the optic nerve and in the cerebellum (Figure 2A,B). The radiodensity of the aggregates was 550 HU. The ophthalmologist revealed only little perfluorocarbon remained in the eye at that time. Therefore, the aggregates were suspected to be the perfluorocarbon. The patient recovered gradually, and ECMO was discontinued 4 days later. Then the patient was encouraged to keep an upright position to facilitate the downward flow of perfluorocarbon (density 1.75 g/mL). Seven days after the surgery, a CT scan showed perfluorocarbon was at the thoracic vertebra level (Figure 2C). On day 21, it arrived at the level of lumbar cisterna (Figure 2D). Lumbar puncture was then performed on day 23. During the puncturing, lower extremities, head, and chest were raised to make the puncture site lowest. The patient was asked to keep either left or right lateral decubitus position. Finally, 4 mL perfluorocarbon was extracted (Figure 3). After treatment, the patient had left vision loss, but other symptoms fully recovered without other neurological sequelae. 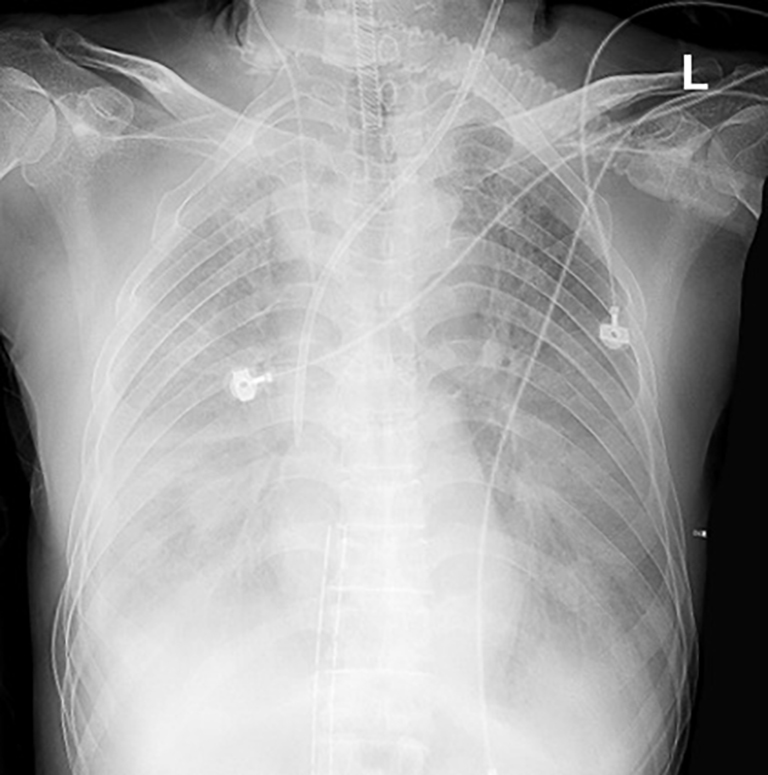 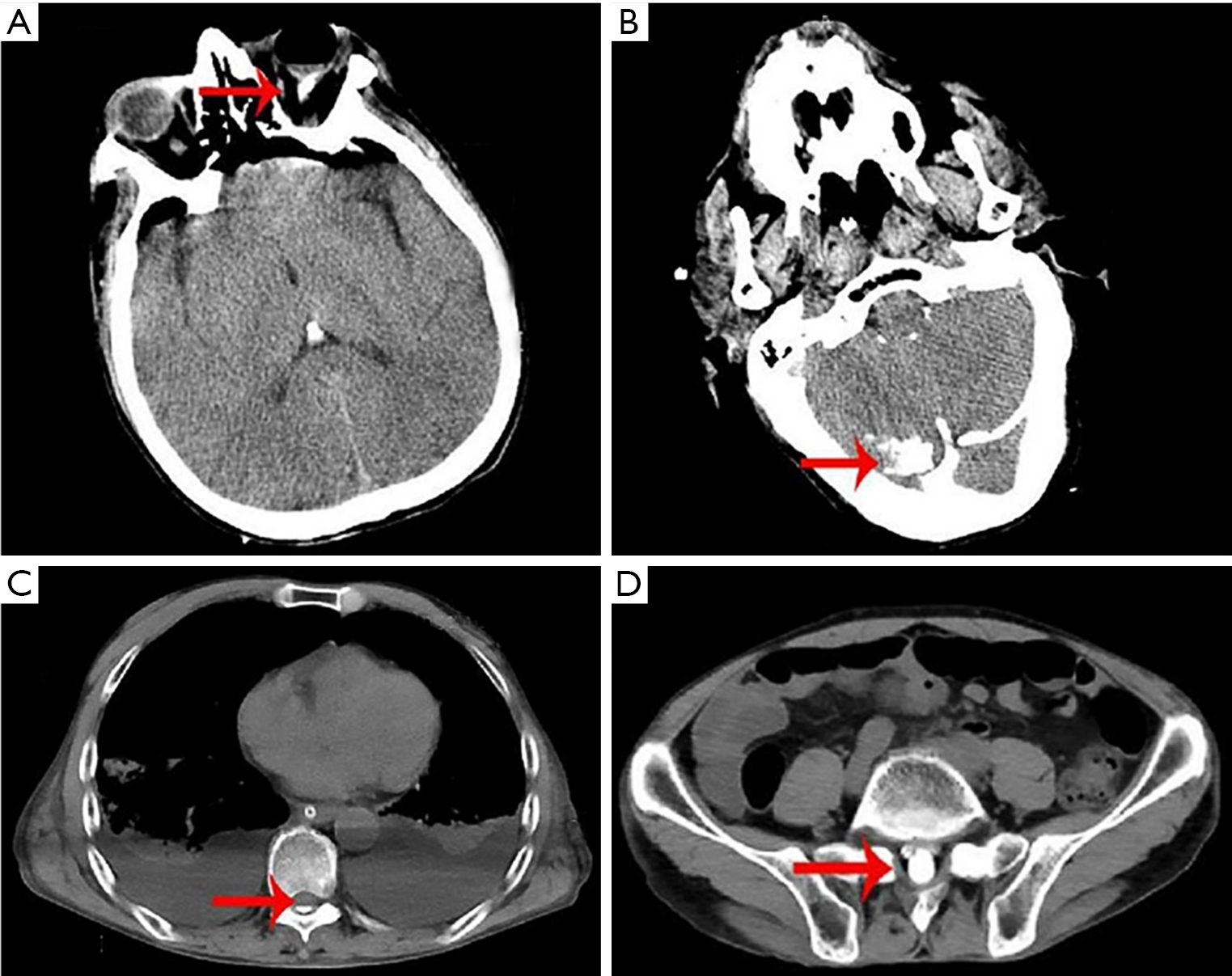 The patient with no known cardiac or pulmonary abnormality experienced a sudden decrease in oxygen saturation and blood pressure during eye surgery, indicating causes other than the cardiac or pulmonary origin. Besides, this patient had no skin rash, fluid resuscitation or epinephrine failed to improve the symptoms, which excluded anaphylactic shock. Since the symptoms initiated during the ocular surgery, and with the help of radiology exams, we believed that perfluorocarbon could potentially enter the cranial space through the optic nerve sheath and then gradually increased intracranial pressure. These together might trigger neurogenic pulmonary edema and neurogenic shock. In reasonable condition, blood-retinal barrier and blood-optic nerve barrier could separate optic nerve sheath with subarachnoid space. However, blunt trauma could damage the integrity of the blood-retinal barrier and further induce the communication between optic nerve sheath and subarachnoid space (4). In our case, the patient’s eye trauma might injure the blood-retinal barrier, and even the optic nerve sheath. With the increased intraocular pressure, perfluorocarbon might spontaneously circulate through optic nerve sheath to subarachnoid space, which changed the intracranial pressure. ECMO was necessary to improve the patient’s oxygenation and hemodynamics. In the end, the perfluorocarbon could be accessible by lumbar puncture.

According to our case, a significant amount of perfluorocarbon migrating into subarachnoid space could disrupt medullary autonomic activities. If neurologic signs, such as abrupt onset hypotension, hypoxemia, irregular respiration, or intracranial hypertension develops after perfluorocarbon application, perfluorocarbon leakage should be highly suspected. We propose that lumbar puncture is a possible way to remove partial perfluorocarbon.

Perfluorocarbon could enter the cranial space during ocular surgery and further migrate through subarachnoid space. It is crucial to discover the complication and make a treatment. We propose using lumbar puncture to remove perfluorocarbon after its sinking to lumbar cisterna by cerebrospinal fluid circulation and gravity.

Ethical Statement: The authors are accountable for all aspects of the work in ensuring that questions related to the accuracy or integrity of any part of the work are appropriately investigated and resolved. Written informed consent was obtained from the patient for publication of this manuscript and any accompanying images. A copy of the written consent is available for review by the Editor-in-Chief of this journal.