The mechanism for this effect is still unknown. Some have speculated that mannitol used to stabilize IV acetaminophen fluid concentration could be the reason for this transient hypotension (5,6). Because of mannitol, there is significant increase in UOP and renal vasodilation leading to redistribution of systemic blood flow (7). Yet in Chiam et al.’s adult prospective study, these effects were only seen in the IV acetaminophen group and not in the mannitol or normal saline group (8).

If this transient hypotension effect is correct, then cardiovascularly healthy post-surgical patients who undergo larger blood loss during surgery, high inflammation leading to increase vascular permeability, and increased fluid changes post-surgical are at greater risk for hemodynamic instability. One surgery in which patients undergo prolonged substantial blood loss, inflammation, and fluid changes is posterior spinal fusion (PSF) surgery. Therefore, this study was performed to investigate a cardiovascularly healthy adolescent population receiving scheduled IV acetaminophen after PSF surgery. The primary objective of this study was to see if there were transient hemodynamic effects after giving IV acetaminophen in a cardiovascularly healthy adolescent population directly after PSF surgery. The secondary objectives of this study were to see if transient hypotension was associated with changes in urine output (UOP), and if these transient hemodynamic effects changed with subsequent IV acetaminophen dosing.

This study protocol was approved by the Naval Medical Center Portsmouth Institutional Review Board in compliance with all applicable federal regulations governing the protection of human subjects. Research data was derived from an approved IRB protocol: number NMCP.2019.0079. Written informed consent was not required by the Naval Medical Center Portsmouth IRB, as this data concerned historical de-identified patients.

All statistics performed in this study were calculated using SPSS Statistics program (IBM Corp. Released 2017. IBM SPSS Statistics for Windows, Version 24.0. Armonk, NY, USA: IBM Corp). The three groups were defined as absolute hypotension, relative hypotension, versus non-hypotension, and the descriptive factors were compared using ANOVA or Kruskal-Wallis tests, for parametric or non-parametric data respectively. These included age, weight, BMI, IV fluids given during surgery, IV acetaminophen dosage, number of vertebrae fused, vertebrae Cobb angle, and EBL (Table 1). A repeated measures mixed ANOVA were ran for HR, MAP, and UOP, in order to determine the effect of IV acetaminophen over time, as well as between groups. Mauchly’s test determined the assumption of sphericity for all two-way interactions, and adjustments were made when appropriate. All analysis was conducted at a significance level of 0.05.

Twenty-eight cardiovascularly healthy adolescent patients underwent scheduled IV acetaminophen directly after PSF surgery. The first 3 scheduled doses (total of 84 doses), were used for analysis since this is an area of concern for hemodynamic instability directly post-operative. Characteristics of this patient cohort are found in Table 1. There was a significant difference in EBL during surgery between the absolute hypotension, relative hypotension, and non-hypotension groups (P=0.043, Table 1). There was no significant difference in baseline MAP between each group (P=0.155). Each IV acetaminophen dose was analyzed separately to explore if there were changes or persistent transient hypotensive effects with each subsequent IV acetaminophen dose. 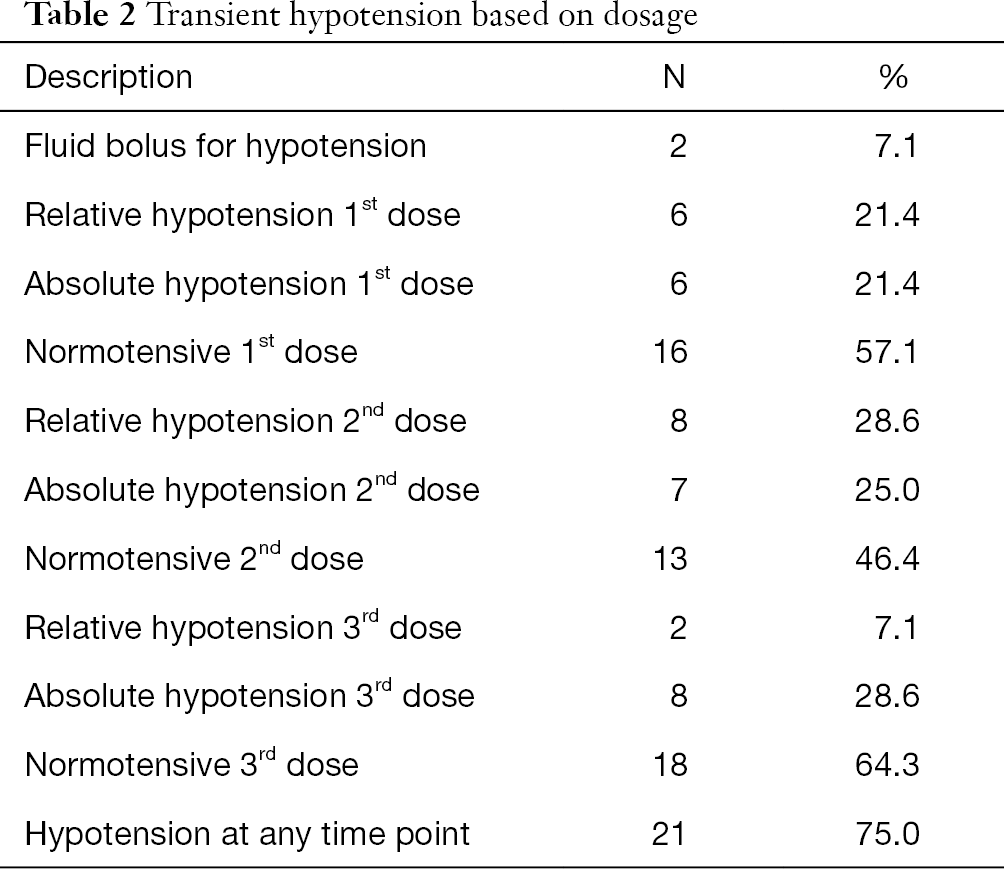 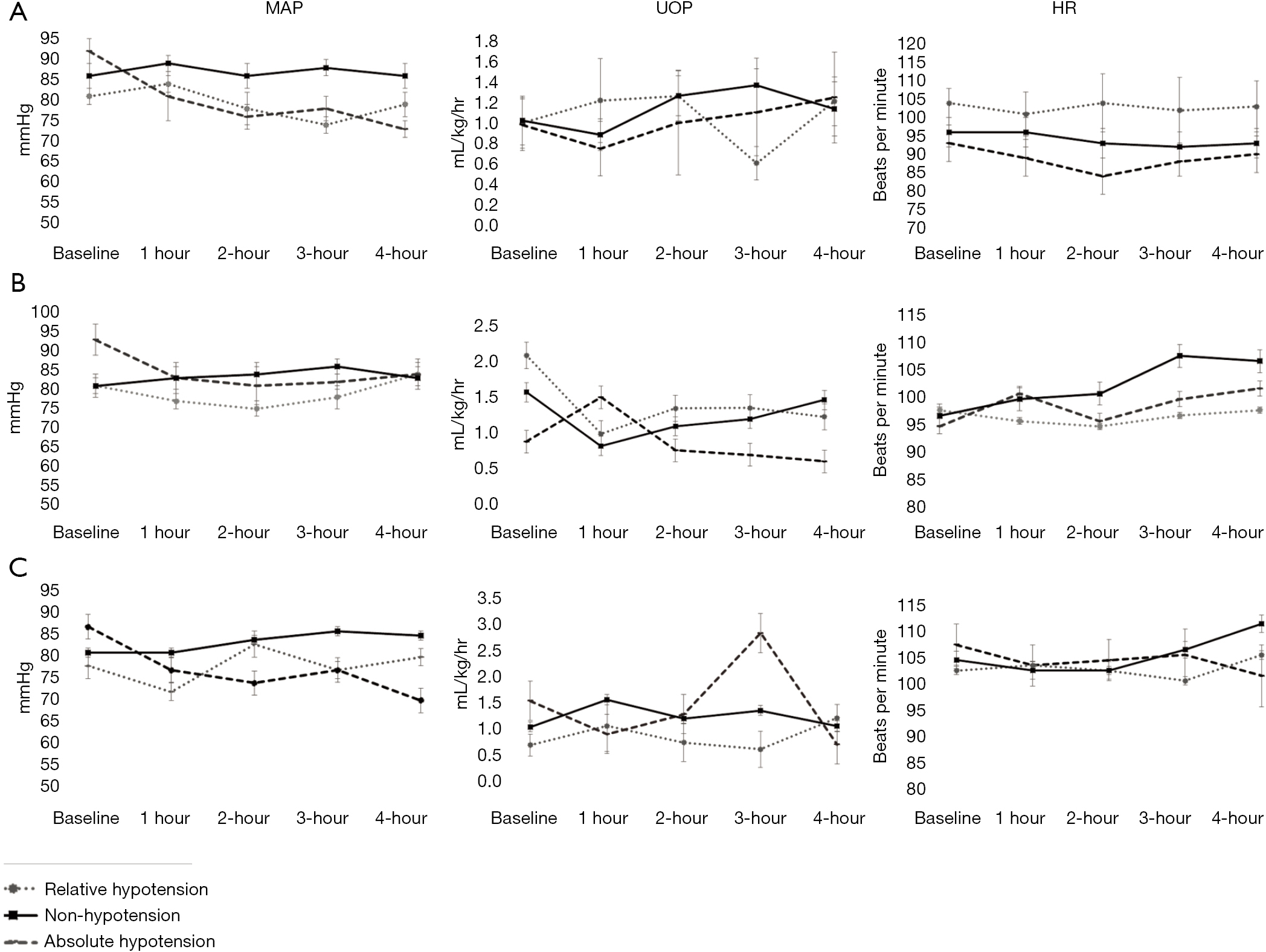 We found that only absolute hypotension, as defined by a 15% or more MAP decrease from baseline MAP obtained prior to IV acetaminophen dose given, represented true blood pressure differences from those who remained normotensive (Figure 1). This subset of the population had significantly higher EBL during surgery (P=0.043, Table 1). It was this population that even had 7.1% of the population requiring normal saline fluid boluses to resolve their hypotension immediately after their first dose of IV acetaminophen. Thus, it can be concluded that those who experience greater EBL from surgery should not necessarily receive IV acetaminophen immediately after surgery during PICU recovery.

Another novelty about this study was that we explored the effects of repeated IV acetaminophen doses in a patient within the first 24 hours after surgery. Interestingly, we saw that IV acetaminophen had significant hypotensive effects after the first dose (P=0.015, which was given in the first 6 hours post-operatively), but did not have significant blood pressure effects with subsequent every 6 hours scheduled doses 2 (P=0.286) and 3 (P=0.068) (Table 3). This hints to a possible adaptive response, therefore making the effects of excipients of IV acetaminophen (such as cysteine) more likely to be the mechanism for transient hypotension. Since surgeries such as PSF are known to cause a significant increase in pro-inflammatory cytokines immediately after surgery (14), any additional pro-inflammatory response can lead to loss of vascular tone, causing hypotension. Since IV acetaminophen leads to a rise in systemic cysteine levels, this can lead to a rise in interleukin (IL)-1β, which is known to cause hypotension via capillary leak (15). It thus makes sense that, the further away from surgery and the decreased baseline inflammation in a patient, the fewer significant transient hypotensive effects are seen (Figure 2).

A limitation of this study is its population size. Due to the demand and length of time PSF surgery takes, only a few surgeries are performed per year. In order to increase the population size, this study would take over 10–15 years to generate a stronger statistically powered study. Even though this study’s population size does not generate a substantial statistical power, due to the novelty and results, this study should be used to construct further prospective studies of cardiovascularly healthy adolescents. Another limitation of our study is the frequency of blood pressure and UOP monitoring. We were only able to analyze changes every hour. However, hemodynamics are consistently changing. Thus, to make more precise hemodynamic trends post IV acetaminophen dose administration, minute by minute analysis would give even more precise trends. However, based on previous pediatric studies (1,4) the time frequency chosen was appropriate to see actual blood pressure changes due to IV acetaminophen dose administration.

Overall, based on this study’s results, it appears that IV acetaminophen is still an appropriate non-opioid based post-surgery analgesic for a cardiovascularly healthy adolescent population. However, caution must be given to withhold IV acetaminophen in high inflammatory excessive blood loss surgeries immediately after surgery.

We like to thank all Pediatric Intensivists and Pediatric Orthopedic Surgeons involved in patient care. We would also like to thank Andrea McGlynn with her help and guidance with statistics used in this study.

Ethical Statement: The authors are accountable for all aspects of the work in ensuring that questions related to the accuracy or integrity of any part of the work are appropriately investigated and resolved. The study protocol was approved by the Naval Medical Center Portsmouth Institutional Review Board in compliance with all applicable Federal regulations governing the protection of human subjects. Research data derived from an approved Naval Medical Center, Portsmouth, Virginia IRB, protocol; number NMCP.2019.0079.