Sepsis is a life-threatening organ dysfunction due to a dysregulated host response to infection defined by the Third International Consensus Definitions Task Force (1). It is the most costly disease in the Intensive Care Unit (ICU), covering 23.7 billion dollars (6.2%) of the aggregate costs for all hospitalizations according to the report of Agency for Healthcare Research and Quality (US) (2). The Definitions for Sepsis and Septic Shock (Sepsis-3) (3) updated with criteria for sepsis as suspected infection with associated organ disorders, named Sequential Organ Failure Assessment (SOFA ≥2) (4). The latest version on sepsis identification was certificated to be more effective (5,6).

Sepsis accounts for approximately 70% of clinical disorders from which results in acute respiratory distress syndromes (ARDS) (7), with rapid organ failure, especially for the lung. When the lung was affected, they tended easily to have respiratory failure because of the severe systematic inflammation, and the patients with sepsis are recommended to receive the mechanical ventilation (MV) (8). However, most sepsis patients are more sensitive to MV, and easier to suffer from direct mechanical injury, which could further aggravate the high rates of morbidity and mortality (9,10). Whether we should treat septic patients with protective MV ahead of the respiratory failure coming is still under discussion.

So we studied the deliberated problem based on the latest criteria for septic patients with detailed and specific electronic health records (EHRs) storing in the MIMIC-III database. The association between MV and the risk of hospital mortality were performed in large sample septic patients.

Data were obtained from the Medical Information Mart in Intensive Care (MIMIC)-III database v1.4 (11) (https://mimic.physionet.org/). It’s an open-access de-identified critical care dataset with 23,620 large ICU admissions. The authors’ access to MIMIC-III were approved by Institutional Review Boards of BIDMC and MIT via the training course. The study was reported according to the REporting of studies Conducted using Observational Routinely collected health Data (RECORD) statement (12).

The study population were extracted from the whole MIMIC-III database, with the including the sepsis-3 (3) criteria for sepsis as suspected infection with associated organ disorders, named Sequential Organ Failure Assessment (SOFA ≥2) (4). We chose patients admitted from 2008 to 2012 as Alistair explained (6): antibiotic prescriptions, explicit sepsis codes, and the new vision of MetaSource are accessible since the year of 2008. And the exclusion criteria were as follows: (I) age below 16 years; (II) experienced cardiac operation; and (III) suspected of infection more than 24 hours before or after ICU admission. The final number of included cohort was 5,783.

We fetched the matched data with structure query language (SQL) in PostgreSQL (v10.10) (https://www.postgresql.org/) with the sepsis3 code for MIMIC-III recomposed (13). We precisely replicated the SOFA and Sepsis-3 criteria to define the suitable admissions. And patient demographics (age, gender, ethnicity, fist admission service, admission type and location), diseases (diabetes and metastatic cancer), and clinical outcomes. The primary outcome was hospital mortality of septic patients, and the secondary results were thirty days’ mortality, hospital and ICU length of stay (LOS).

Demographics for the cohort which was grouped by MV management were analysed. Univariate analysis conducted to figure out the related variables. The t-tests were used to compare the continuous data and the results were present as median and 95% confidence internal (CI). For categorical data, we used the Pearson’s chi-square test to get the group numbers and percentages. A two-tailed P<0.05 was considered statistically significant. As for the missing data, we assumed they were lost at random, and less than 10% was replicated with multiple imputation to avoid bias when necessary (14).

The significant variables were obtained after the univariate analysis, we proceeded the multivariable logistic regression and cox proportional hazard regression analysis (15) with the survival package (16) to study the potential factors influencing the mortality and LOS of septic patients. The visualization was used the ggplot2 package (17). The tables were created with the CBCgrps package (18).

All statistical analysis was conducted on the R platform (v3.6.1) (http://www.R-project.org). 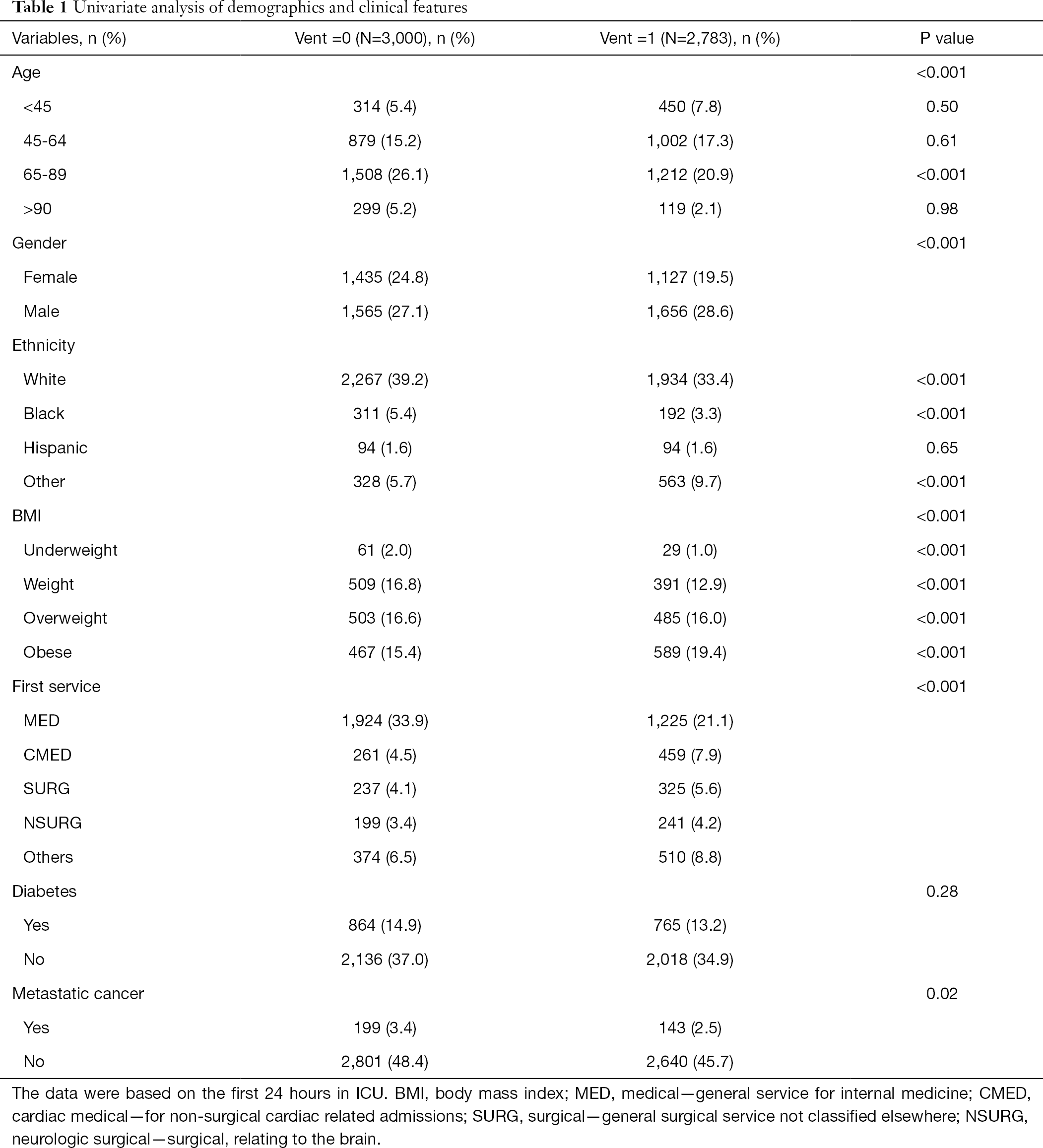 Clinical outcomes based on the different MV groups are presented in Table 2. Among the MV group, patients have worse clinical outcomes including the mortality rate and LOS. 10.7% survived less than thirty days after admitted in the ICU, which was significantly much higher than the percentage of non-MV group (7.3%, P<0.001). Moreover, 9.8% patients of MV therapy and 4.7% patients of non-MV therapy died during hospitalization (P<0.001).

As regard to the LOS, the MV group with sepsis tended to have longer days with the median length of hospitalization and ICU stay was 9.13 and 4.03 days, respectively, while that for the non-MV sepsis patients was 6.24 and 1.88 (P<0.001 for both). The Kaplan-Meier curve for hospitalization survival by MV is shown in Figure 1, indicating the obvious advantage in the non-MV group compared with the MV (log-rank test P<0.0001). 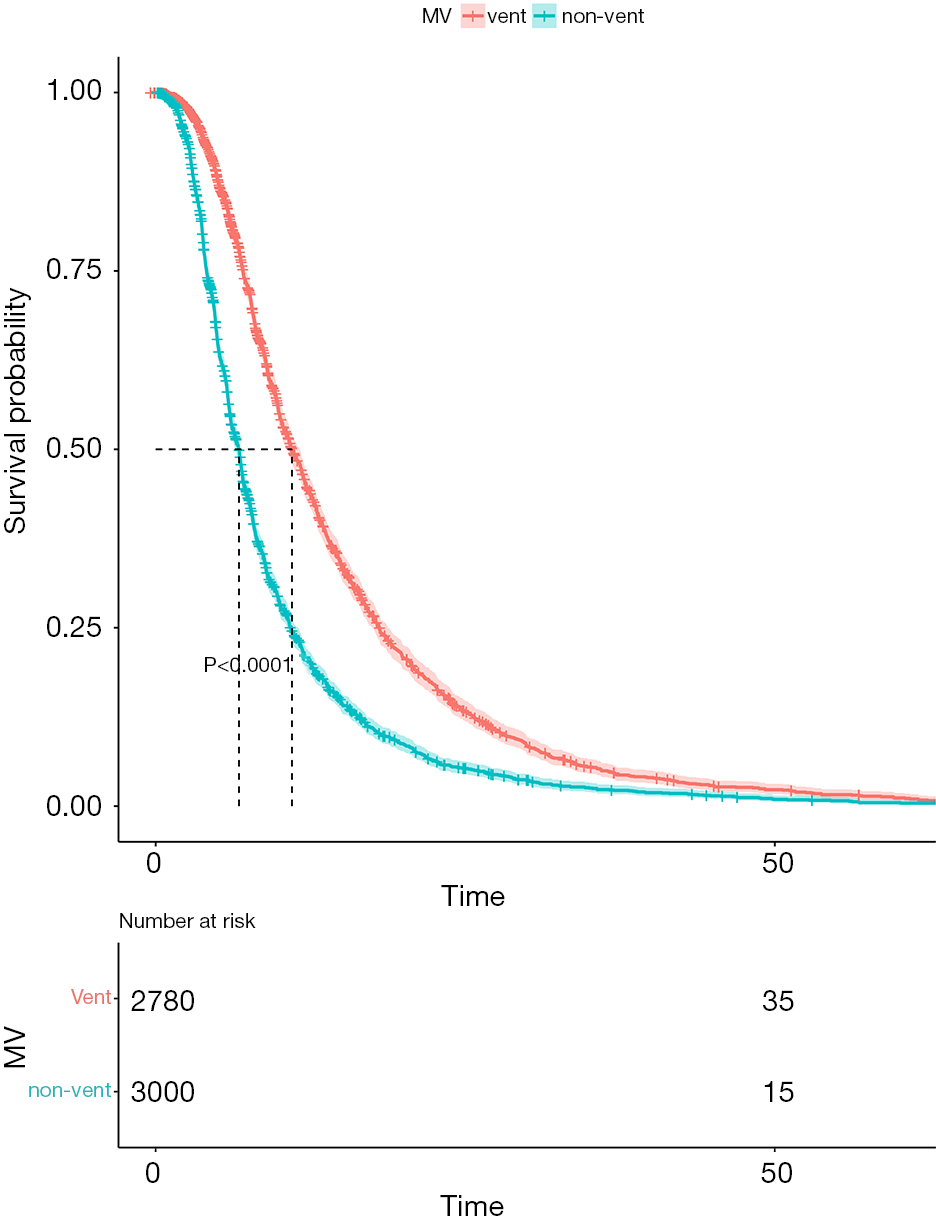 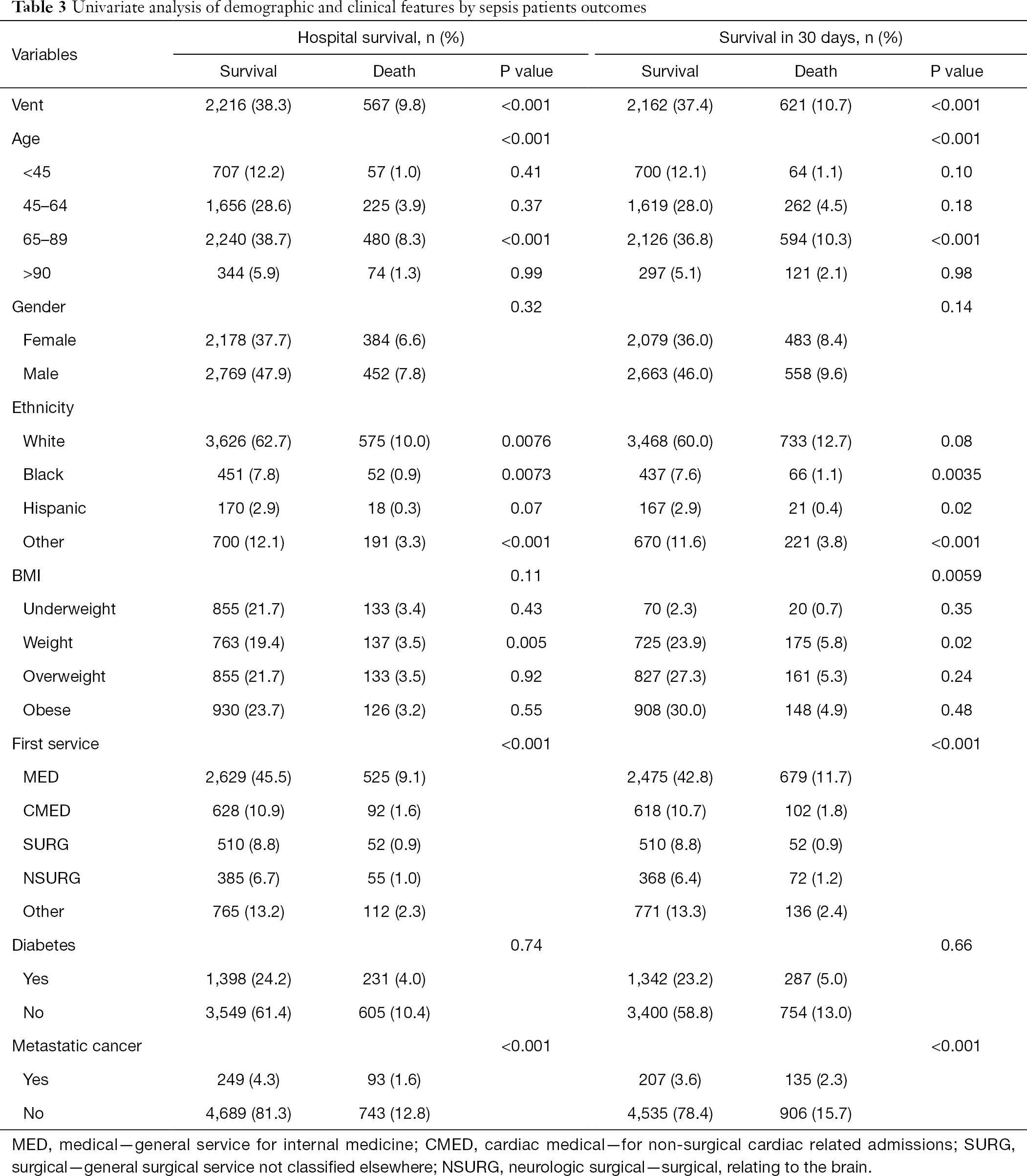 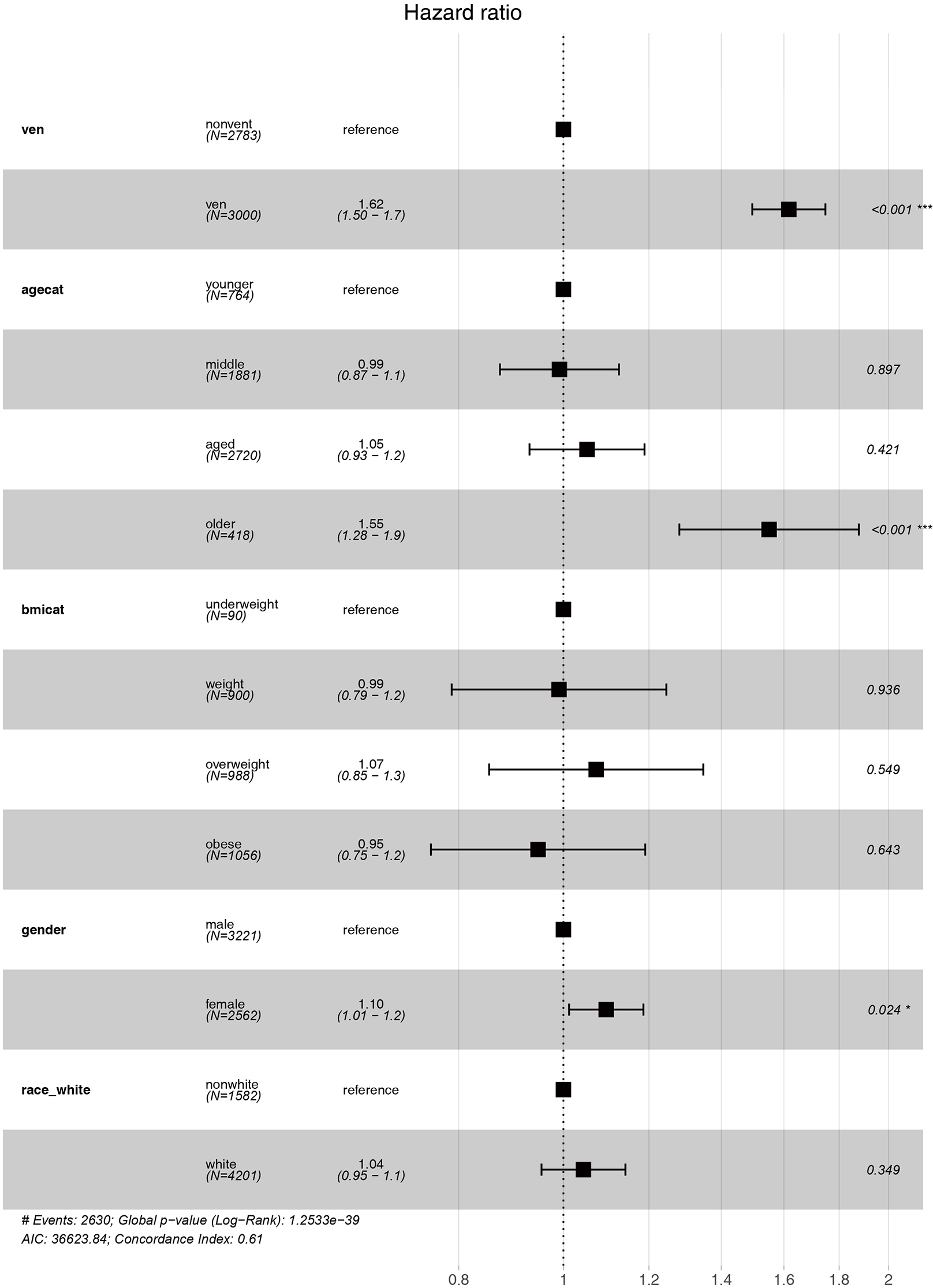 Little studies discussed the relationship between MV and clinical outcomes in patients meeting the criteria sepsis-3, mostly focused on the ventilation mode and parameters. Understanding how invasive ventilation could hurt lungs has developed over years (19), however, the results of whether septic patients should receive invasive ventilation are still controversial. We obtained the 5,783 patients meeting the sepsis-3 criteria for the further retrospective cohort analysis. To ensure the reliability, we grouped patients into the MV group and non-MV group from considerably large number of population. Interestingly, the study recruited patients who required MV for 48 hours or more but did not have ARDS at the onset of MV from the International Mechanical Ventilation Study database, and found that is the initial ventilator settings, in particular large tidal volumes, had potential harm (20). In addition, high MV power was independently associated with higher in-hospital mortality in ICU patients receiving invasive ventilation for at least 48 hours (6). They suggested that ARDS in mechanically ventilated patients is a partial preventable complication. There was a systematic analysis about the patients without ARDS receiving lower tidal volume of invasive ventilation, and the results got greater clinical outcomes (21). Similarly, another claimed that mechanically ventilated patients without ARDS benefited from the lower tidal volume to alleviate ARDS (22).

Female had a higher risk on sepsis development, which conflicted with a study specialized in the sex impact (23).The study reported male patients with sepsis had higher mortality rate and LOS of hospital and ICU, however, the male were tended to have more treatments. Sepsis patients with metastatic cancer was related with the worse clinical outcomes, while the disease state of diabetes had no significant influence.

Our limitations still existed. We obtained from the two large cohort derived from a retrospective and single-center database. The population met the novel sepsis-3criteriawhich is still under uncertificated proof. The criterion is strongly advised SOFA and quick SOFA (qSOFA) instead of lactate based on the mortality of the patients, and it is proven that SOFA has better predictive validity for in-hospital mortality than SIRS and qSOFA in ICU from 148,907 patients and 184,875 patients respectively (5,24). Meanwhile, compared with Sepsis-2 shock, there has a much higher Acute Physiology And Chronic Health Evaluation II (APACHE II) score, with greater mortality on Sepsis-3 septic shock (25). Systematic interpretation could not be merely involved in one single dependent factor, and it is inevitable to ignore other mixed variables. The results indicated the physician must be very cautious about the need for MV in patients under the sepsis-3 criteria. To discover more exactly, we are on procession on following up the patients who has not yet progressed to respiratory failure or ARDS to predict their lung involvement severity and mortality.

The clinical outcome in mechanically ventilated patients met the sepsis-3 criteria is worse than that in non-MV sepsis patients as regard to the mortality and length of hospital and ICU stay.

Thanks to Dr. Zhongheng Zhang for his help and guidance in the research and the team of the Laboratory for Computational Physiology from the Massachusetts Institute of Technology (LCP-MIT) who work to keep the MIMIC-III databases available.

Ethical Statement: The authors are accountable for all aspects of the work in ensuring that questions related to the accuracy or integrity of any part of the work are appropriately investigated and resolved. The authors’ access to MIMIC-III were approved by Institutional Review Boards of BIDMC and MIT via the training course.