Gas gangrene, also known as clostridium myonecrosis, is a severe and devastating infection that can be classified as either traumatic or spontaneous. Traumatic gas gangrene contributes to 70% of gas gangrene cases, of which 80% are caused by Clostridium perfringens. Most cases of spontaneous or atraumatic gas gangrene are caused by Clostridium septicum (1). Spontaneous gas gangrene has a mortality rate as high as 80%; this remains high despite the currently available modern management options (2). Here, we report a unique case of spontaneous gas gangrene in the setting of C. septicum bacteremia involving various body organs and tissues. This case presented with atypical clinical manifestations that deteriorated rapidly to death within 18 hours of symptoms onset. It is the first reported human case of multiorgan C. septicum gas gangrene and it also highlights important clinical, radiological, and pathological features along with the fatal and rapid deteriorating nature of such a condition. We present the following case in accordance with the CARE Guidelines.

An 86-year-old man with a history of diabetes mellitus and myelodysplastic syndrome (MDS) presented with altered mental status. He was reported by his son to be confused and breathing rapidly a few hours before arriving at the hospital. Social history included no smoking, alcohol or illicit drug use and no relevant family history was reported. On presentation, he complained of feeling cold; however, he was afebrile. His vital signs were as follows; blood pressure of 157/77 mmHg, heart rate was 90 beats per minute, respiratory rate was 26 breaths per minute, and oxygen saturation was at 100% on room air. On examination, he was alert but was disoriented to time, place, and person with no other remarkable physical examination findings. Initial lab workup (Table 1) was significant for anemia, lactic acidosis, elevated creatinine, and hyperglycemia. Chest X-ray (CXR) on presentation was overall unremarkable (Figure 1A).

He was started on broad-spectrum antimicrobial therapy after blood cultures were obtained, and transfusion of two units of irradiated packed red blood cells was initiated. He was sent for a computed tomography (CT) scan of the head, which was negative for intracranial hemorrhage or acute pathology. Upon arrival from the CT suite back to his room, he was found to be in respiratory distress with an oxygen saturation of 80% as well as a systolic blood pressure of 40 mmHg. Subsequently, he was intubated and placed on mechanical ventilation, received several intravenous fluid boluses, started on vasopressors through a central line, and transferred to the intensive care unit. His vasopressor requirement continued to increase. An arterial blood gas (ABG) drawn after intubation showed severe acidemia, lactic acidosis, and a low bicarbonate level (Table 1). A CXR that was taken 2 hours after the prior CXR showed chest wall emphysema (Figure 1B).

On repeat physical examination, generalized subcutaneous emphysema was palpated on his entire body except for the head. No abscesses or wounds were identified on thorough skin and musculoskeletal examination. CT scans of the chest, abdomen, and pelvis were obtained and revealed pneumomediastinum, pneumobilia, bowel pneumatosis, and air in the right atrium, pulmonary artery, portal vein, as well as in the abdominal and pelvic systemic veins along with widespread subcutaneous and intramuscular emphysema in the chest, abdomen, and pelvis (Figures 1C,D,2A,B,C,D) 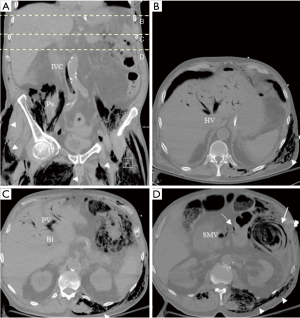 Figure 2 Coronal Computed tomography cut of the abdomen and pelvis (A) and 3 axial cuts (B,C,D) at the identified levels (dashed lines) displayed in wide window shows pneumobilia (Bi), intravascular air within the superior mesenteric vein (SMV), portal circulation (PV), hepatic veins (HV) and inferior vena cava (IVC), small bowel (dashed arrow) and large bowel (solid arrow) pneumatosis. Notice the extensive pneumatosis within the shown part of the splenic flexure (solid arrow), which was found to likely correlate to colon ulcer identified on autopsy and thought to represent the initial site of a bacterial breach into the systemic circulation. Extensive soft tissue emphysema (arrowheads) is also noted to involve the psoas muscles (Ps), the abdominal wall, including the perivertebral muscles and the visualized part of both lower limbs.

His clinical status continued to deteriorate until he lapsed into asystole cardiac arrest and was pronounced dead 18 hours after the onset of his initial symptoms. After his death, the blood cultures came back positive for C. septicum. Furthermore, the postmortem autopsy showed extensive gas gangrene involving the gastrointestinal tract, skeletal muscles, peritoneum, liver, skin, bilateral kidneys, soft tissues, and heart (Figure 3). No evidence of air embolism was found on autopsy. Additionally, the autopsy identified a benign colonic ulcer proximal to the rectum. Gram stain from the liver, heart, and colonic ulcer showed diffuse large gram-positive bacilli consistent with C. septicum (Figure 3). The timeline of the clinical course is outlined in timeline Figure 4. 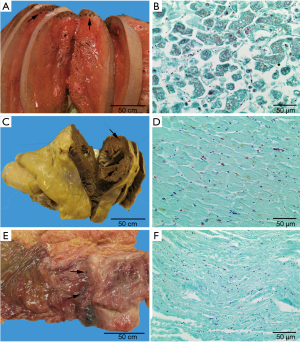 Figure 3 Disseminated extensive Clostridium septicum infection with associated gas gangrene involving multiple organs, such as liver (A,B), heart (C,D), colon (E,F), was identified during autopsy. Gas-filled cysts and necrosis can be seen in these organs which are indicated by arrows. Gram stains of the tissue sections demonstrate Gram-positive bacilli infiltrating and embedding in these tissues (B,D,F), which morphologically consistent with Clostridium species. 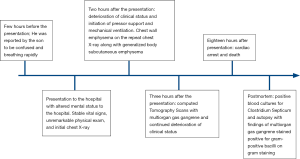 Figure 4 Timeline of the clinical course.

C. septicum is a gram-positive, anaerobic, spore-forming, and motile bacteria with four key exotoxins involved in the pathogenesis; the alpha toxin (hemolyzing necrotizing toxin), the beta toxin (DNAse), the gamma toxin (hyaluronidase), and the delta toxin (hemolysin toxin) (3). Spontaneous C. septicum gas gangrene has been linked to immunosuppression, neutropenia, and malignancy, most commonly gastrointestinal and hematological malignancies (1,3-6). Furthermore, diabetes mellitus has been shown to be associated with spontaneous C. septicum gas gangrene in 41% of the cases in one report (3).

Chart review of this case revealed that his MDS was being treated with as-needed blood products transfusion without chemotherapy. Moreover, his absolute neutrophilic count in the three months prior to the presentation was between 0.8 and 1.4 k/µL. Diabetes mellitus and neutropenia predisposed this patient to be immunosuppressed, as patients with diabetes were found to have functional neutropenia compared to controls (7); additionally, neutropenia and diabetes can predispose the gastrointestinal mucosal lining to disruption and ulceration as well as dissemination of the bacteria into the bloodstream (3). This is especially relevant since the most likely source of C. septicum bacteremia in the patient was the colonic ulcer that was found on postmortem autopsy and was likely represented by the extensive pneumatosis within the splenic flexure on the CT abdomen (Figure 2D).

The clinical presentation of spontaneous C. septicum infection is non-specific, as it can present as sepsis, abscess, soft tissue infection, neutropenic enterocolitis, or bacteremia (8,9). C. septicum spontaneous gas gangrene is typically associated with an insidious onset and pain in the affected area; however, the classic signs of crepitus and bullae occur late in the disease process. And the deterioration is rapid once the systemic toxicity arises, and death is mostly due to septic shock (10,11). Bacteremia secondary to clostridial organisms can vary in presentation from an asymptomatic patient with a positive blood culture to shock and death (3). The diagnosis of gas gangrene is made clinically; however, radiological findings of gas in the affected areas can assist with the diagnosis (5). And identifying the pathogen by culture confirms the diagnosis. Once clinically suspected, prompt management should be initiated with antimicrobial therapy, urgent surgical exploration, and debridement of the involved tissues (12). Mortality of spontaneous C. septicum has been reported to be 70% among 78 cases (3), 56% among 32 cases (6), and 80% among 241 cases (13) in three different reports. The limitations in the diagnostic approach to our patient included non-specific systemic symptoms that were mostly consistent with C. septicum bacteremia. Also, the finding of soft tissue crepitus, which was an important clue for further investigation, was a late finding on his exam. Moreover, he deteriorated rapidly, and he passed away 18 hours after symptom onset. The cause of death was thought to be C. septicum septic shock with extensive multiorgan gas gangrene. High clinical suspicion, initiation of targeted work up and investigations and proceeding with postmortem autopsy were helpful in yielding a final diagnosis in our patient.

Cases of body organs involvement with suppurative C. septicum infections with or without abscess or gas formation have been reported in prior separate case reports, and that included liver, thyroid, eye, aorta, brain, epidural space, and large joints (14-19). However, to the best of our knowledge, our patient is the first reported human case of invasive multiorgan gas gangrene secondary to C. septicum bacteremia, as evident by the CT findings and confirmed on the postmortem autopsy with gram stain of the tissues.

In conclusion, C. septicum gas gangrene is a rare and often fatal infection that is associated with immunocompromised status and malignancy, and it can lead to multiorgan involvement. A high index of suspicion is required to make the diagnosis, which is often challenging and associated with rapid deterioration. Once suspected, management with antimicrobial therapy and surgical evaluation should be promptly initiated.

Ethical Statement: The authors are accountable for all aspects of the work in ensuring that questions related to the accuracy or integrity of any part of the work are appropriately investigated and resolved. The patient is deceased, and all exhaustive attempts have been made to contact the family and they were not accessible. Any potential patient’s identifiers have been removed from the description/images and this paper has been anonymized not to cause any harm to the patient or the family. We believe our case would be a great teaching case for the clinicians.