Cerebrovascular accidents (CVAs) including strokes and transient ischaemic attacks (TIAs) form a major portion of perioperative morbidity, occurring in approximately three to ten percent of surgical patients requiring cardiopulmonary bypass (CPB) (1,2). These can be severely disabling complications, associated with a 3- to 6-fold increase in death after cardiac surgery (3). Despite multiple anaesthetic and surgical advancements over the past decade, these patients remain at high risk of adverse post-operative neurologic outcomes (4).

There remains a poor understanding of the pathophysiology of neurologic dysfunction in these post-operative patients (5). Proposed causes include tissue hypoxia, formation of reactive oxygen species (ROS), along with the formation of micro/macro-emboli (6). These theories are closely related to the (well established) risk factors for the development of perioperative CVA such as diabetes, hypertension, previous stroke and intra-operative hypothermia (7).

Treatments to counteract this effect are still being studied, however current suggestions include ongoing intraoperative cerebral oxygen monitoring and supplemental oxygen (10). Given the high rate and severity of complications, any intervention reducing the rate of complications would be expected to significantly benefit patient outcomes (11).

Further to the above, a recent study has established intraoperative hypoxia as an independent risk factor for perioperative CVA (12). Another study extrapolated their data to suggest cerebral oxygen saturation be used as an independent predictor for preoperative cardiac surgery risk stratification (13). Interestingly, whilst intraoperative hyperoxia has been linked to numerous adverse end-organ effects (14), these outcomes have not been demonstrated in the cardiac surgery population.

The primary aim of this study was to examine whether there was a relationship between increasing the intraoperative partial pressure of arterial oxygen (PaO2) and decreasing postoperative CVA risk.

This was a retrospective single-centre cohort study that included 2,779 consecutive patients who underwent on-pump coronary artery bypass grafting (CABG) between June 2000 and May 2013 at St. Vincent’s Hospital, a major Australian cardiothoracic surgical and teaching hospital in Darlinghurst, Sydney (Figure 1).

The St. Vincent’s Department of Cardiothoracic Surgery databases were analysed to extract information on all patients who met the inclusion criteria. Variables assessed included patient co-morbidities, surgical outcomes, and perioperative observations collected at 5-minute intervals. To minimize error, all data was prospectively collected and validated by reviewing original patient medical records and checked against electronic recordings from the central surgical databases and the CPB machine.

For this analysis, we included adult patients, who were scheduled for CABG with CPB. All rescue, emergency and elective procedures were included in this cohort.

All procedures were performed through a median sternotomy. CPB was established via a two-stage right atrial venous cannula with arterial return to the ascending aorta. Standard cold blood cardioplegia was used for myocardial protection, solely antegrade in 72.5% of cases, both ante- and retrograde in 22.8% of cases and either warm blood or cold crystalloid in the remainder.

The primary outcome variable for this study was a perioperative CVA, defined as either a stroke or TIA during the procedure or within 30 days after the surgery (15). A stroke was further defined as a persistent neurological deficit with changes on neurological imaging consistent with clinical signs. A TIA was defined as either an initial neurological deficit consistent with vascular pathology and resolving within 24 hours (as per the old definition), or by the absence of radiographic changes on MRI of the brain (as per the new definition) (16).

The main explanatory variable was intraoperative PaO2. Arterial blood samples were taken at 5-minute intervals and a range of parameters were measured. For the purposes of this study the average and nadir PaO2 were used for statistical analysis. The odds ratio (OR) for PaO2 was calculated as follows:

Statistical analysis was performed using Stata statistics software package, version 14.2 [2012]. Univariate and then multivariate regression analyses were used to analyse the association between the incidence of perioperative CVA and average/nadir intra-operative PaO2, controlling for cardiovascular and intraoperative risk factors. Results of the univariate analysis were considered for inclusion in the multivariate model for significance level P≤0.025. Results from multivariate analysis were considered significant for P<0.05.

A total of 2,779 patients were available for analysis, of these 526 were excluded. Exclusions for this study included: 75 patients who received additional cardiothoracic procedures at the time of surgery, including valve or ascending aorta replacement; 163 who had previous cardiothoracic surgery requiring CPB; and 282 for whom surgical outcome data were unavailable. Six patients had incomplete data pertaining to their intraoperative PaO2 levels and were excluded from analysis. The dataset was complete for all other variables. A total of 2,253 patients were therefore included in the final multivariate analysis. 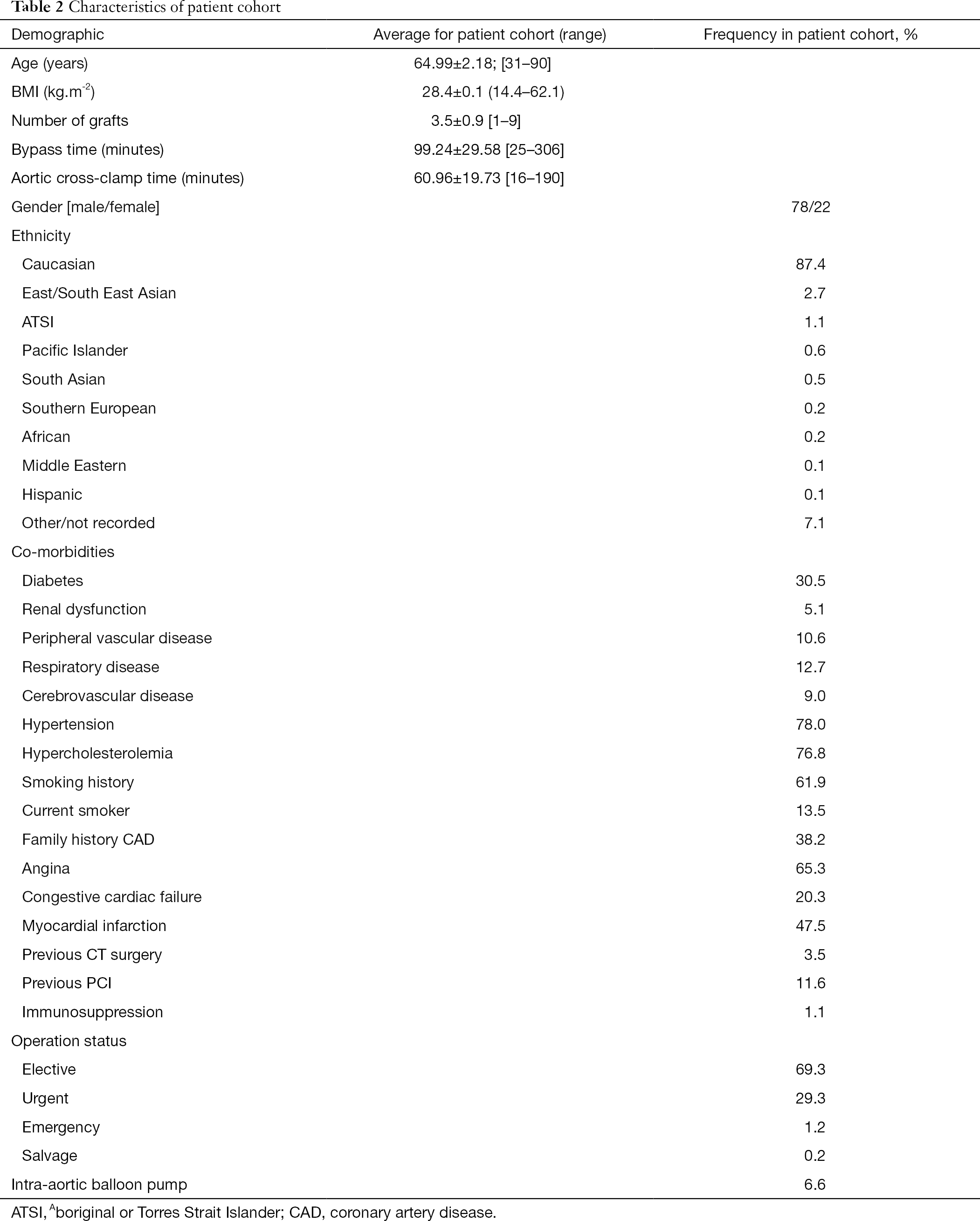 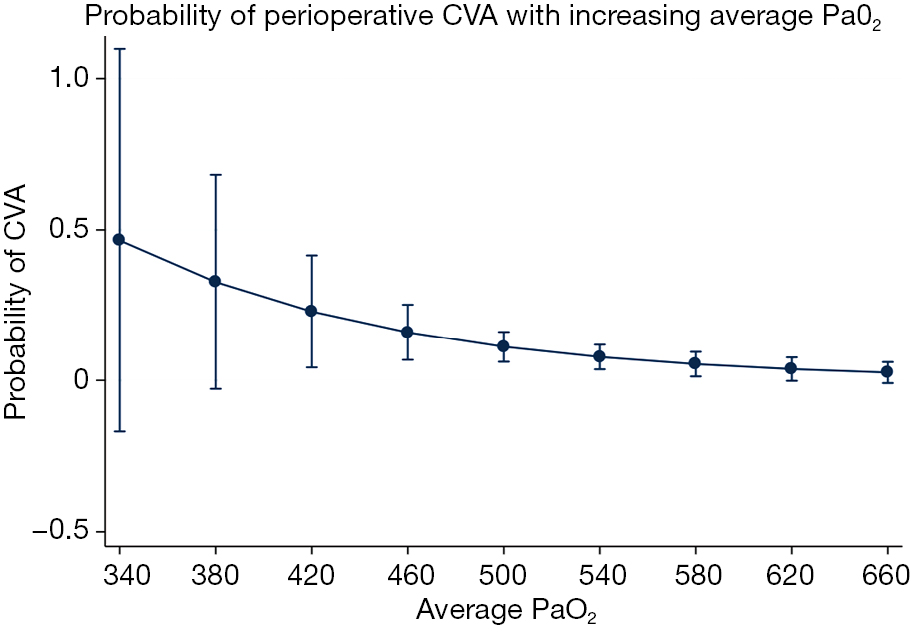 This study found that the increased average PaO2 and nadir PaO2 values were associated with a decreased risk of perioperative CVA. Even though there may be a limited magnitude of clinical significance, this data suggests that avoiding hypoxia might be a potential target for the treatment to reduce the debilitating and life-threatening burden of perioperative CVAs.

This thesis follows the paradigm of a recent study by Dunham et al. which demonstrated an increased stroke risk with intraoperative hypoxaemia as measured by arterial oxygen nadir and oxygen pressures (12). Our study builds on this by investigating a lager cohort with a broader arterial oxygen nadir (38–654 mmHg) and higher mean intra-operative arterial oxygen pressures (340–660 mmHg). Overall, given the findings, it would be reasonable to hypothesise a direct relationship between CPB CVA and reduced perioperative PaO2.

As with most disease processes, the cause is likely to be multifactorial. Pre-existing cerebrovascular disease, post-operative arrhythmias and the older age group all increase the risk of CVA (17). Further, the use of CPB increases the risk of introducing synthetic particles or air emboli into the blood stream, though this has been minimized through using an arterial screen filter (18). As such, hyperoxemia may reduce the incidence of post CPB stroke through reducing gaseous microemboli (19-21). The formation of microemboli during CPB by the extracorporeal circuit and entrainment into open heart chambers has been well described (6). These microemboli may progress to obstruct end-organ capillary beds. Given that these microemboli consist of air, hyperoxia will cause denitrogenation and reduce the size of these microemboli. Prior ultrasound studies have demonstrated the utility of post-operative hyperoxia to significantly reduce the microemboli burden following CPB (22).

Interestingly, Stroobant et al. failed to find any relationship between cognitive decline and US imaging findings in perioperative CABG patients (23). The role of intra-operative emboli needs further investigation, however, such analysis is outside the scope of this study.

Our findings are more suggestive of postoperative CPB CVA being related to tissue level hypoxia, as opposed to embolization. However, it should be noted that hypo-perfusion and embolism may co-exist.

A potential mechanism for the protective effect of increased arterial oxygen pressure may relate to a reduction in the initial tissue level hypoxic insult and thus preventing the cascade resulting in the formation of ROS. The protective effect of hyperoxemia is contrary to the growing body of non-cardiac surgery literature, which demonstrates the harmful effect of hyperoxia through the formation of ROS (24,25). If this is the case, the hyperoxia would counter-intuitively reduce ROS formation and thus prevent end organ ischaemia.

One final potential mechanism includes hyperoxia induced preconditioning. Both animal and human studies have previously demonstrated a neuroprotective effect with hyperbaric hyperoxic conditions. The mechanism by which this hyperoxia induces tolerance to ischaemic events is unclear.

Importantly, the reduction in post CABG CVA risk did not carry any associated increase in adverse effects. There was no correlation between increasing levels of hyperoxia and infective outcomes such as pneumonia, deep sternal wound infection and sepsis. This is in keeping with many prior studies which have demonstrated increased rates of infection associated with hypoxia and a no effect with increasing oxygen levels ranging from normoxia through to hyperoxia (22,26).

Increasing levels of hyperoxia also had no impact on the incidence of renal failure, myocardial infarction or cardiac arrest. The incidence of renal failure is a poorly studied outcome with varying definitions used for renal failure and acute kidney injury (6). This reinforces the results of a randomised controlled trials by Toraman et al. and McGuinness et al. which showed similar results, with no significant difference between near physiologic and hyperoxic groups (27,28). Similar to acute kidney injury, a wide variety of definitions have been used to investigate myocardial injury and infarction (6). The vast majority of these studies have found no link between hyperoxia and myocardial infarction. The present study is in keeping with current literature.

There were several limitations to this retrospective study. Firstly, there were no hypoxic patients to compare stroke risk to. However, the incidence of reduced stroke risk has been demonstrated in several prior studies and the aim of the present study was to determine if increasing levels of hyperoxia further reduced stroke risk without an increase in other complications. Secondly, there was a low-normal incidence of post-CABG CVA in the cohort of patients included in this study. The incidence was 1.2%, this was potentially related to the much greater levels of intraoperative hyperoxemia than has been reported in previous studies. There were also the intrinsic limitations of any retrospective study including the potential for unmeasured confounding variables that may have been missed in the multi-variate analysis.

We have demonstrated a significant trend between average intraoperative PaO2 and perioperative CVA, with CVA risk declining with increasing PaO2. Higher PaO2 was not demonstrated to be associated with increased risk of post-operative adverse outcomes including pneumonia, prolonged ventilation, perioperative myocardial infarction or cardiac arrest, sternal wound infection, sepsis or renal failure.