“It turns out that things are not so close as we imagined.”

Mupirocin ointment is commonly used in universal decolonization programme either alone or with chlorhexidine and other antiseptics. However, mupirocin has gained more and more attentions duo to the data of increasing drug resistance which was reported from 1% to 81% these years (3). It has been proved that previous mupirocin exposure is a great risk for both high-level [minimal inhibitory concentration (MIC) is above 512 mg/L] or low-level (MIC is in the range from 8 to 256 mg/L) resistance (4). Mupirocin resistance was first reported in staphylococci in 1986, just 1 year after it was introduced into clinical use. Beginning from the next year (1986 to 1987), resistant strains had been slowly spreading in England from 3% to 6% (5). The date of mupirocin resistance was also revealed in the following years in the other countries of Europe and in the North America (6).

Point mutations in ileS gene encoded by chromosomally is the main source of low-level mupirocin resistance. Meanwhile, high-level mupirocin resistance (HLMR) is thought to arise from the plasmid acquisition, which contains both the mupA resistance element and the modified ileS-2 gene. The emergence of HLMR is also linked to multi-drug resistant (MDR) which leads to clinical treatment failure easily (7). Plasmid-mediated resistance genes can spread between different staphylococcal species clonally and horizontally. Although ileS-2 does not encode resistance to other antibiotics, it is reported that the emergence of ileS-2 carrying plasmids has been associated with resistance to other categories of antibiotics such as erythromycin levofloxacin, clindamycin, tetracycline and so on (4,8).

Some types of local skin and soft tissue infections were treated by mupirocin due to the pathogen isolated were S. aureus and streptococcal species. It also contributes to mupirocin resistance (9). An observational study about bloodstream infection found that the percentage of coagulase negative staphylococci isolated which carried ileS-2 gene was elevated from 8% in 2006 to 22% in 2011, P<0.01. This drug resistance crisis went with the sustained growth of mupirocin consumption in each of the corresponding years (10). Therefore, the more mupirocin use, the higher rate of resistance it may occur.

Chlorhexidine is a major component in most decolonization programs. It is often used in various forms, such as hand rubs, mouth wash and skin antisepsis prior to surgery, although the real benefit and evidence are not clear (11). However, the inappropriate and off-label use of chlorhexidine led to more and more drug resistant organisms isolated which had attracted high attention from WHO.

The increasing rate of methicillin-resistant Staphylococcus aureus (MRSA) with qacA and/or qacB genes isolation was reported in Taiwan, where chlorhexidine has been used in hand hygiene programme for 20 years. Only 1.7% among the 240 isolates was verified with a chlorhexidine MIC of ≥4 mg/L in 1990 while it increased to 40% in 2000 and almost 50% in 2005 (16).

Wand and his colleagues identified that Klebsiella pneumoniae with chlorhexidine-resistant also has the feature of cross-resistant to colistin which is the last defense of multidrug-resistant (MDR) bacteria (17). They found that this sort of Klebsiella pneumoniae firstly adapted to chlorhexidine which could survive under antiseptic exposure and then developed cross-resistance to colistin. When the investigators explored the mechanism of the cross-resistance, they found the critical role of the progress was the efflux pump (smvR). They also took notice of the fact that the same efflux pump could be found in other different species (Figure 1). 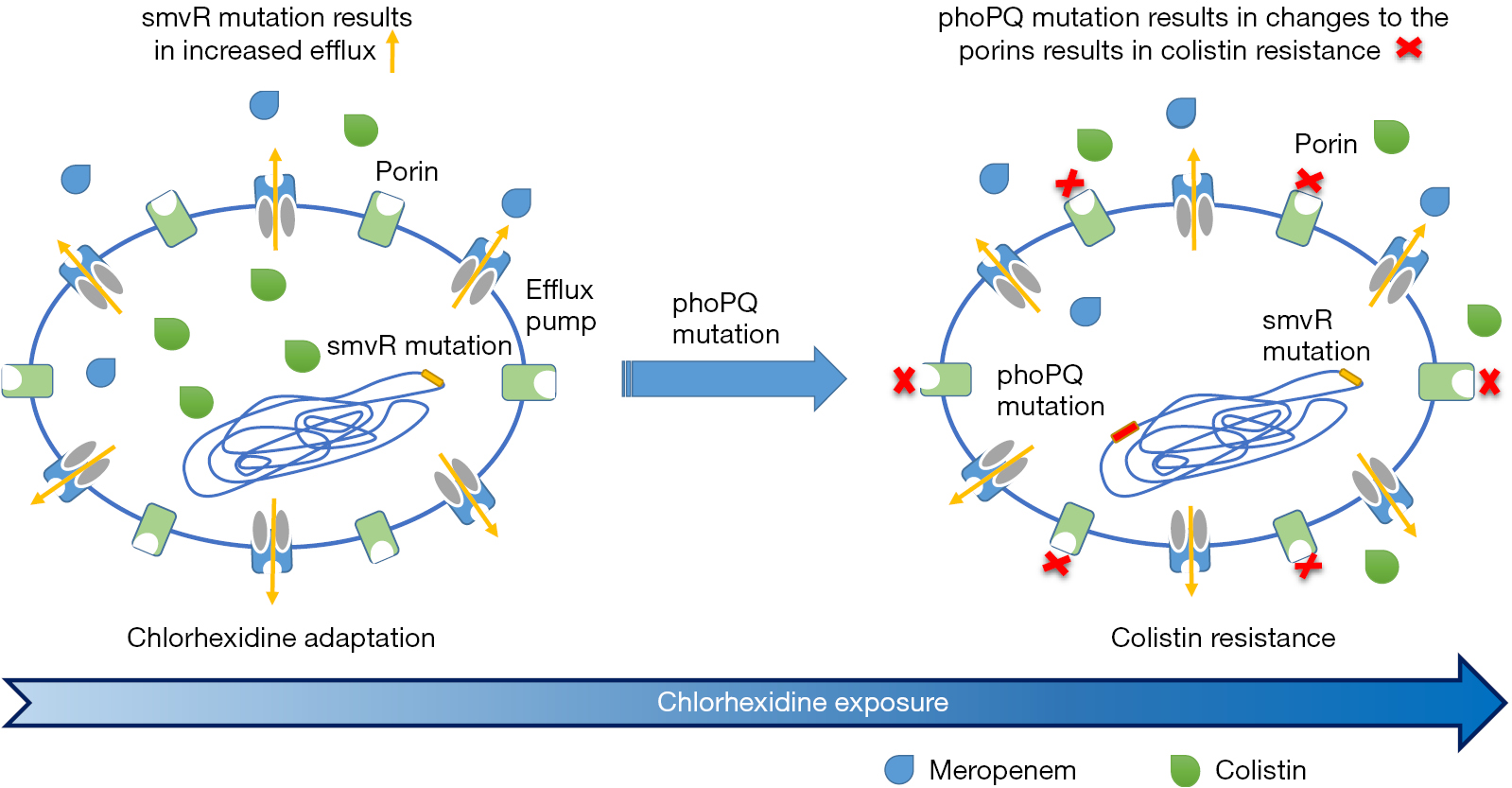 Figure 1 Mechanism of resistance and metabolic pathway. Klebsiella pneumoniae isolates that do not possess homologs to smvR are highly susceptible to chlorhexidine. Genome analysis of chlorhexidine-adapted strains and identified mutations in the two-component regulator phoPQ and/or a putative Tet-repressor gene smvR lead to colistin resistance (drawn by Chunhui Xu).

The finding can be taken as a warning because chlorhexidine is usually applied in decolonization strategy. This surprising new finding implied that exposure to chlorhexidine was associated with acquired resistance to colistin which stands as the last resort of antibiotics for treating MDR infections. So this discovery has significant clinical implications not only for infection prevention procedures but the therapeutic schedule of MDR infections as well. The new discovery revealed that inappropriate use of disinfectant might bring about a new path for pathogens to gain the ability of resisting to other sorts of antibiotics. Whether the application of decolonization strategy contained chlorhexidine in ICU patients with Klebsiella pneumoniae infection and/or colonization will affect the prognosis is still unknown. More researches about the important outcomes [e.g., mortality, length of ICU/hospital stay or ventilator-associated pneumonia (VAP) mortality] are needed to resolve the controversies.

The rate of qacA or qacB gene detected among MRSA elevated from 65% to 91% in the last decade. The raise of resistance to chlorhexidine together with mupirocin, is associated with decolonization failure (18,19).

In Lona Mody’s randomized study, intranasal mupirocin ointment (given twice-daily treatment for 2 weeks) was compared with a placebo in patients with persistent colonization of S. aureus or MRSA (n=127). During the study period (6 months) they found that mupirocin did have the significant effect of eradicating S. aureus, including MRSA primely [60/64 (94%)] while the clearance rate was only 86% (54/63) in the placebo group. However, it is incredible that the recolonization rate was up to 39% after 90 days in the mupirocin group while the rate of recolonization in placebo group was only 17%, P<0.05 (20). Although recolonization was both occurred in the two groups, the development of resistance was uncommon which led to further controversies.

One meta-analysis published in 2016 has concerned the trouble of carbapenem-resistant Enterobacteriaceae (CRE) and extended spectrum beta lactamase (ESBL) remained colonization or recolonization after decolonization in ICU. The systematic review included 37 studies, showing that a significant proportion of ESBL and CRE carriers remain colonized up to 1 year in the healthcare setting. It was similar to the control group (35.2% vs. 37.6%, P>0.05). Meanwhile, the development of resistance to decolonization antibiotics was reported in four studies including colistin and gentamicin (22).

It is well known that nose cavity is the main site of S. aureus colonization in human beings. However, the determinants of the host are not completely understood. Recent randomised controlled trials (RCTs) in including non-surgical patients could not verify the efficacy of S. aureus eliminating from nose cavity to prevent subsequent infection. Therefore, it is important for us to explore the mechanisms of S. aureus carriage in the host. Patients could be classified as an intermittent carrier or as a persistent carrier. The mechanisms of S. aureus nasal cavity carriage are multifactorial. Some scholars deduced that host characteristics co-determine the S. aureus colonization state in general and that an optimal fit between bacteria and host seems to be essential (23).

There are four essential conditions lead to S. aureus colonization in nasal. First, the contact of the two main components (nose and S. aureus). Second, S aureus has the chance or ability to adhere to specific receptors in nasal cavity. Third, immune defences of the host cannot eliminate S aureus initially. Last, S. aureus has the ability of propagate in the nose. It is imaginable that the innate immune response tries to prevent S. aureus from invading the mucosa heavily and causing a great deal of colonization or even severe infection. Thus, it is of great necessary for us to resolve the immunological mechanisms of colonization. Therefore, the best way to solve the problem of colonization is to adjust immunity of the host. Decolonization strategy cannot solve the root of the problem nor even the universal decolonization strategy.

The real effect of universal decolonization is uncertain

Whether the universal decolonization strategy could reduce the incidence of HAIs is still unknown. A meta-analysis showed the high heterogeneity of the five RCTs included (24). Different implementation such as the concentration and treatment duration of chlorhexidine might lead to different results, even in reducing the incidence of healthcare associated bloodstream infections (25,26).

In a prospective crossover study including 9,340 patients from five ICUs, the intervention group applied daily bathing programme with 2% chlorhexidine cloths while the control group use non-antibacterial cloths. The first stage lasted for 10 weeks followed by a 2 weeks washout period. Then all the units switched to the alternate group for another 10 weeks. During the whole study period, every unit included crossed over between bathing strategy 3 times. The results revealed that daily bathing strategy with chlorhexidine did not decrease the incidence of HAIs including CLABSI, CRUTI, VAP or CDI. The findings of this study could not provide evidence that critically ill patients will benefit from the universal decolonization strategy (27).