With developments in modern medicine, sepsis remains a worldwide medical challenge because of related high costs, morbidity, and mortality. Although the recognition and management of sepsis have advanced, mortality among patients with sepsis remains over 30%, and may climb to 60% when septic shock occurs (1). The updated definition of sepsis is “life-threatening organ dysfunction caused by a dysregulated host response to infection” (2). This new definition focuses not only on the excessive inflammatory response and immune suppression, but also on organ function. Ulinastatin (UTI) is a urinary trypsin inhibitor first discovered in urine in 1909 by Bauer and Reich. UTI is a natural serine protease inhibitor present in human blood and urine and composed of 143 amino acids. Because it has two Kunitz-type domains (3), UTI can inhibit the function of various enzymes. The human body contains endogenous UTI; levels increase with infection, operation, or shock. UTI has been shown to reduce the inflammatory response, suppress lymphocyte apoptosis, and improve the microcirculation, protecting the organs (4,5). However, most patients in previous studies (more than 800 patients) were treated with UTI in combination with thymosin alpha-1, making interpretation of the independent therapeutic potency of UTI difficult (6). Further studies are needed to confirm the effectiveness of UTI without thymosin alpha-1 in the treatment of sepsis. A prospective, double-blind, randomized, placebo-controlled trial of UTI in patients with severe sepsis showed that intravenous administration of UTI at a dose of 200,000 U twice daily for 5 days was associated with a reduction in 28-day all-cause mortality (the primary endpoint) to 7.3%, compared with 20.3% in the placebo control group (7). In that study, the mean patient age was below 40 years and the mean Acute Physiology and Chronic Health Evaluation II (APACHE II) score was under 15, values that obviously differ from those of patients in Chinese intensive care units (ICUs). Some recent researches indicate that treatment with UTI could reduce the 28-day mortality in critically ill septic patients (8,9). But it does not explore the different dose of UTI affect to the mortality of patients. In this study, we aimed to explore the effectiveness of UTI in the treatment of sepsis and to determine the proper usage by using a Cox proportional hazards model.

This study included 295 patients with sepsis treated in the ICU of the First Affiliated Hospital of Xi’an Jiaotong University from January 1, 2012 to December 31, 2017. All patients included in this study met the criteria of the Third International Consensus Definitions for Sepsis and Septic Shock (Sepsis-3), including confirmed or suspected infection and an acute change in total Sequential Organ Failure Assessment (SOFA) scores of ≥2 points (2). Patients under the age of 18 years and pregnant patients were excluded. All enrolled patients were divided into two groups, the UTI group and control group, based on UTI use during ICU stay. There were 234 patients in the UTI group and 61 in the control group. Using dose of the patients in UTI group were determined by professors according to the clinical situation of patients. Some studies indicate that UTI has dose-dependent effects, and it’s safety to use a higher dose of UTI in adult healthy Chinese volunteers (10,11). 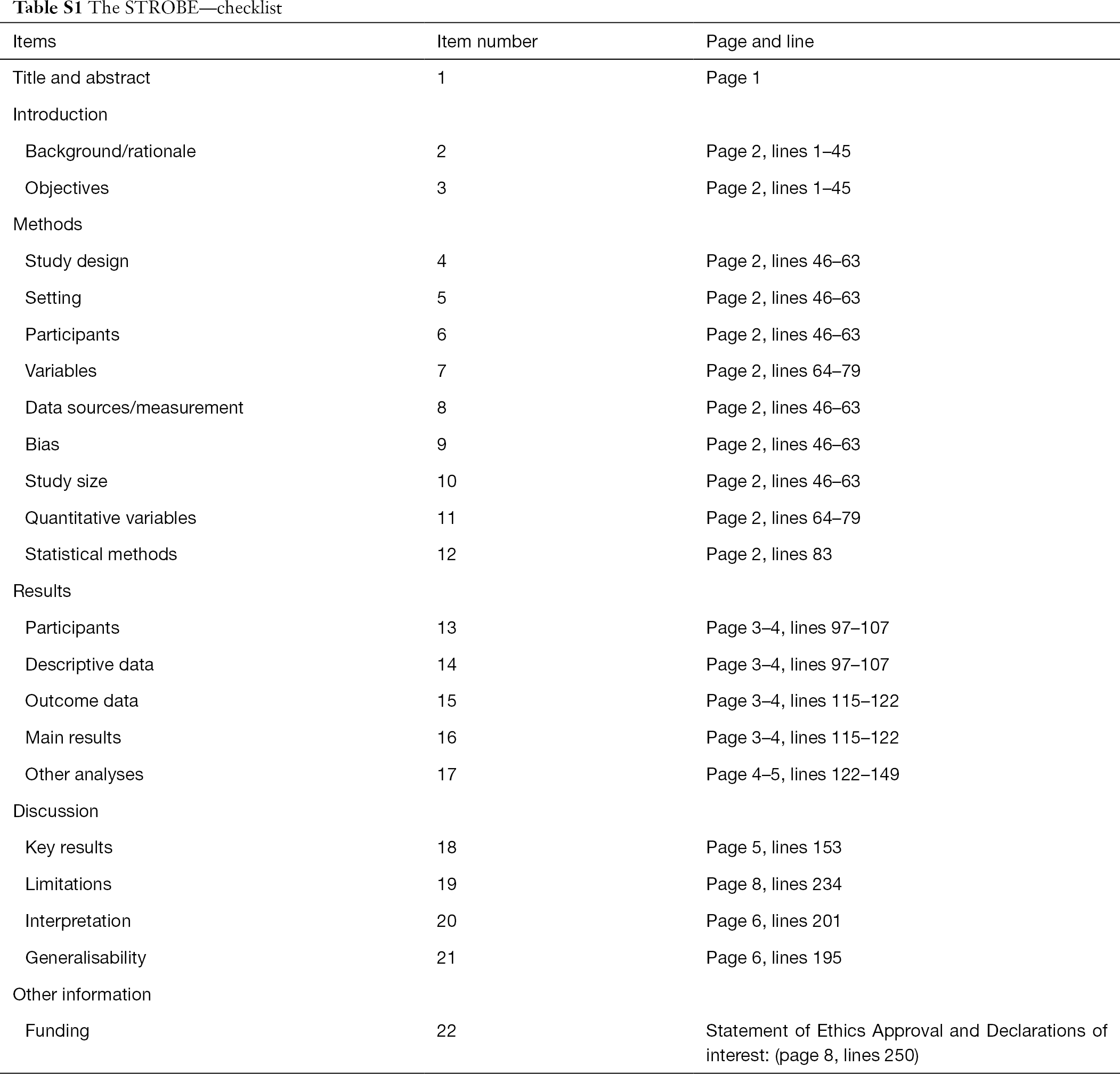 Categorical variables were reported as numbers and proportions and were analyzed with Pearson’s chi-square or Fisher’s exact test, as appropriate. Continuous variables that met the normality test were reported as means and standard deviations and were analyzed with an independent-sample t-test, or were reported as medians and interquartile ranges and analyzed with the Mann-Whitney U test (12). Variables that were statistically significant in univariate analysis were included in a multivariate Cox proportional hazards model (13). All statistical analyses were performed with SPSS 22.0 software. A P value <0.05 was considered statistically significant.

Baseline characteristics in the UTI and control groups

There were 234 patients in the UTI group and 61 in the control group. The UTI group had higher APACHE II scores, WBC counts, and lactate values than the control group, and was more likely to undergo blood purification and mechanical ventilation. There was no significant difference between the groups in sex, age, underlying disease, or most laboratory indices (Tables 1-3). 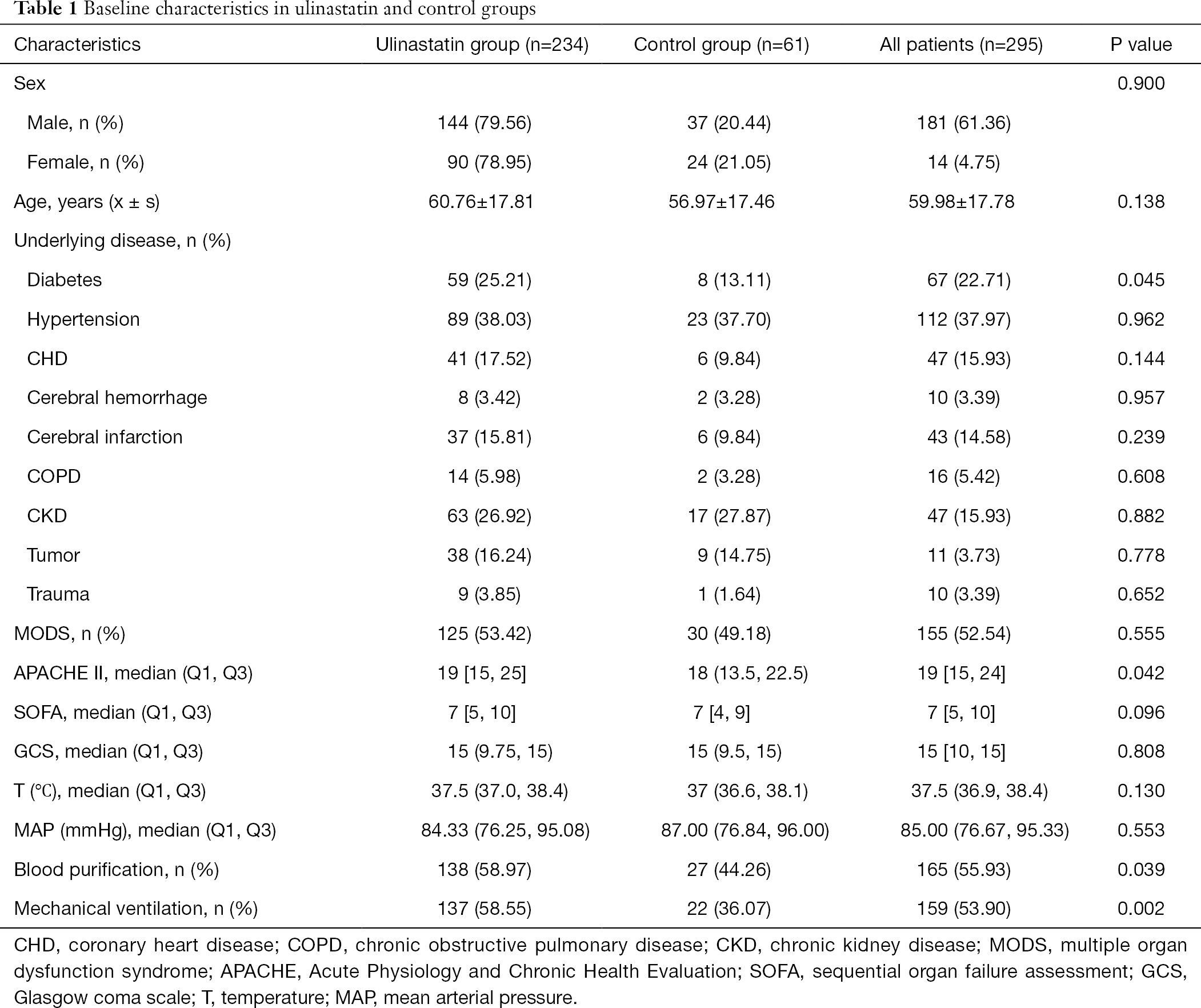 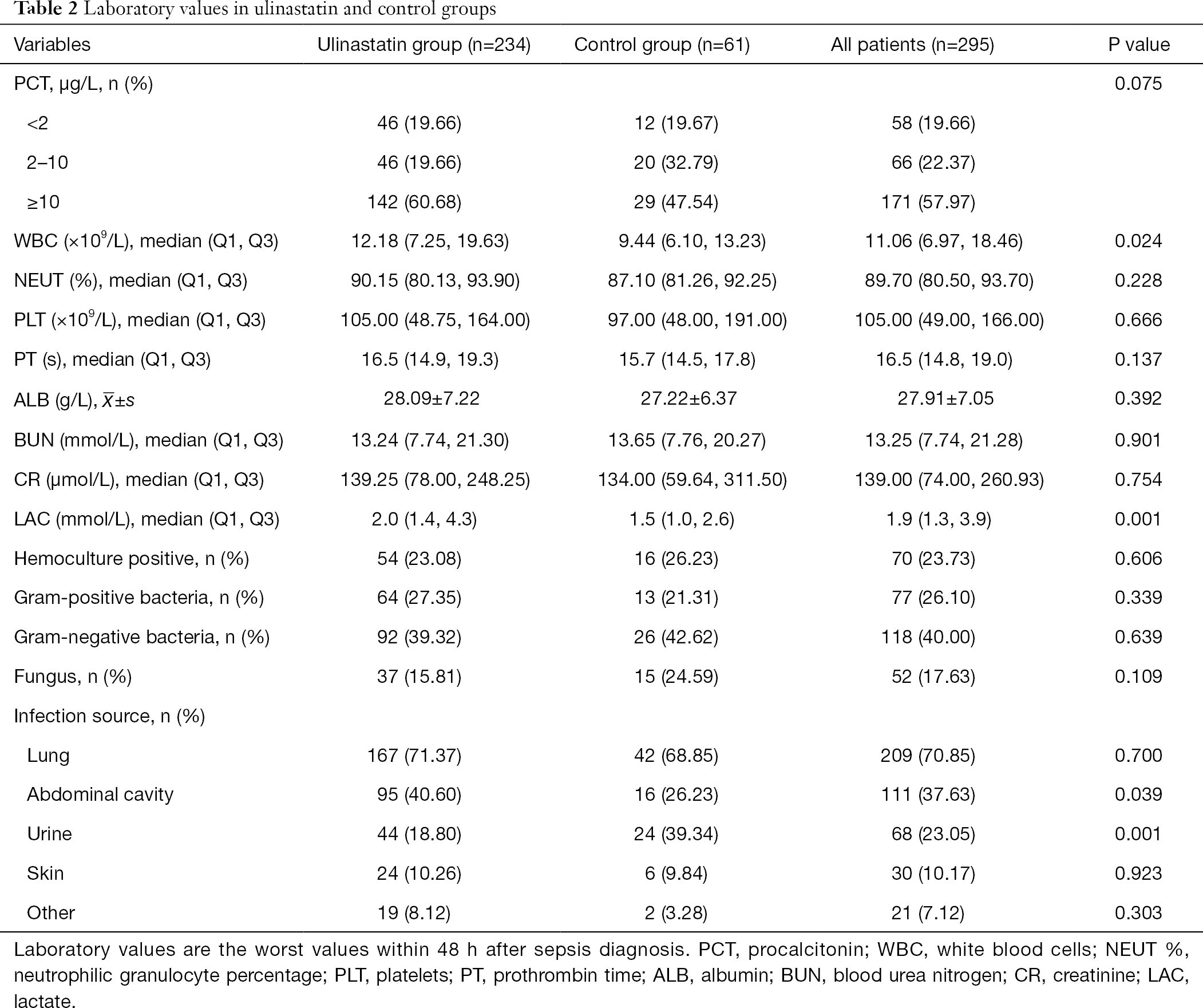 There was no significant difference in 28-day mortality between the UTI group (39.32%) and control group (47.54%, P=0.245). Univariate Cox regression analysis showed that the hazard ratio (HR) for mortality in the UTI group was 0.805 [95% confidence interval (CI): 0.530–1.222, P=0.308]. The survival curve is shown in Figure 1. After adjusting for confounding factors that were statistically significant in univariate analysis (Table 4) with a Cox proportional hazards model, the adjusted HR for mortality with UTI treatment was 0.560 (95% CI: 0.346–0.906, P=0.018). This finding provides evidence that UTI could reduce the 28-day mortality risk by 44% among septic patients. Outcomes are shown in Figure 2. 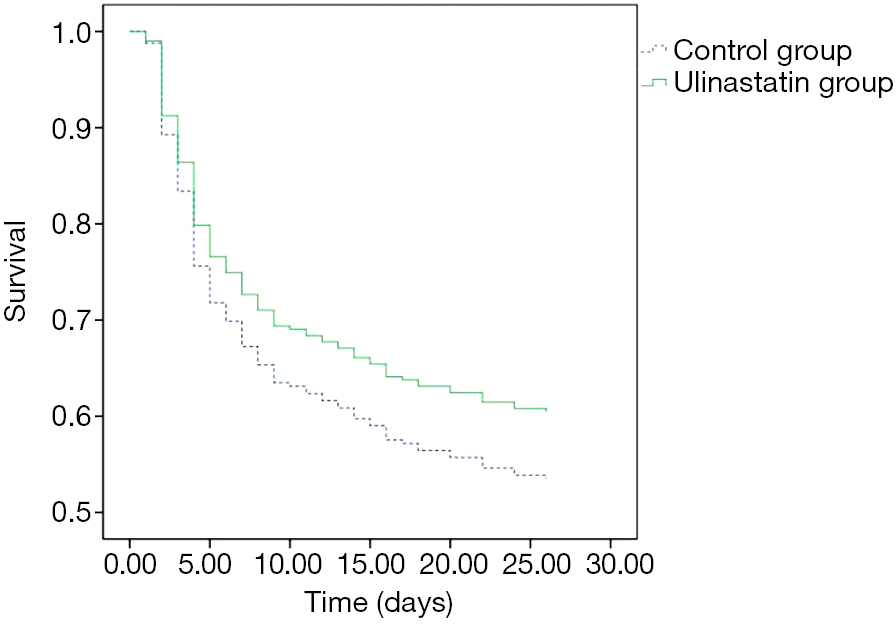 Figure 1 The survival curves of ulinastatin group and control group. 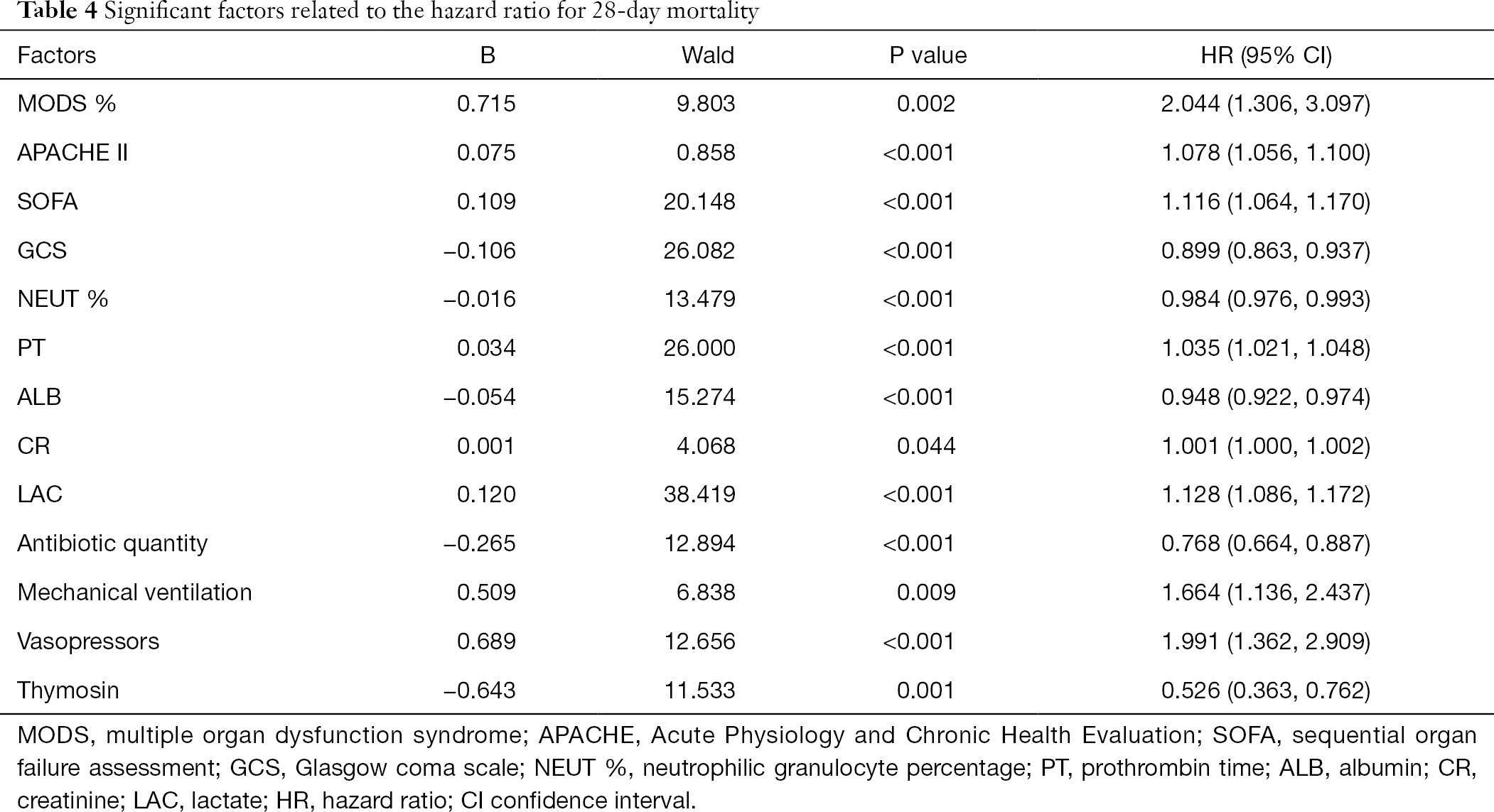 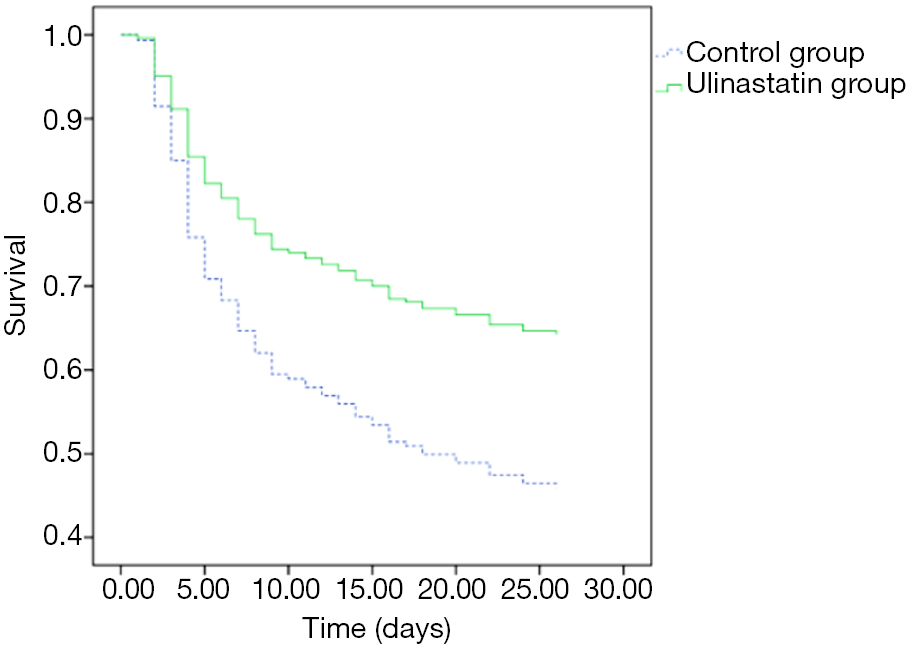 Figure 2 The survival curves of ulinastatin group and control group after adjusted.

Cox regression analysis on the usage of UTI 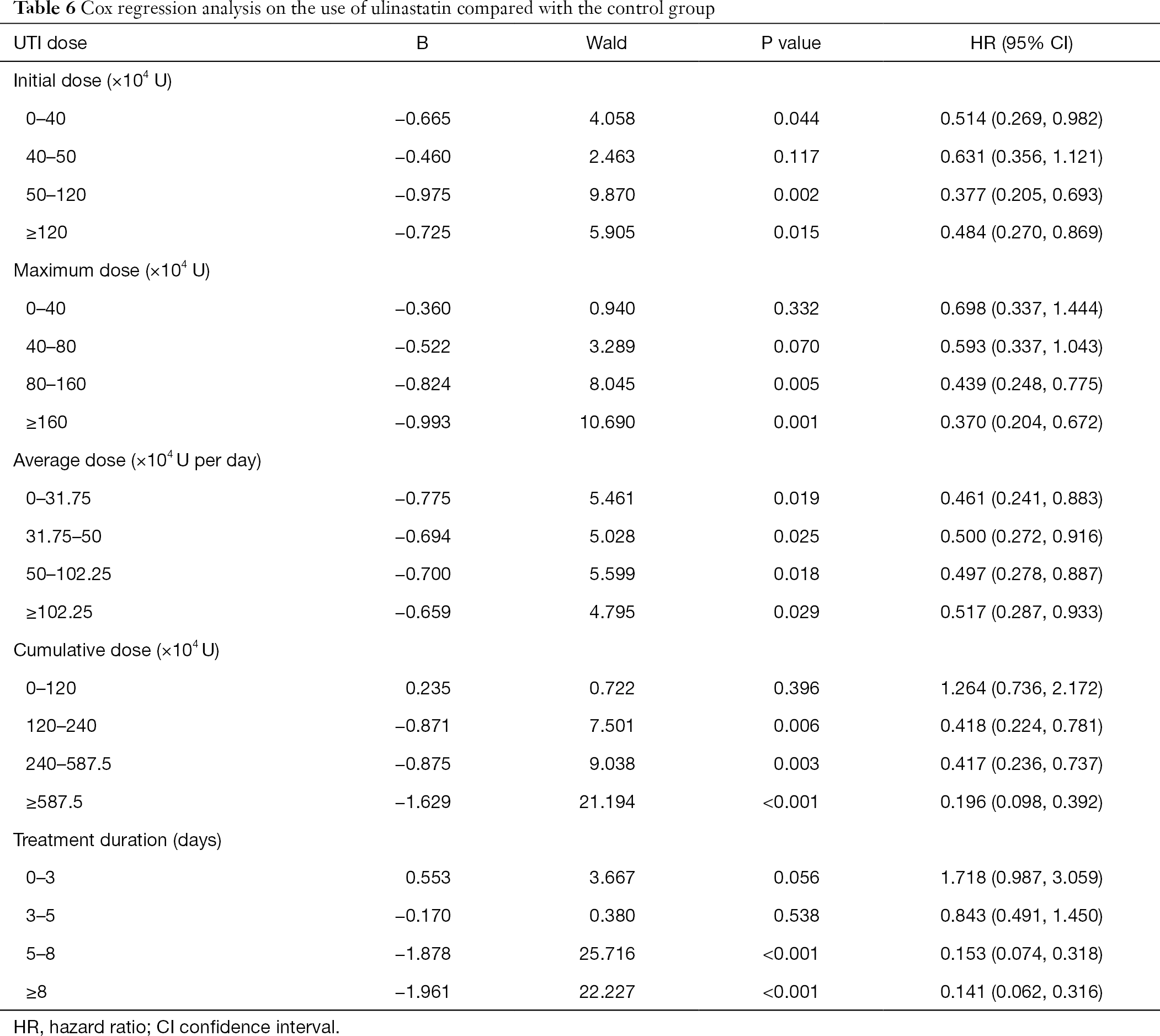 Sepsis remains a leading cause of death in the ICU, because the excessive inflammatory response damages vessels, endothelium, and organs. Many studies have established that UTI, a trypsin inhibitor, can inhibit inflammatory responses and oxidative stress, reducing organ damage by regulating some cytokine pathways. Most studies have found that UTI decreased ICU mortality, improved oxygenation, and decreased duration of stay. UTI can also reduce mortality among septic patients in a dose-dependent manner. However, most patients in previous studies (more than 800 patients) were treated with UTI in combination with thymosin alpha-1, making interpretation of the independent therapeutic potency of UTI difficult (5,6,9,14,15). A recent meta-analysis on UTI showed that the 28-day mortality rate was significantly lower in the UTI group than the control group (26.9% vs. 41.6%, RR =0.64, 95% CI: 0.54–0.75, P<0.01) (16). However, the eight studies included in the meta-analysis were not of high quality, and two were of low quality, which reduced the reliability of the results. A prospective, double-blind, multi-center randomized controlled trial in India (7) was included in this meta-analysis. That study reported that UTI significantly reduced the 28-day mortality rate of patients with sepsis (7.3% vs. 20.3%, P=0.045). In that study, the mean age was under 40 years and the mean APACHE II score was under 15; these values are obviously different from those among patients in ICUs in China. Therefore, we collected the clinical data of patients with sepsis in the ICU of the First Hospital Affiliated to Xi’an Jiaotong University from January 1, 2012 to December 31, 2017, aiming to explore the effectiveness of UTI in septic patients and to determine the proper usage by using a Cox proportional hazards model.

Among all 295 patients, 234 (79.32%) received UTI. Patients in the UTI group had higher APACHE II scores, WBC counts, and lactate levels, and were more likely to receive blood purification and mechanical ventilation than patients in the control group. The average initial UTI dose was 824,400 U/day; the average cumulative dose was 4,845,300 U, which was much higher than the normal dosage of 100,000 U to 200,000 U per dose, three times per day. However, the standard deviation and maximum and minimum values show that there were large differences in the use of UTI, which may relate to the differences in disease severity among patients, and the lack of generally recognized treatment guidelines. As known to all, each drug requires a daily dose, but UTI is used to treat sepsis, which usually needs to maintain over a period of time, so we considered it is necessary to understand the duration of use and the cumulative dose and to discover the effect on patient mortality.

Given the Cox multivariate regression analysis results, we can draw the following conclusions: (I) in treatment of sepsis, UTI could be beneficial to patients by significantly reducing the risk of death. (II) The effect of UTI in reducing the risk of death may be related to the dose and duration of treatment. In this study, the relative mortality risk in patients treated with UTI decreased with an increase in the maximum dose, cumulative dose, and duration of treatment. When the cumulative dose was less than 1,200,000 IU and the duration was less than 5 days, UTI had no significant effect on the RR of death in patients with sepsis.

The multivariate Cox regression analysis in this study was carried out for patients with sepsis who received UTI. However, the baseline data were different between the UTI and control groups because this was a retrospective study, which may reduce comparability between the groups. Although we considered 52 variables that may affect outcomes, it is possible that some variables were not included, so it is difficult to obtain clear conclusions. Because this was a single-center study, there may also have been some selection bias and the sample size may not be large enough to represent the general situation. Therefore, we look forward to large-scale randomized controlled clinical trials to confirm the effects and proper usage of UTI in sepsis.

We thank Rebecca Tollefson, DVM, from Liwen Bianji, Edanz Editing China (www.liwenbianji.cn/ac), for editing the English text of a draft of this manuscript.

Ethics Statement: The authors are accountable for all aspects of the work in ensuring that questions related to the accuracy or integrity of any part of the work are appropriately investigated and resolved. The study does not need ethical approval, because this study is a retrospective study in the real world, and the treatment of the patients conforms to the routine treatment of hospitals and relevant departments, and the data does not involve the privacy of patients.