A 41-year-old male presented to our emergency department after being involved in an all-terrain vehicle (ATV) accident with a tree. At the scene of the accident, the unconscious patient was resuscitated by a bystander. Emergent right thoracostomy and intravenous fluid resuscitation was performed in the prehospital setting. Patient complained of paraplegia and severe back pain after regaining consciousness. The patient was airlifted to our institution per high impact polytrauma protocol. Initial portable radiographs and FAST (focused assessment with sonography in trauma) were positive for multiple torso fractures and free fluid, respectively. Non-contrast CT head demonstrated a large amount of high attenuation material within the subarachnoid spaces (Figure 1). The observed density was subjectively thought to be greater than that which is usually seen with subarachnoid hemorrhage. No imaging findings of direct cranio-cervical trauma were found. Whole body contrast enhanced computer tomography (CT) demonstrated a fracture pattern consistent with an unstable translational-rotational injury, consisting of a three-column fracture-dislocation at the L1-2 level (Figure 2A). Injuries were predominantly on the right torso including: anterolateral right sided rib fractures, right pneumothorax, lateral lumbar hernias (bilateral), 3 cm laceration at the liver dome, right adrenal hematoma, right upper pole renal infarct and transection of the right proximal ureter (Figure 2A). No active arterial extravasation was identified. Interestingly, hyperattenuating contrast was seen outlining the spinal cord and clearly delineating the separated ends of the transected spinal cord (Figure 2B). The attenuation of the contrast within the thecal sac, on both portal and delayed phases, paralleled the contrast density within the renal collecting systems and was much greater than the blood pool in the aorta (Figure 2C). Multiplanar reformatted images revealed pooling of the contrast spilled from the transected ureter, into the disc space at level of the fracture-dislocation (L1-L2) and in turn communicating with the thecal sac through a presumed tear at the same level (Figure 3A,B,C,D,E). Finding were discussed with the trauma surgery team who proceeded to laparotomy for fluid resuscitation refractory shock. At laparotomy, a mesentery injury was identified, requiring resection of compromised terminal ileum and cecum. The abdomen was closed temporarily, leaving the ends in discontinuity. Concurrently, neurosurgery placed an external ventricular drain (EVD) while urology attempted primary stenting of the transection via cystoscopy. Intraoperative retrograde ureterogram further confirmed a full thickness ureteral transection, not amenable to stenting (Figure 3F). During second look laparotomy the next day, the bowel was primarily anastomosed, a diverting ileostomy performed and the distal right ureter ligated, with the plan for nephrostomy placement. Posterior spinal fusion of T12 to L3 as well as a right percutaneous nephrostomy was performed on hospital day four. Custom TLSO (Thoracic-Lumbar-Sacral Orthosis) brace with outlet for nephrostomy tube was ordered while the patient was maintained in Trendelenburg position. On day seven, the patient was able to sit up and was subsequently extubated and had the EVD removed. Unfortunately, the patient developed multifactorial acute kidney injury (including early rhabdomyolysis) and superinfection in the loculated retroperitoneal collection slowing his recovery. After a month-long hospital stay, discharge to an inpatient spinal cord injury rehabilitation center with short-term dialysis and delayed definitive urologic reconstruction is being planned. 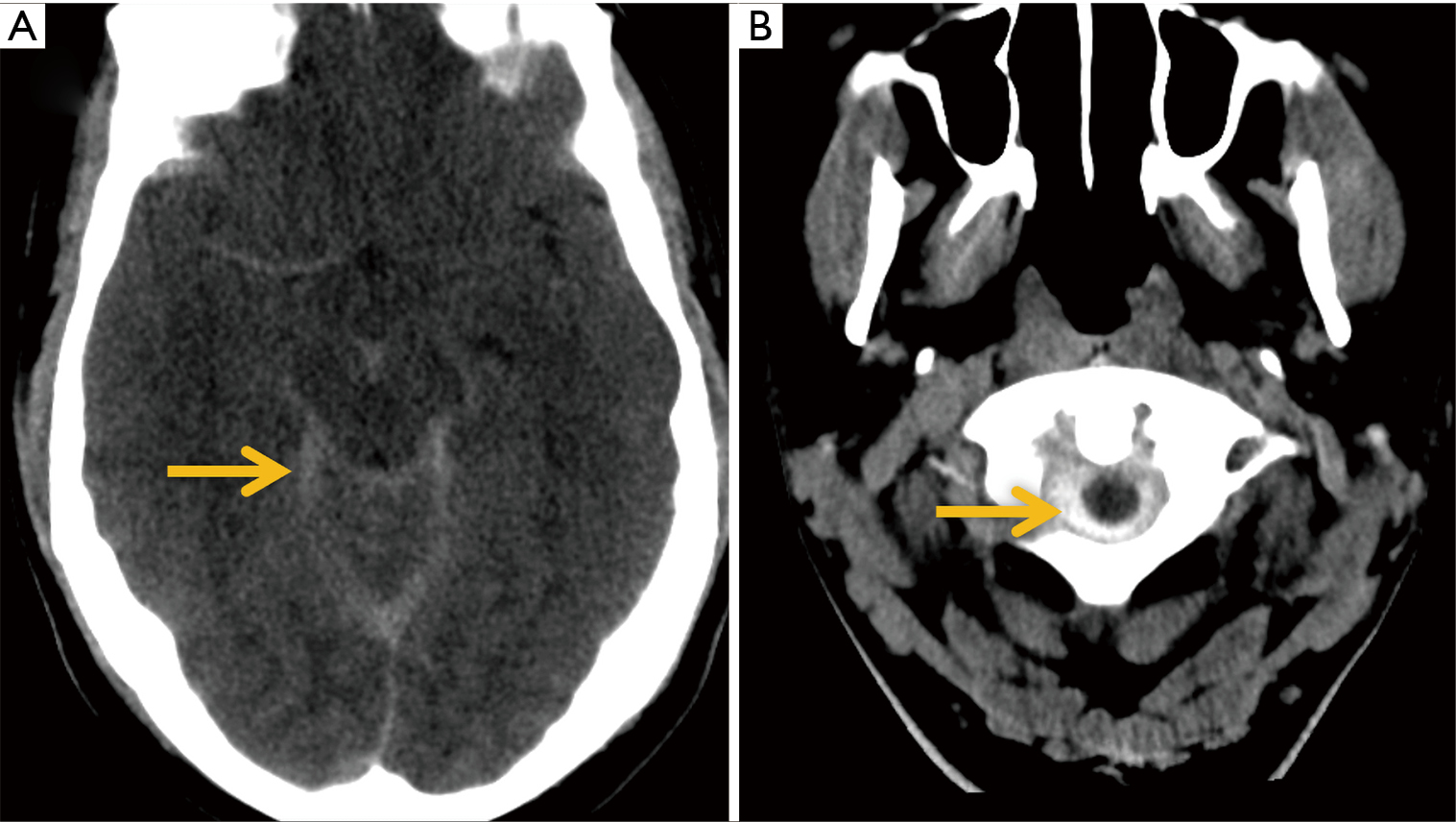 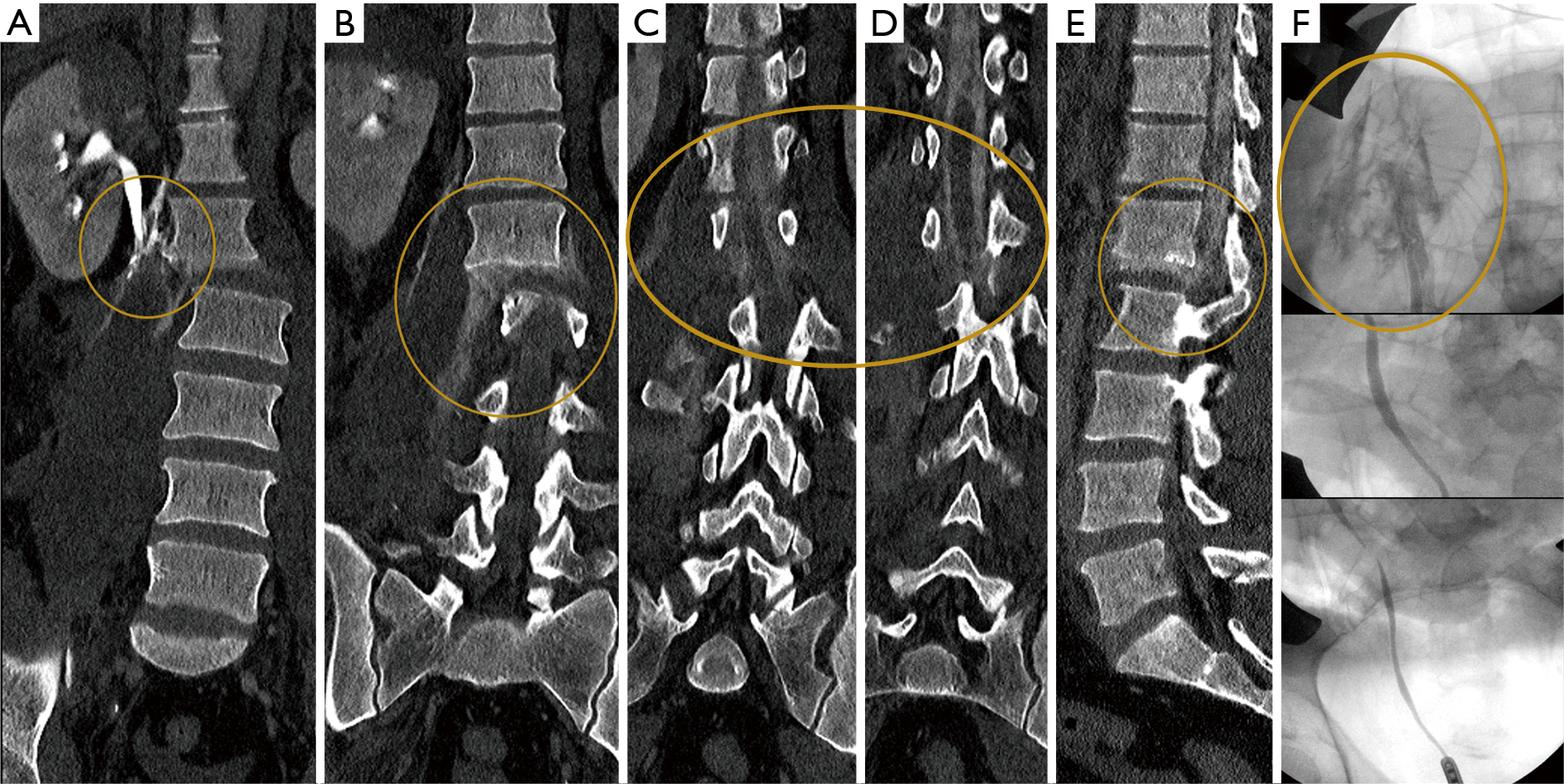 The thoracolumbar junction is prone to rotational and translational injury due to biomechanical transition from a relatively rigid thoracic spine to a flexible lumbar spine. The injury in this case would be classified as an Arbeitsgemeinschaft für Osteosynthesefragen (AO) type C injury (1,2) which is the second least common injury pattern in the thoracolumbar spine (14+8%) (3). Associated significant retroperitoneal trauma is expected in such injuries, given the high degree of direct and shear impact involved. The remarkable findings of a “urinary contrast myelogram” from a fistulous connection between the transacted ureter and torn thecal sac was quite intriguing in this case. At the outset, the appearance of a large volume of hyperattenuating CSF without CTA signs of aneurysmal rupture or significant traumatic injury to the head, were quite puzzling. Finding differential attenuation of intrathecal CSF versus blood pool was a very helpful imaging cue. However, direct visualization on multiplanar reformatted images of fistulous connection between excreted extravasated urine and the thecal sac ultimately clinched the diagnosis (Figure 3E). Retrospective review of the chart and conversations with our surgical colleagues revealed that the imaging diagnosis was quite debated at first amongst the surgical subspecialty teams. Therefore, amidst multidisciplinary ICU care processes, the obtained blood tinged CSF was never evaluated for urinary creatinine or other laboratory surrogates to further confirm the fistulous connection between the transected ureter and torn thecal sac. Although, we agree the hyperattenuating material could be partially attributable from spinal vascular trauma, the above mentioned indirect and direct findings were explicitly diagnostic. Although dural injuries are expected (4) with this injury pattern, traumatic ureteral injuries are very rare with any form of blunt abdominal injury (5). We were unable to find another case of traumatic uretero-thecal fistulization in the published English literature.

The remarkable “urinary contrast myelogram” depicted the clinically suspected spinal cord transection sufficiently, averting the need for further magnetic resonance imaging of the spine. Immediate spinal realignment was avoided in this patient due to the combination of irreparable cord transection at presentation and ongoing shock physiology (6). Fortunately, the diagnosis of an uretero-thecal fistula did not significantly alter the clinical management in this case. Percutaneous diversion of both urine and CSF, Trendelenburg positioning of the patent and spinal realignment and fusion within a reasonable timeframe, led to presumed resolution of uretero-thecal fistula.

Why should an emergency physician be aware of this?

This is a remarkable case of severe blunt traumatic injury resulting in ureterothecal fistulization and essentially, immersion of the brain and spinal cord in urine. The imaging cues and constellation of traumatic findings were key in the identification of this complication. Although recurrence of this exact scenario in regular practice is unlikely, we can definitely learn from the multifaceted and multidisciplinary decision making that was involved in the management of this case.