Rolling danger: the epidemiology of injuries caused by hover boards in the United States in five years (2011–2016)

Hover board (HBs) or so-called Electric Self-balancing Scooters (ESS) are two-wheeled, gliding motorized boards that have taken over the sidewalks and the social media recently (1). It is like a Segway but with no handlebars and it can travel at a top speed of 5 to 15 miles per hour changing its direction by shifting the rider’s weight distribution (1). Multiple conflicting reports about the original story of the HB invention. According to Wired, the device was likely invented by a Chinese company “CHEC Robotics” and was named “Smart S1”. The Smart S1 was released in August 2014. Nevertheless, this device became widely popular in United States by 2015 after numerous celebrity appearances with it (e.g., Justin Bieber, Niki Minaj, Nick Jonas, Karim Benzema) (2).

Recently, HBs have been related to numerous incidents of serious injuries and fires (3). The fire-related concerns were thought to be due to defect in their batteries and this had led some retailers to stop the sales of the HBS as well as to be banned by some airlines due to potential fire hazards (4,5). In December 2015, the United States Consumer Product Safety Commission (CPSC) issued its first warning concerning HBs and they launched an investigation regarding fires and injuries linked to HBs. The CPSC also emphasized in their statement on the serious injuries associated with HBs like concussion, fracture, contusion/abrasion and internal organs injuries. Finally the CPSC advised to wear proper helmet and padding when using the product (3).

The Canadian Hospitals Injury Reporting and Prevention Program (CHIRPP) also revealed similar reports to the CPSC but the Canadian data did not show any fires or explosions related to HB batteries (6).

As the popularity continues to rise, the main objective of this report is to provide an updated overview about the hazards and the injuries associated with the use of HBs in the United States.

Data of all patients reported to the United States National Electronic Injury Surveillance System (NEISS) that involved in an HB incident between January 2011 and November 2016 were collected. The NEISS data collects information on activity-related and product-related injuries treated in a network of approximately 100 hospital EDs representing around 6,100 hospitals of variable demographics in the United States. The NEISS database was initially established in 1972 and underwent multiple revisions (7). Trained medical coders from each hospital enter data in NEISS database for each emergency visit.

All NEISS cases involving HBs (code 5042) were extracted and reviewed. Cases were reviewed by two authors to ensure that cases meet the inclusion criteria. The inclusion criteria are all cases that have occurred while a rider is using a HB. The total cases reviewed were 77.

This study presented a general demographic data including age and gender. Other variables including, place of incident, mechanism of injury, injuries sustained, body parts and management and disposition. Simple descriptive analysis was used to present the data. Percentages were used for categorical variables; mean and interquartile range (IQR) were used for continuous skewed variables (8).

This study describes injuries caused by HBs in the United States from January 2011 till November 2016. There were 77 case reports of incidents in which HBs were involved. Table 1 showed the demographic features of patients involved in such incidents. The year 2016 and 2015 had the highest reported incidents of 47% and 34% of the total case reports respectively. The mean age of individuals involved in such incidents was 24.3 years with IQR from 6 to 96 years old. Males constituted 51% of the reported cases. Furthermore, 65% of incidents were reported to have occurred at home. Table 2 detailed the features of reported cases. In terms of mechanism of incidents, 64% of the cases were due to the HB catching fire. The second most common form is for injuries sustained because of fall from HBs. There were three cases in which the HB exploded. In addition, there were seven cases of severe injuries sustained because of the HB rider collided with a motor vehicle. The majority of cases reported have no bodily injuries that required treatment. However, there were 22 cases of fractures, 10 burn injuries and 8 of head injuries of varying severity. Hands and hips are the most common injured bodily parts. The most interesting finding of this study is that there were 9 fatalities from HB injuries during the study period. One of those was an in hospital mortality due to hemorrhagic shock secondary to severe pelvis fractures. The majority of deaths (7/9) were due to motor vehicle collision with the HB rider. The other two cases were due to falls leading to an abdominal blunt trauma in one case and a severe head trauma in another. Of note, 14% of case reports required hospital admission for further management and 3 cases required intensive care admission. There were 7 operations performed during the study period, one of which was an emergency thoracotomy for a blunt chest trauma in which the patient did not survive. 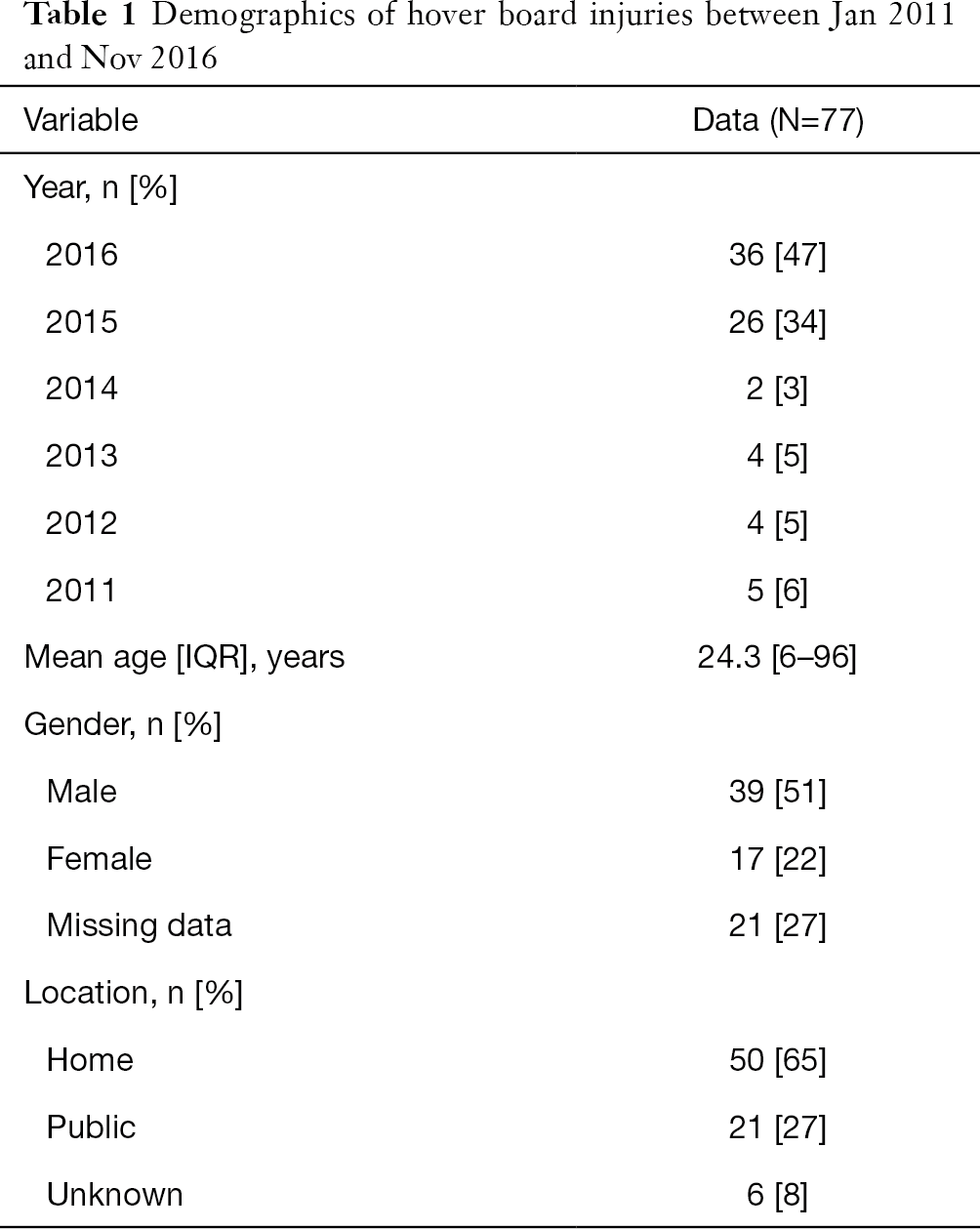 HBs have become popular and widely available for recreational use especially so in the past 3 years (2). In fact it is anticipated that their popularity is going to further increase with the emergence of a wireless charging feature and it is forecasted that the market for these devices would generate USD 1.39 billion in sales during the period 2016–2020 (9). Incidents related to HBs began to be reported in the NEISS database since 2011. This data reveals that the number of injuries related to the use of HBs has dramatically risen in the past two years. This is likely related to their increased popularity and the wide availability of these devices to consumers as well as improvement in the specific reporting of these incidents. It would have been expected that the most common cause of getting injured is falling off the HB. However, injuries related to the HB catching fire were the highest. In fact the risk of these devices causing fire has been so propagated that it has been banned by many airlines as well as many companies stopped selling them (4). Many products were also recalled to due that risk with over half a million units recalled according to the U.S. CPSC (10).

In this study, a significant number of injuries took place at home rather than outdoors. This may be related to the fact that many obstacles are present in the home environment, like furniture and walls; that can result in difficulty in maneuvering the relatively high-speed device and result in a subsequent loss of balance and fall. Or it can just simply be that there is a high use of HBs at home.

There were a number of cases caused by collision of riders with motor vehicles resulting in serious injuries. Almost all mortality cases in our study were related to collision with vehicles. Again this may be a result of the lack of a built-in efficient braking system that would allow the rider to slowdown in a controlled fashion if faced by a suddenly approaching vehicle. These incidents were mostly fatal suggesting that there is a significant hazard of using these devices on roads and that regulation of their use in such areas is warranted if not ban their use in public altogether. The latter has in fact already taken place in several countries and it is expected that the ban list will continue to expand (11).

In this study, the injuries sustained from falling off the HB did not seem to follow a specific pattern or have a predilection to specific body parts. They also seem to have a wide spectrum of severity, ranging from very minor injuries not requiring treatment, which constituted the majority of them, to very serious ones requiring surgery and intensive care with a number of them resulting in fatality. This may be related to the falls having a range of different mechanisms affecting the HB and leading to the rider falling off, the variation in the environments where these incidents take place, the surface or object that is collided with after the fall and the speed at which they happen. It is also possible that this study was not able to ascertain a specific pattern due to the limited number of cases included and certain patterns do exist but need a larger number of cases to be studied. Furthermore, this study included a wide range of ages with a mean age of 24. In another study that looked at musculoskeletal injuries caused by HBs in the pediatric age group, a pattern similar to those associated with skateboard use was found (1).

Ho et al have also reported on HB injuries presenting to a children’s hospital. They found that the most common injuries occurred in the distal radius, phalanx, humerus, and ankle, which is again a pattern that similar to injuries related to other wheeled recreation devices including scooters and skateboards (12). The fact that children may sustain a specific pattern of injuries can be due to their better ability to control the device as well as the fall when it takes place.

This study is the first of its kind to comprehensively report HB injuries using a national database and it provides a wide spectrum of adult and pediatric presentations; however, few limitations are worth mentioning. These are similar to many other studies that utilize the NEISS database to report on injuries. They include a likely gross underestimation of the actual number of injuries since only injuries reporting to EDs are included which may lead to missing many other ones that present to other health care settings. In addition, the number of minor injuries may be underrepresented as only the most severe injuries for each patient are reported. Furthermore, the mechanism of injury is gathered from case narratives and this leads to errors in reporting and interpretation. Finally, this study is unable to calculate true incidence due to lack of numerator and therefore temporal relationship is not presented.

The use of HBs increases the risk of sustaining different injuries among different age groups. Injuries can be either due to the device catching fire or due to falling off the device. Injuries can be variable in severity and can affect different body parts with no specific pattern. The use of these devices is hazardous and if they were to be used, protective equipment while using them is highly recommended.

Ethical Statement: The study protocol was approved by the Institutional Review Board of National Electronic Injury Surveillance System (NEISS) 2016 and was conducted in accordance with the revised Helsinki Declaration of 2008.The need for informed consent was waived, due to the retrospective nature of this study.